This picture taken on Jan. 19, 2014 shows part of the memorial in Harbin, dedicated to Ahn Jung-Geun, who shot and killed Hirobumi Ito in 1909
STR / AFP / Getty Images
By Emily Rauhala / Harbin

It is the morning of Oct. 26, 1909. Japan is tightening its grip on the Korean peninsula, and the Japanese governor of Korea, Hirobumi Ito, is due to arrive, by train, at the railway station in Harbin. Hiding on the platform is a Korean veteran of the anti-Japanese struggle, Ahn Jung-geun. He tucks himself into a line of soldiers, stashing his pistol in a lunch box. When Ito emerges, Ahn steps forward and shoots him dead. For this, Ahn is later executed by the Japanese.

This sanguineous story is the subject of a new museum in the city of Harbin, in northeast China. A joint South Korean-Chinese effort, the Ahn Jung-geun Memorial Hall stands in the V.I.P section of the city’s train station, not far from where Ito died. Since its opening on Jan. 19, the project has been given fulsome praise from South Korea and China — and has been roundly denounced by the Japanese.

East Asia is at war over history. Amid ongoing territorial disputes and rising nationalist sentiment, Japan’s imperial expansion and wartime record have become a focal point for the region. In late December, Japan’s hawkish prime minister, Shinzo Abe, rankled neighbors by visiting Yasukuni shrine, the resting place of 2.5 million war dead, including convicted war criminals. It was the first Prime Ministerial visit to the site since 2006.

Predictably, the move was unpopular. A spokesman for the Chinese foreign ministry called the visit an attempt to “whitewash” a history of “aggression and colonial rule by militarist Japan.” The U.S. expressed “disappointment,” urging Japan to find “constructive” ways to deal with sensitive issues. South Korea’s President Park Geun-hye blasted Abe for “by digging up the wounds of the past.”

The memorial hall has brought a fresh set of controversies. To Japan, Ahn is a criminal. Hirobumi Ito is a proud figure in Japanese history, an architect of the reformist Meiji constitution who served several times as Prime Minister. “We recognise Ahn Jung-Geun as a terrorist who was sentenced to death for killing our country’s first prime minister,” said Yoshihide Suga, a government spokesman.

Of course, this is exactly why he is revered in South Korea, which has an Ahn Memorial Hall of its own. The China project was first suggested by South Korean President Park Geun-hye at a meeting with President Xi Jinping last summer. Park’s father, former strongman Park Chung-hee served as a lieutenant in the Japanese army and studied in Japan. When he came to power in a 1961 coup, he normalized diplomatic relations with Tokyo, which provoked demonstrations. His critics considered him too close to the Japanese.

Honoring Ahn is an easy way for Park to bolster her nationalist credentials. Though Japan and South Korea are tied by trade, tourism, and an alliance with the United States, they remain very much at odds over history, particularly the fact that South Korean women were forced to work as sex slaves in Japanese military brothels. Many South Koreans don’t think Japan has adequately apologized.

It also gave Park a chance to engage with Beijing. China is a long-time ally of North Korea, but has warmed to the South under President Park. And it is not hard to muster anti-Japanese sentiment in China, particularly in Harbin. During the Japanese occupation of Manchuria, Unit 731 of the Japanese Imperial Army set up a base in Harbin to conduct germ-warfare experiments and medical testing. The site is now a museum where the Unit’s brutality is brought to life by videos, dioramas and modeling clay.

This helps explain why China is so keen to honor Ahn. “Ahn Jung-geun is, in history, an upholder of justice who fought against Japan’s aggression,” said Chinese Foreign Ministry spokesperson Qin Gang at a press conference. He dismissed Japan’s protest that the hall honored a terrorist. “If Ahn Jung-geun were a terrorist, what about the 14 Class-A war criminals of WWII honored in the Yasukuni Shrine?”

The rhetoric has a cooled a bit for now. A week after the grand opening, the hall saw a small but steady stream of visitors, though the number of foreign journalists easily matched the number of people simply stopping by to take a look. The small, two room space boasts a commemorative bust, some photographs, and samples of Ahn’s calligraphy. A plaque marks the spot where Ito fell.

Outside, on the hall’s rebuilt facade, the clock is stuck at 9:30 a.m., the moment Ito was killed. 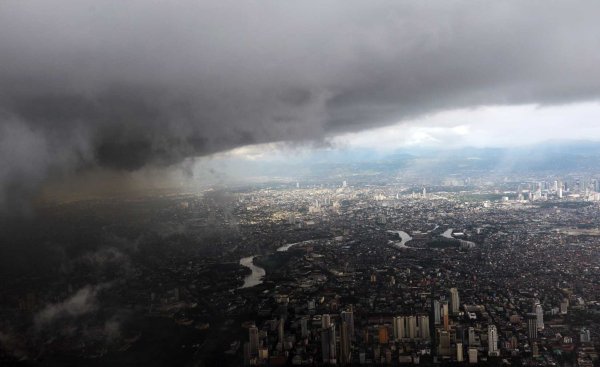 The Philippines Is Still Paying the Price for That Supertyphoon
Next Up: Editor's Pick