After a two year hiatus, Sherlock is back and better than ever. The first episode of the third season, “The Empty Hearse,” premiered on U.S. television last night (all three episodes of the third season have already aired in the U.K.). The episode was filled with winks to Sherlock fanboys who have been cooking up conspiracy theories as to how the detective survived “The Reichenbach Fall” — both the name of the last episode of Sherlock, and the name of the waterfall where Sherlock and Moriarty supposedly plunge to their deaths in Sir Arthur Conan Doyle’s original story.

Here are the best moments from the episode:

The Snog with Molly

Just like in the books, Sherlock survived The Reichenbach Fall. (Though Conan Doyle intended Sherlock to remain dead, but brought him back by popular demand.) So how did Sherlock do it?

Theory number one: Sherlock Holmes (Benedict Cumberbatch) bungeed off the roof far enough that John Watson (Martin Freeman) saw him fall before the bike hit Watson. Then after Watson was knocked to the ground, he bungeed back through a window and paused for a make-out session with Molly Hooper before striding out the door to disappear forever. Sherlock’s accomplices disguise Moriarty’s corpse (which has been pushed onto the pavement) with a mask. As Watson rushes to Sherlock, he is hypnotized for another few seconds by famed magician Derren Brown (the UK’s answer to David Blaine) who then changes the time on Watson’s watch. Finally, Watson reaches the body in what he thinks to be a reasonable time to see what he believes to be his dead friend.

Okay, so we knew it wasn’t real when Sherlock locked lips with Molly but it was still pretty cool.

Mycroft Holmes, who hates to go into the field oh-so-much, disguises himself as a bad guy to retrieve Sherlock from his “holiday” taking down Moriarty’s crime ring. Despite all the effort he must have put in to go undercover, he doesn’t intervene while Sherlock is being tortured. Instead Sherlock must use his powers of deduction to convince his torturer that his wife is cheating on him and thus save himself. The torture scene itself feels very reminiscent of the Bond films, especially that particularly squirm-worthy one in Casino Royale.

It turns out, Mycroft has been in on the fake death the entire time. Though Watson believed that Mycroft was responsible for Sherlock’s demise, it turns out that he purposefully planted information with Moriarty to lure him onto the roof with Sherlock.

The Watson-Sherlock reunion isn’t quite the heartwarming moment some may have expected. Watson practically strangles Sherlock after he shows up from the dead mid-marriage proposal.

Sherlock mistakenly believes Watson’s life simply stalled while Sherlock was gone. “What life?” he asks. “I’ve been away.” But in fact, Watson has gotten a new job, a new place, fallen in love and grown some questionable facial hair. A good chunk of the show is spent on mustache jokes because they’re simply too easy.

Though Watson’s wife could have been a potential barrier between the two detectives, it turns out she’s sharp, funny and a fan of Sherlock Holmes. After Watson punches Sherlock in the face for not letting him in on the secret of his fake death, Mary tells Sherlock that she will convince John to come around. Plus, she and Sherlock later save Watson’s life — together. (She’s an awfully good sport considering Sherlock selfishly interrupted her engagement.) Looks like this will be less of a Yoko Ono situation and more like the Three Musketeers. Let the bromance on Baker Street live on!

Not-so-fun fact: she apparently received death threats from fans who thought the character of Mary would come between Sherlock and Watson.

AKA the scene that almost broke the Internet. In another nod to Sherlock fans, the audience was treated to a second Reichenbach Fall theory, this one involving Moriarty and Sherlock conspiring together to fake their deaths…and then kiss each other. Gifs galore!

All of these conspiracy theories that the show plays out did exist on the Internet. Sherlock is one of the first shows to directly respond to fans’ concerns (as expressed on Twitter and Tumblr) and even poke fun at them. They even filmed a fake scene just to mess with fans’ heads. Seems cruel. But that kiss almost makes up for it.

The Holmes parents exist and are normal people. They like to go to Les Mis, and Mycroft has to take them. Wonderful.

The Return of the Bromance on Baker Street

It’s curious that Sherlock in all his wisdom didn’t divine that the terrorist attack was going to take place on Guy Fawkes Day until so late into the episode. But then he wouldn’t have had to speed across London on a motorbike to save Watson from a bonfire had he divined the terrorists’ intensions earlier. Remember, remember the fifth of November.

Sherlock gives Watson a good scare by pretending he doesn’t know how to diffuse the bomb on the train. (There’s always an off switch. Remember that, Hollywood.) The two get to exchange heartfelt goodbyes and apologies — something they never had the chance to do before Sherlock’s first fake death. Only then does Sherlock reveal his trick. All is forgiven. They laugh, they cry. They’re friends again.

Okay, so here’s how Sherlock actually did it. After feeding Moriarty information about Sherlock, Mycroft lets Moriarty go so the master criminal will think he has won. Before Sherlock and Moriarty meet, Sherlock and Mycroft work out 13 possible scenarios that result from that encounter. Each is given a code name. Sherlock texts Mycroft “LAZARUS” to set the correct plan in motion.

An ambulance blocks Holmes’ view of Sherlock’s fall, so Sherlock is able to land on an airbag. While Sherlock’s hired actors gather up the airbag, Sherlock’s body is replaced with that of a doppelganger — the same doppelganger Moriarty used to scare the kidnapped children in The Reichenbach Fall episode, so they would scream at the sight of Sherlock, and arouse suspicion among the police. Sherlock knew his doppelganger had to be dead somewhere (Moriarty wouldn’t have let him live) and enlisted Molly to help him find the body in one of the city’s morgues.

A well-timed cyclist knocks out John long enough that Sherlock can cover himself with blood and place himself on the pavement. He uses the ball we see him bouncing earlier in Molly’s office to cut off his pulse by placing it under his armpit. John feels Sherlock’s pulse—or lack thereof—and believes him to be dead.

There’s another mysterious bad guy — presumably even more evil than Moriarty or Irene Adler — but we’ll have to wait until the third episode to find out more about him. But we can bet that no matter their encounter, Sherlock will survive this season. As he puts it, “Oh please, killing me? That’s so two years ago.” 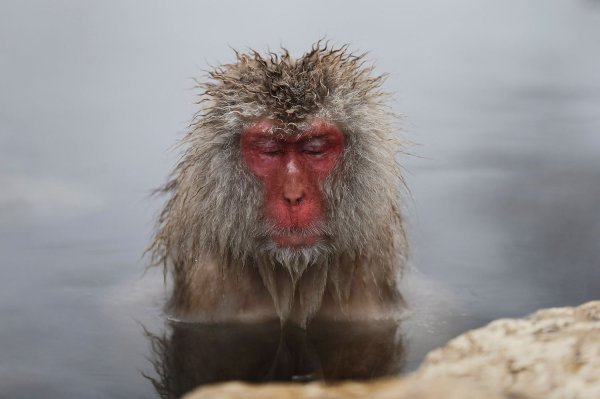 These Monkeys Are Having the Best Spa Day Ever
Next Up: Editor's Pick