Pebble and Glyph: How Crowdfunding Is Creating Disruptive New Products

While a lot of people watch TV or YouTube or spend their downtime resting or playing, I find that I can be highly entertained by surfing the various crowdfunding sites that have popped up on the Internet over the past few years.

For most of my 33-year career, when entrepreneurs wanted to start a new business or create a new product, they had to go to venture capitalists, funding angels, banks, or in some cases even mortgage their houses to start up their businesses. Although this has been effective for many, thousands of others who had product ideas could not muster up the funding needed, and many products or service ideas died before they ever even had a chance to be created.

Then a few years back, a new source for startup funding popped up: crowdfunding. At its core, a crowdfunding site serves as a kind of clearing house for people with new product ideas that span everything from gadgets to games to books to movies and many more projects for which a person needs funding to bring an idea to life. One of the leading sites is Kickstarter, a service that got major public attention when it was used to crowdfund the Pebble smartwatch.

Here’s the quick version of Pebble’s funding story, according to Wikipedia:

I wanted a good smartwatch, so when I saw it was live, I paid my $115 and was lucky enough to be in one of the first groups to receive the Pebble when it shipped. Since the Pebble started shipping, dozens of other smartwatches have been announced. Kickstarter and Pebble will always be seen by many as ground-zero for the smartwatch market — a market many believe will become a very big segment in the emerging wearable computing arena.

I also like perusing Indiegogo, another crowdfunding site, and Quirky, a site for crowdsourced product ideas. The folks from Mashable listed some other sites that do crowdfunding and are worth checking out.

Since my first backing of a product through Kickstarter, I have found at least a dozen other products that I wanted from various crowdfunding sites, and I continue to look for cool new things that are of interest to me. I also am highly interested in products that not only get major attention but that also get funded fast, since they often represent a product that could impact the future of the product category they represent. This was very true with the Pebble smartwatch: The short time it took the watch to reach its funding success suggested to us researchers that the Pebble struck a nerve with the public. The smartwatch category could potentially be big.

At CES there was a product launched from a company called Avegant: the Glyph. It went live on Kickstarter less than a week ago and met its funding goal of $250,000 within 4 hours. It holds the record for reaching a goal of $250,000 the fastest — done in 3 hours and 56 minutes. (Pebble’s goal was only $100,000 but was reached in two hours.)

The Glyph looks like a high quality stereo headset, but with a fascinating twist to its design. You pull the headpiece down over your eyes and it turns into a set of video monitors to deliver a cinema-like experience, with video content that can come from a smartphone, tablet or PC. It can be connected to the HDMI port on PCs and uses HDMI mini adapters to work with tablets and smartphones. Unlike another head-mounted display from Oculus, the Glyph works with any existing content in Windows, Android and iOS. Software has to be written for the Oculus platform and its focus is specifically on gaming.

Although the Glyph project is still a prototype, the alpha version I played with was very impressive. In headphone mode, it looks and works just like a high-end stereo noise-canceling headset with a battery life of 48 hours. But when you flip the headband down over your eyes, it turns it into a 2D or 3D screen, depending on the content (if you connect it to a 3D DVD player, the content is shown in 3D, for instance). One downside from the first generation is that it has only three hours of battery life in video mode.

The alpha model I tested was also a bit heavy, but the folks from Avegant say that when it’s released this fall, it will be thinner and lighter and will fit better than the alpha model. One other important feature is that it includes diopter controls, so that regardless of your prescription, you can fine tune it so that if you wear glasses you won’t need them.

Once I used the Glpyh, I really wanted one. As a traveler that puts 100,000+ miles under my belt each year, I could see using this while on planes as my audio headset and also my video screen. Although I do use laptops or even my iPad Air for watching movies when traveling, the cinema-like experience that the Glyph delivers is more enticing to me. Its $495 price is also impressive. A good set of noise-canceling headphones costs around $399. For $100 more, you get the cinema video feature, too. It also works with games. Pull one of the games up on a smartphone or tablet, and the Glyph delivers a cinematic view of the game you’re playing, and the smartphone or tablet becomes the controller. Although travelers and gamers might represent its initial audience, I see this product as having a very broad appeal, too.

While Google Glass and other glasses and video-specific goggles will have a place in the market, the Glyph delivers what I think is the next major innovation in headsets. The screens on smartphones and small tablets are just not optimal for delivering really good movie, video or gaming experiences. The Glyph delivers those experience along with a great audio experience. It would not surprise me if many of the top of the line headsets eventually deliver similar video viewing features as part of their offerings, since the Glyph delivers quite a compelling concept for mobile entertainment. The product’s first-mover position will have a big impact on how consumers view this audio/video category in the future.

This is a product to watch since it could become another crowdfunded project that opens up a whole new category of devices. 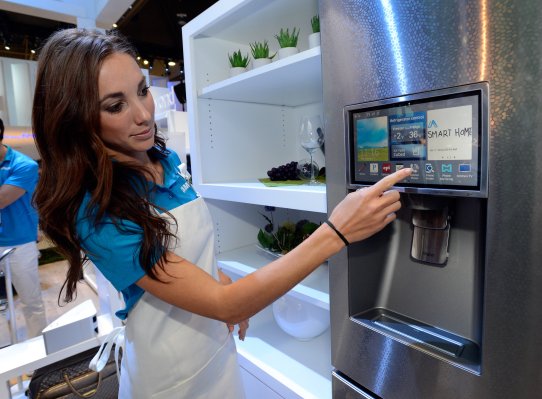 The Next Big Thing for Tech: The Internet of Everything
Next Up: Editor's Pick