Yes, free travel and free housing are possible for writers thanks to with two new residency programs. This isn’t a open-ended free-for-all, however: Note that the free travel comes via Amtrak, and the free houses being given away are in Detroit.

A couple dozen writers’ dreams may come true, courtesy of … Amtrak? America’s national rail service recently introduced the #AmtrakResidency program, in which up to 24 writers will be granted a free round trip on one of Amtrak’s long-distance routes. “Each resident will be given a private sleeper car, equipped with a desk, a bed and a window to watch the American countryside roll by for inspiration,” the application form explains. In exchange for a rail journey valued at up to $900, the writer is expected to, well, write while on board, in long form (blog posts, poetry, maybe a few chapters in a novel) and short form (Twitter) alike. Applications are being accepted on a rolling basis through the end of March.

As a post on The Wire summed up in late February, the writer-in-residency idea is one that popped up and evolved over the course of several months. In an interview in December, the author Alexander Chee mentioned his love of writing on trains, and that he wished “Amtrak had residencies for writers.” The comment kicked off tons of discussion—and similar yearnings—by writers on Twitter, and eventually Amtrak reached out to one of these writers, Jessica Gross, to see if she’d be interested in a train writer-in-residency test run. Of course, she was “on board,” and the results can be seen partially in a piece published by The Paris Review, in which Gross ruminates on (of course) train travel, among other things. A brief excerpt:

(MORE: College Offers to Pay Students to Take a Year Off)

Apparently the test run was considered a success, because Amtrak opened the residency program up to the masses last week. Understandably, Chee, the program’s unintentional visionary, was overjoyed. “It’s one thing to dream about these things. It’s another thing to try to create them,” Chee said in an NPR interview. “And usually when people try to create residencies for artists and writers, you have to go through so much red tape.”

Amtrak haters, on the other hand, are using the residency program as an excuse for criticizing the rail operation, which has a very long history of losing money. In a letter sent to Amtrak’s president (and the media), U.S. Senators Jeff Flake (R-AZ) and Tom Coburn (R-OK), wrote of the residency program, “Given Amtrak’s prodigious annual taxpayer subsidies, this plan raises multiple red flags.”

In Detroit, meanwhile, a program offers writers a lot more than just a train trip. Various artist colonies welcome writers-in-residences to free lodging for a year or some other specified period of time. But the non-profit Write a House project stands out because if a participating writer fulfills the program’s requirements—including living in a rehabbed Detroit home and writing about the experience for two years—the house is his or hers to keep. Three houses are up for grabs, and project organizers are in the process of raising money and renovating them.

“People who move here will have to be prepared for some boarded-up houses on their blocks,” Sarah Cox, co-founder of Write a House, explained to the New Yorker. “But you’ll get the opportunity to be part of a community, own a house, and see real change happening.”

Applications will start being accepted this spring.

Other kinds of artists aren’t entirely left out of such freebie-barter arrangements. As frommers.com pointed out recently while highlighting Amtrak’s new residency program, Canada’s Via Rail service grants free food and long-haul trips to singers and musicians in exchange for performances in the economy-class lounge car.

“It’s such a charming place to play music, and it’s a captive audience to say the least,” one musician said to the Globe and Mail of his experience playing on the train. “There’s not that much space for an audience, in the tens of people for sure. So it is really intimate.” 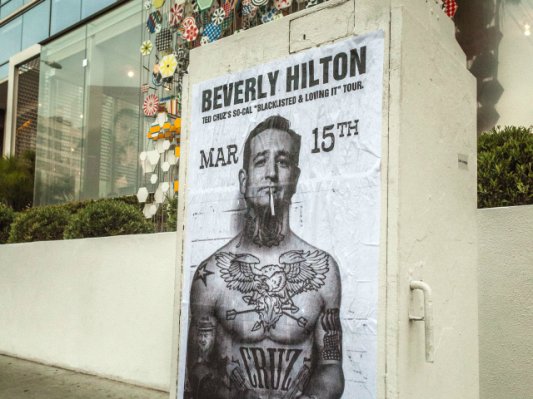 Ted Cruz Shows Off His Tattoos In L.A.
Next Up: Editor's Pick