Telescope BICEP2 (in the foreground) and the South Pole Telescope (in the background) in Antarctica, on March 31, 2007.
Steffen Richter—Harvard University/EPA
By Michael D. Lemonick

The Theory of General Relativity seemed truly bizarre when Albert Einstein first articulated it 99 years ago: gravity, the great physicist declared, was no longer to be seen as a force, but rather as the warping of “spacetime,” an amalgam of those two formerly independent concepts. The theory also predicted that violent events should trigger gravitational waves, which would set spacetime rippling, like a vat of cosmic jello. There has been some circumstantial evidence of those ripples, involving changes in orbits of binary stars, but what’s always been missing is a smoking gun, direct observational measurement of a gravitational wave.

The same is true of the Inflationary Universe theory, postulated in the 1980s: just .0000000000000000000000000000000000001 seconds (give or take) after the Big Bang, the theory said, the cosmos underwent a burst of expansion so furious that it was briefly flying apart faster than the speed of light. Exceeding light speed is supposed to be impossible, except that that law applies only to something moving through spacetime, not spacetime itself expanding. Just as with gravitational waves, there’s plenty of reason to think it really happened, but again, no proof.

Not until now, anyway. In a discovery physicists are calling “huge,” “extraordinary” and “spectacular,” a team of observers using a microwave-sensitive telescope at the South Pole has found the first direct evidence of gravitational waves—and the strongest proof of inflation to date, all in one shot. “When I got the call,” says Marc Kamionkowski, a theorist at Johns Hopkins University who wasn’t involved in the research, “I had to ask if it was real. To me, this is bigger than the Higgs boson.” If it’s confirmed by other groups, says Avi Loeb, chair of the Harvard astronomy department and also not a participant in the research, “it’s worth a Nobel.”

According to Kamionkowski, one of few physicists allowed to see the scientific paper before it was announced at a press conference today, that confirmation is likelier than not. “These are extremely careful and conservative people,” he says of the team that made the observation. “They’ve had this evidence for three years, looked at every alternative explanation for what they were seeing, and systematically ruled them out one by one.”

For a finding of this enormity, the critical bit of evidence John Kovac of the Harvard-Smithsonian Center for Astrophysics and his colleagues saw seems entirely innocuous: a slight distortion in microwave radiation left over from the Big Bang. These microwaves didn’t even exist until about 400,000 years after the Big Bang happened, far later than the inflationary scenario—which occurred before the universe had aged even a billionth of a trillionth of a quadrillionth of a second—could have played out. But when the microwaves did pop into existence, the cosmos should have still been jiggling with gravitational waves set off by the violence of the inflation. Spot the jiggles and you prove both the expansionary phenomenon and the existence of the waves left over from it.

That’s what Kovac and his colleagues did, though it wasn’t literally jiggles that they saw. Instead they noticed that the background radiation was polarized, its waves of electromagnetic energy oscillating not in random directions but in just a few specific ones. (Sunlight also oscillates in random directions; polarizing sunglasses work by letting in only the rays within a narrow range of orientations.) That microwave polarization suggests that something was shaking the radiation this way or that.

The telescope the researchers used—the Background Imaging of Cosmic Extragalactic Polarization 2, or BICEP2, instrument—is tuned to see the critical kind of polarization in background radiation, but there was no guarantee it ever would. Inflation theory comes in several versions, all of which posit different intensities. “In some,” says MIT’s Alan Guth, who was one of the inflationary universe theory’s original inventors, “the waves are so weak they could never be detected. To see them turn up is beautiful.”

What made the gravitational waves—and thus the polarization they caused—so powerful has to do with why the universe inflated in the first place. Physicists like Guth had already theorized that inflation would happen as the cosmos transitioned from one energy state to another, much as water changes to ice. That transition released huge amounts of energy, which turbocharged the already-expanding universe. Also like water, which goes from vapor to liquid to solid, the post-Big Bang universe went through several such transitions, all during the first fraction of a fraction of a second of its life.

The amount of polarization—dictated by the strength of the gravitational waves—suggest that the transition that triggered the high-speed inflation occurred when the universe was at the so-called grand unified scale. That’s the point at which electromagnetism, the weak nuclear force and the strong nuclear force, all of which have vastly different strengths and effects today, were a single force. “It represents about a trillion times the energy scale produced by the Large Hadron Collider,” says Loeb, referring to the world’s biggest accelerator, where the Higgs was found.

The new results, assuming they’re verified, now rule out some of the more complicated, exotic versions of inflation, which seemed favored by cruder measurements made last year by the European Planck satellite. “Some people liked those,” says Guth, “because they got to write complicated papers about them.” But in physics, simpler ideas are usually considered more elegant.

Also ruled out by the detection of gravitational waves, according to both Guth and Loeb, is at least one of the few viable alternatives to the Big Bang. Known as the ekpyrotic universe model, it posits that the cosmic microwaves we’ve been detecting since the 60’s came from the titanic collision between two “branes”—short for membranes—which were independent universes (one of which was ours) floating around in higher-dimensional space.

The new results do have to be verified. Even though the BICEP2 team methodically checked and rechecked its work to rule out any mistakes, nobody, including Kovac and his colleagues, can be 100 percent certain until independent groups, using their own instruments, see the polarization signal too. That shouldn’t take long, given that cosmologists at Princeton, Berkeley, the University of Minnesota, the Goddard Spaceflight Center, the University of Chicago and more were already in the hunt. “Whether it’s correct or incorrect“ says Kamionkowski, who strongly favors the former, “will be known very quickly.”

Meanwhile, the BICEP2 team has already started taking data with a more powerful telescope called the Keck Array, also at the South Pole, and is hard at work building yet another, called BICEP3, which will begin flexing its muscles next summer. Extraordinary as the new results are, they’re just a taste of the science that will come out of these new instruments. “I’ve made 23 trips to the Pole in my career so far,” says Kovac, “and I’ll be making a lot more.” It’s a long, cold journey—but to understand the first moments of cosmic creation, it’s clearly worth it.

More: The Sights And Sounds Of The Solar System From NASA’s Deep Space Network 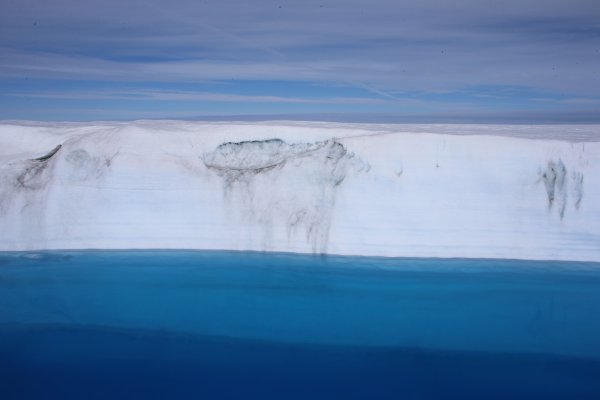 Climate Change Is Melting Greenland's Ice
Next Up: Editor's Pick