Rep. Charles Rangel: For Too Long, Congress Has Ignored Infrastructure

When I first described as “our community’s 9/11” what we now know was a gas explosion, I was referring to the chaos and shock that resulted from the tragic incident that occurred in the heart of my beloved congressional district in East Harlem on Wednesday morning. While it was neither a terrorist attack nor comparable to 9/11 in scope and scale, the suffering from loss or injuries of loved ones has been as painful and horrific to the entire community where I was born and lived all my life. Still, I could not be more proud of the first responders and the Red Cross, as well as Governor Andrew Cuomo and Mayor Bill de Blasio, who have provided immediate assistance to my constituents for which I am grateful.

We have to wait for the findings from the National Transportation Safety Board team’s investigation, but it is apparent that the catastrophic gas explosion has been caused by poor and outdated infrastructure. According to the Center for an Urban Future’s recently released report, New York City’s gas mains are on average 56 years old, with most of them made of materials that are highly leak-prone. Altogether, the City needs almost $47 billion worth of infrastructure upgrades by 2020. It is costly, but we will pay a higher and terrible price if we ignore it.

In fact, our nation’s overall infrastructure is in dire condition. The American Society of Civil Engineers, in its 2013 Report Card for America’s Infrastructure, gave a near-failing grade of D+ based on physical condition and needed investments for improvement. For too long, Congress has ignored the urgent need to provide funding that directly impacts the health, safety, and welfare of the public. Before any other community across the country suffers great destruction, we must commit to shoring up our 20th century infrastructure that simply cannot keep up with the demands of the 21st century.

This is why we should support President Barack Obama’s fiscal year 2015 budget request, which lays out a long-term plan that expands economic growth, makes critical investments in our future, and reduces the deficit. The President’s 10-year request includes proposals aimed at enhancing the role of private capital in U.S. infrastructure investment as a vital additive to the traditional roles of federal, state, and local governments. It also calls for the creation of an independent government entity, such as the National Infrastructure Bank or similar financing vehicle, in addition to the enactment of the America Fast Forward Bonds program and other tax incentives to attract new sources of capital that can help buttress our nation’s infrastructure.

Today, New Orleans stands strong with upgraded levees. These are nothing like the flawed structures that failed in 2005 during Hurricane Katrina, killing more than 1,800 people and causing nearly $125 billion in damage. The new system will greatly reduce flooding, even in 500-year storms, because it was rebuilt with enhanced engineering and durable construction materials to provide state-of-the-art protection to the residents of the Gulf Coast who have courageously overcome the devastation and destruction caused by the deadly hurricane.

I am fortunate to represent a community where people have offered their homes, hands, and prayers to help their neighbors in any way that they can. Our community is resilient and will recover from the tragedy stronger and as united as ever, just as our country did after 9/11. Congress must subsequently fulfill its obligation to the American taxpayers to ensure public safety. While we cannot stop Mother Nature from wreaking havoc in our communities, lawmakers must do what we can to invest in sustainable infrastructure that will insure against preventable harm.

Charles B. Rangel is a 22nd-term Congressman representing New York’s thirteenth congressional district, which includes Upper Manhattan and parts of the Bronx. 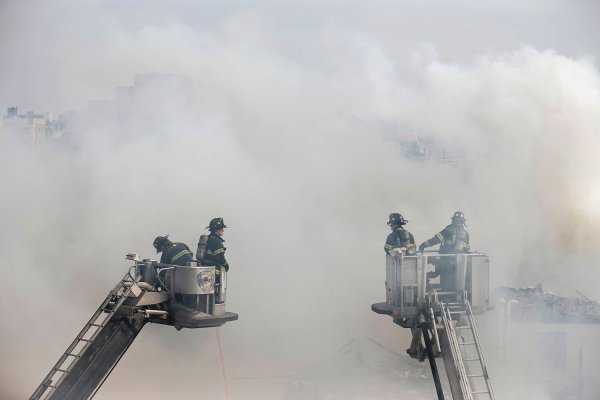 New York City Is Crumbling
Next Up: Editor's Pick