Vietnamese Air Force Col. Pham Minh Tuan uses binoculars on board an aircraft during a mission to search for the missing Malaysia Airlines Flight 370 in the Gulf of Thailand, on March 13, 2014.
AP
By Dan Hirschhorn

Authorities from both Asia and the U.S. appeared to expand their hunt for Malaysia Airlines Flight 370 all the way to the Indian Ocean on Thursday, as one possible clue of its whereabouts was discounted and the Malaysian government faced growing anger over its handling of the disappearance.

Malaysian authorities expanded their search westward toward India, the Associated Press reports, acknowledging that the plane carrying 239 people may have flown for hours after it lost contact with air-traffic controllers on Saturday and disappeared without a trace. Meanwhile, multiple reports indicated the U.S. was also moving its search in that direction. The New York Times, citing Pentagon officials, reported that an American destroyer was being redeployed to the Strait of Malacca, which is west of Malaysia and the area where search efforts have been largely focused.

“We’re looking at information, pursuing possible leads, working … within the investigation being led by the Malaysian government,” White House press secretary Jay Carney told reporters on Thursday. “And it is my understanding that one possible piece of information or collection of pieces of information has led to the possibility that a new … search area may be opened in the Indian Ocean.”

But six days after its disappearance, authorities were no closer to finding the Boeing 777. Malaysian authorities followed up on satellite images that China had said might show a crash site, but found nothing, the AP reports. “There is nothing. We went there, there is nothing,” acting Malaysian Transport Minister Hishammuddin Hussein said.

Meanwhile, there was a rising tide of anger from other Asian nations over how Malaysia has handled information about the search. Carney declined to join that pile-on when he spoke Thursday. “I can’t evaluate this process until it comes to an end,” he said. 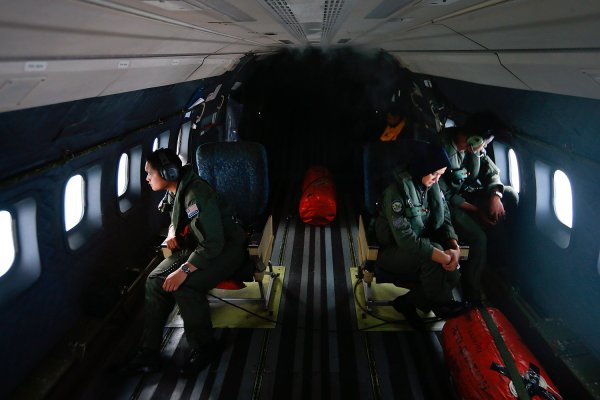