Put the Sex Back in Sex Ed

Fertility is the missing chapter in sex education. Sobering facts about women’s declining fertility after their 20s are being withheld from ambitious young women, who are propelled along a career track devised for men.

The refusal by public schools’ sex-education programs to acknowledge gender differences is betraying both boys and girls. The genders should be separated for sex counseling. It is absurd to avoid the harsh reality that boys have less to lose from casual serial sex than do girls, who risk pregnancy and whose future fertility can be compromised by disease. Boys need lessons in basic ethics and moral reasoning about sex (for example, not taking advantage of intoxicated dates), while girls must learn to distinguish sexual compliance from popularity.

Above all, girls need life-planning advice. Too often, sex education defines pregnancy as a pathology, for which the cure is abortion. Adolescent girls must think deeply about their ultimate aims and desires. If they want both children and a career, they should decide whether to have children early or late. There are pros, cons and trade-offs for each choice.

Unfortunately, sex education in the U.S. is a crazy quilt of haphazard programs. A national conversation is urgently needed for curricular standardization and public transparency. The present system is too vulnerable to political pressures from both the left and the right–and students are trapped in the middle.

Currently, 22 states and the District of Columbia mandate sex education but leave instructional decisions to school districts. Sex-ed teachers range from certified health educators to volunteers and teenage “peer educators” with minimal training. That some instructors may import their own sexually permissive biases is evident from the sporadic scandals about inappropriate use of pornographic materials or websites.

The modern campaign for sex education began in 1912 with a proposal by the National Education Association for classes in “sexual hygiene” to control sexually transmitted diseases like syphilis. During the AIDS crisis of the 1980s, Surgeon General C. Everett Koop called for sex education starting in third grade. In the 1990s, sex educators turned their focus to teenage pregnancy in inner-city communities.

Sex education has triggered recurrent controversy, partly because it is seen by religious conservatives as an instrument of secular cultural imperialism, undermining moral values. It’s time for liberals to admit that there is some truth to this and that public schools should not promulgate any ideology. The liberal response to conservatives’ demand for abstinence-only sex education has been to condemn the imposition of “fear and shame” on young people. But perhaps a bit more self-preserving fear and shame might be helpful in today’s hedonistic, media-saturated environment.

My generation of baby-boom girls boldly rebelled against the cult of virginity of the Doris Day 1950s, but we left chaos in our wake. Young people are now bombarded prematurely with sexual images and messages. Adolescent girls, routinely dressing in seductive ways, are ill-prepared to negotiate the sexual attention they attract. Sex education has become incoherent because of its own sprawling agenda. It should be broken into component parts, whose professionalism could be better ensured.

First, anatomy and reproductive biology belong in general biology courses taught in middle school by qualified science teachers. Every aspect of physiology, from puberty to menopause, should be covered. Students deserve a cool, clear, objective voice about the body, rather than the smarmy, feel-good chatter that now infests sex-ed workbooks.

Second, certified health educators, who advise children about washing their hands to avoid colds, should discuss sexually transmitted diseases at the middle-school or early-high-school level. But while information about condoms must be provided, it is not the place of public schools to distribute condoms, as is currently done in the Boston, New York and Los Angeles school districts. Condom distribution should be left to hospitals, clinics and social-service agencies.

Paglia is the author of Glittering Images: A Journey Through Art From Egypt to Star Wars 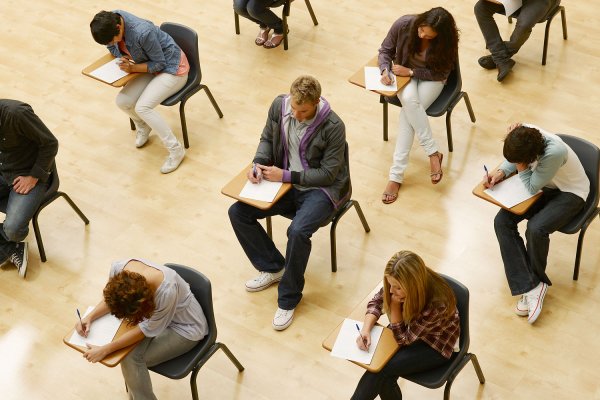 The New SAT Doesn't Come Close to the World's Best Tests
Next Up: Editor's Pick