Pope Francis has had an extraordinary first year. He attacked economic injustice, placed mercy at the center of his pastoral approach, and traded the culture war for the culture of encounter with statements such as, “Who am I to judge?” The Catholic Church has been reenergized by the humility of his actions and inspired by his profound words of wisdom and love. He was the most searched person on the Internet in 2013, and has made his way onto the cover of Rolling Stone and other popular periodicals that rarely feature religious figures. And he was rightly named TIME’s Person of the Year.

Yet one of the pope’s key initiatives stands out for its abject failure: his push for a peaceful resolution to Syria’s civil war. On September 7, 2013, he called for a day of fasting and prayer for peace in Syria, which resulted in neither the establishment of a just peace nor even a cessation of the conflict that has raged since Syrian dictator Bashar al-Assad began killing peaceful protesters.

The day of prayer did not occur until the prospect of American intervention was raised, even though more than 100,000 Syrians had been killed, chemical weapons used, civilians in breadlines bombed, and Assad’s regime had perpetrated countless other crimes against humanity. Some observers, like me, were left wondering whether this was a call for genuine peace, along with the action necessary to secure it, or simply a mobilization against American intervention.

Now the crisis in Syria has only gotten worse. More than 140,000 people have been killed in Syria, including more than 10,000 children. Over 9.3 million Syrians are in need of aid. Children remain traumatized by Assad’s barrel bombs and many continue to see their access to education and healthcare disrupted by this hellish civil war.

By inserting himself into the conflict and failing to support a realistic plan to secure peace, the pope has failed in his responsibilities. His biggest failure has been his unwillingness to speak with moral clarity on the illegitimate nature of Assad’s regime and to side with the Syrian people against Assad’s continued rule.

The Vatican placed all of its eggs in the basket of the failed Geneva II peace talks, which few experts thought had any prospect for success. A representative of the Vatican has even compared any potential Western intervention in Syria to the War in Iraq, despite the fact that Syria today is a far worse humanitarian catastrophe, and calls for an invasion and occupation are practically nonexistent. As Assad bombs civilians, the Vatican is spending its time slaying straw men.

To be clear, few want the pope to be a cheerleader for war or even for limited military action by Western democracies that would undermine Assad’s capacity to brutalize the civilian population. No one expects him to analyze all the potential military options that have been considered and reach decisive conclusions on the likely proportionality and justness of each. What can and should be expected from the pope is for him to remind us of our ethical obligations.

Pope Francis should have evoked the Responsibility to Protect (R2P) doctrine and called on the international community to act collectively to halt the mass murder of civilians in Syria. He should have reminded everyone that it is the dignity of human persons, not the sovereignty of states, that is inviolable. If he was unwilling to admit that force may have been necessary to achieve peace, he should not have categorically ruled out the possibility.

In doing so, he would have been drawing on his predecessor’s endorsement of the responsibility to protect and the Catholic Church’s commitment to universal human rights. Before the United Nations in 2008, Pope Benedict XVI said, “Recognition of the unity of the human family, and attention to the innate dignity of every man and woman, today find renewed emphasis in the principle of the responsibility to protect.” He also warned against an overly deferential view of sovereignty, saying, “It is indifference or failure to intervene that do the real damage.”

Pope Francis would be wise to heed those words today. The principle of solidarity calls on all nations to act to end the mass atrocities that are being perpetrated in Syria today. This may require the use of force. And if the United Nations will not act to shift the status quo and make peace possible, the world’s liberal democracies should.

In just one year, Pope Francis has transformed the way countless people view the Catholic Church and organized religion. In his second year, the pope must side with the Syrian people and demand that Bashar al-Assad, the latest Butcher of Damascus, step aside, a necessary first step on the path to peace.

Robert Christian is the editor of Millennial and a PhD Candidate in Politics at The Catholic University of America. 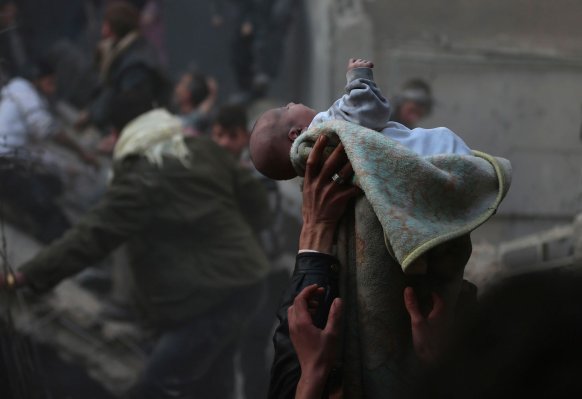 Syria Is One of the Most Dangerous Places on Earth for Children
Next Up: Editor's Pick