You’re walking down a street and catch a glimpse of yourself in a store mirror. Except it’s a window, and someone who looks exactly like you is shopping inside.

A lot of people have felt that frisson — not in life, necessarily, but when reading many a novel about doppelgängers, from such masters as Dostoyevsky and Nabokov, or when watching a certain kind of art film, especially from the ’60s heyday of Ingmar Bergman (Persona) and Roman Polanski (Repulsion). Enemy, the spooky new film from French-Canadian director Denis Villeneuve, blends the two media for a double-double whammy. Shot just before his psychological thriller Prisoners, and with Jake Gyllenhaal again as the star, Enemy is based on a novel, The Duplicate Human, by the Portuguese Nobel laureate José Saramago, and concerns a man who sees his exact double… in a movie.

Adam Bell (Jake Gyllenhaal), who teaches history in a Toronto college, seems detached from his work and his home life with his girlfriend Mary (Mélanie Laurent, the Nazi-killing Jewess in Quentin Tarantino’s Inglourious Basterds). A colleague suggests he watch a movie called Where There’s a Will There’s a Way. Adam does so with his usual dyspepsia until he spots, in a brief role, a man who could be his identical twin.

Curious, and creeped out, Adam discovers that the actor (also Gyllenhaal) is Daniel St. Claire, real name Anthony Claire, and calls his home. Anthony’s wife Helen (Sarah Gadon, from David Cronenberg’s A Dangerous Method and Cosmopolis) mistakes Adam for Anthony. Anyone would: the two men, when they meet, are identical, down to their body scars. Not even Mary and Helen could tell the difference — if, say, AB and AC should switch roles and bed down with the other’s mate. As one of them acknowledges to his woman, “I’m cheating on you, with me.”

“Chaos is order yet undeciphered,” reads the opening epigram, which must mean: undeciphered even after the movie ends. Enemy is full of clues pointing to further mysteries; the search for order in this film’s universe remains tantalizingly unfulfilled. Early in the film, in some smoky hideaway, nude women dance for the pleasure of clothed men who look as if they’re the ones being watched. Then a fat tarantula crawls across the floor, to be crushed under a woman’s high heel. (It’ll be back.)

Adam’s adventures in the doppelgänger trade don’t perk him up. He’s leading not a double life but two half-lives; he has a way but not the will. His reaction to nearly every stimulus or threat is to let out a long sigh. He expels breath so deeply and so often that by the end of the movie he must be as deflated as a helium balloon a week after the birthday party. The character lacks affect, and so does Enemy. The movie has a sleepwalker’s tempo, as if Adam’s story were his restless dream, but not a particularly illuminating one. Or maybe he’s paranoid. The glances of strangers, as they are seen through Adam’s eyes, have an accusatory edge. Even his fellow teacher, the one who recommended he watch the Anthony movie, acts suspiciously blasé. Trust no one, including yourself.

(READ: Back when Jake Gyllenhaal was the Next Big Thing)

The film’s aural and visual style conspire to underline Adam’s depression. The ends of his sentences sometimes echo, as if he’s in a huge warehouse for interrogation by some unknown Inquisition. Interiors are a blend of sooty pastels, like the Jamba Juice colors of Spike Jonze’s her gone rancid, and the exteriors — the high-rises and empty streets — cast a gray, penitentiary pall over Toronto. When a woman in bright red enters a hotel lobby, it jars the eye like a visual air-raid siren.

I hope I haven’t erred in making Enemy sound fascinating. It is not. It could be the blueprint of a really cool movie, or the memory of one. It shares a fault of the Villeneuve-Gyllenhaal Prisoners: that movie lasted 2½ hours, this one just 90 mins., but both are nearly an hour too long. They wade into grand metaphors and sink before they can swim. Like Fernando Meirelles’ Blindness (2008), another adaptation of a Saramago novel — in which virtually everyone goes blind, not into the dark but into an opaque light — Enemy is an arid parable, in which actors are neutered, zombified; they signify themes rather than occupying personalities.

Yes, the same could be said about some of the great ’60s art films: Alain Resnais’ Last Year at Marienbad, Michelangelo Antonioni’s La Notte and Eclipse, which the critic Pauline Kael called “the come-dressed-as-the-sick-soul-of-Europe parties.” But Resnais and Antonioni lent their wakes a artistic luxe and luster; the movies were excitements for the eye if not for the spirit. Villeneuve has the attitude for a modern sick-soul film; he just lacks the aptitude.

Far from the rarefied heights of Marienbad, Enemy is closer to hundreds of student movies made back then in the newly flourishing film schools. I know; I appeared in some of those amateur efforts, and the main directorial command was: Mope! “Walk around. Slower. Look up. Give me some apprehension. Don’t smile! We’re making art, for crissakes.”

(SEE: A gallery of pictures from the life and career of Alain Resnais)

Enemy’s star is a real, fine actor, not a budding movie critic, but his usual wit and winsomeness are lost in this fret festival. You get two Jakes but half a Gyllenhaal. The blond beguilers Laurent and Gadon go under too, as does Isabella Rossellini as Adam’s mom — the only on-screen figure with a pulse. These four paramedic performers can’t breathe coherent life into a movie that has high ambitions but ends up Strictly Film School. 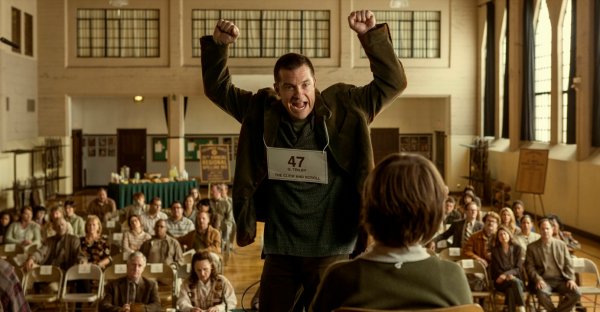 REVIEW: Jason Bateman Plays Against Type in <i>Bad Words</i>
Next Up: Editor's Pick