Rahul on Rahul: Indian Voters Get a Prime-Time Look at Congress' Main Man

It was the interview every political junkie in India has been waiting for. After ten years in elected office, political scion and Congress Party vice president Rahul Gandhi sat down for his first formal prime-time grilling, delivered by TimesNow’s editor-in-chief, Arnab Goswami. In the hour and twenty minutes that followed, Gandhi was at turns confident and worryingly vague, expressing some broad political goals like empowering women and opening the political system while coming up short on what, exactly, another term for Congress would look like as India gets ready to vote this spring.

Goswami did not spare his high-profile guest, and rightly so. Congress recently announced Gandhi would lead the party in its campaign ahead of national elections scheduled for May, but stopped short of naming him as a prime ministerial candidate, ending speculation over whether he would go head to head with opposition candidate Narendra Modi in the coming months. The move was interpreted by many as a play on Congress’ part to shield Gandhi, 43, from a potential trouncing by the opposition Bharatiya Janata Party (BJP) in May’s polls — or even worse, given the fates of his grandmother and father, both of whom were assassinated.

But the announcement still left India’s ruling party with a frontman who has not exactly been front and center. Though Gandhi’s public appearances have increased since Congress’ drubbing in key state polls last month, Indian voters have not had much of a chance to hear Gandhi riff on his ideas for the country or on the controversies facing the sitting government.

(MORE: Gandhi Scion Declines Chance to Be India’s Next Leader)

Last night, they did. In course of the long interview, certain things were clear. Gandhi’s sincerity on his pet issues like getting India’s youth involved in politics, for instance, came through. So did his conflicted attitude toward his own role in India’s dynastic political system and the expectations swirling around him, most obvious when he started referring to himself in the third person. When asked if he was avoiding a direct face-off with Modi, Gandhi gave this reply: “To understand that question you have to understand who Rahul Gandhi is and what Rahul Gandhi’s circumstances have been and if you delve into that you will get an answer to the question of what Rahul Gandhi is scared of what he is not scared of.” (The answer: “absolutely nothing,” he said.)

What also seems clear now is that anybody still waiting for a Modi-Gandhi showdown is likely to be disappointed. Gandhi skirted the question of whether he would debate Modi, and refused to take Goswami’s bait to directly attack the polarizing and popular candidate. “The BJP has a PM candidate, the BJP believes in concentration of power in the hands of one person,” he said. “I fundamentally disagree with that.” When asked about Modi’s involvement in Gujarat’s 2002 communal riots — which Prime Minister Manmohan Singh recently characterized as presiding over the “massacre of innocent citizens of the streets”— Gandhi said that Modi’s government was complicit in “abetting and pushing the riots further,” but offered no specifics. He also dodged giving an apology on behalf of Congress for lives lost during the 1984 anti-Sikh riots.

Goswami’s audience no doubt appreciated that he did not let Gandhi off the hook on these important issues and others, including the allegations of corruption that continue to dog the current government. But drilling down into a few specific topics so deeply did sort of suck the air out conversation, and left little room for voters to hear about what a third Congress led government would look like next year. A few moments contained more focused information, such as Gandhi saying he wanted to increasing manufacturing jobs and was open to further debate on whether political parties should be subject to India’s Right to Information (RTI) law. But as much as it was a window for Goswami to grill, it was a moment for Gandhi to use his generous airtime to directly communicate with voters. Showing up under the glare of the camera lights signals Gandhi may finally be embracing his new role at this crucial moment for his party. But to lead it to victory, he’s going to need more than 80 minutes. 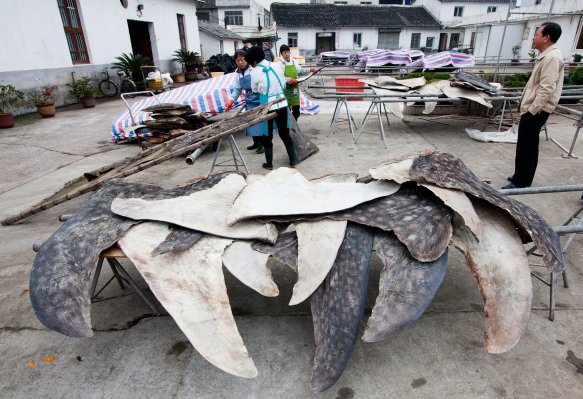 Exposed: The World's 'Biggest' Slaughter of an Endangered Species
Next Up: Editor's Pick