When it comes to pursuing justice for rape victims, sometimes life imitates art. That’s what happened Tuesday when Law & Order SVU star Mariska Hargitay co-hosted a press conference with Wayne County Prosecutor Kym Worthy to help push for continued testing of rape kit backlogs, on the same day that one of 100 serial rapists identified by backlogged kits was sentenced to 40-50 years in jail.

Worthy has made it her mission to test every single one of the 11,000 untested rape kits found in a warehouse in 2009, and Hargitay says helping clear the rape kit backlog is the number one priority of her organization, the Joyful Heart Foundation, the Detroit Free Press reports.

“To me, this is the clearest and most shocking demonstration of how we regard these crimes in our countries,” said the star, who plays sex crimes Detective Olivia Benson on the hit NBC drama. “One would assume that if someone endures a 4-6 hour invasive exam, that evidence would be handled with care and immediately tested.”

“Bottom line: rape kits can bring justice, and justice for so many survivors can bring healing,” she said. “Testing rape kits is vital to keeping rapists off the streets, and yet hundreds of thousands of these kits don’t even make it to the crime lab.”

Hargitay also said that testing rape kits was crucial to respecting the dignity of the survivors. “Testing rape kits sends a fundamental and crucial message to victims of sexual violence, and that message is: you matter. Not testing them sends the opposite message.”

The actress began to get teary when she announced a documentary project about the rape kit backlog, to be called Shelved.

Hargitay also said that a $35 million federal grant for rape kit testing was a direct result of Worthy’s tireless efforts to make sure rape victims get justice. Worthy’s team has already tested $1,600 of the backlogged kits, and brought almost 100 serial rapists to justice. Michigan recently approved $4 million in funding to test the remaining kits, which Worthy hopes will be done by the end of the year.

Check out their press conference here: 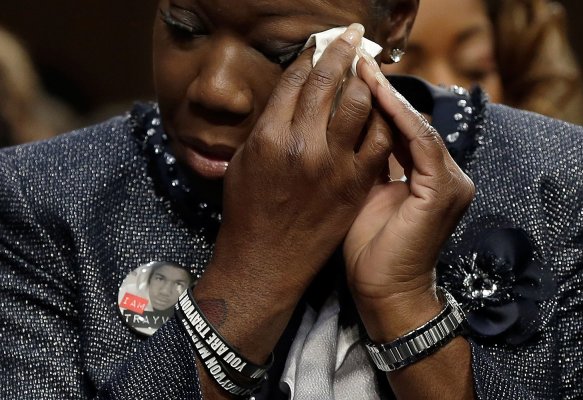 Mothers Team Up to Fight 'Stand Your Ground' Law
Next Up: Editor's Pick