Illustration by Leah Goren for TIME
By Jessica Bennett

Whatever your opinion of the campaign by Sheryl Sandberg’s Lean In foundation to ban the word bossy — which, for the record, I advised on — one thing is indisputable: the power of words is stark.

Call a little girl “bossy” and she starts to avoid leadership roles because she’s afraid of being seen as unlikeable. People are already wary of assertive women at work, but call a woman “aggressive” out loud and they will probably like her less. Call a female politician a ballbuster enough times, and people may actually be less likely to vote for her. Words tell us something about the way our culture perceives women in power, and whether we believe they’re supposed to be there.

So, in an attempt to save you — writers, speakers, humans, journalists — from falling into the gender bias trap unintentionally, we’ve put together this handy guide:

Seriously, don’t do it. And while you’re at it, don’t call them pushy, angry, brusque, ballbusters, bitchy, careerist, cold, calculating — you get the point. Also: shrill and strident, both of which imply high-pitched and screechy women a la your mother, finger pointed, scolding you to clean your room. Bossy is the subject of the new Sandberg campaign, but it’s something linguists have written about for decades. The reality is that these words are rooted in stereotype, and they are only applied to women. Think about it: girls are bossy, boys have “leadership qualities.” Women are deemed aggressive, while men are simply decisive (or just, um, bosses). From Ruth Bader Ginsburg (called “a bitch” by her law school classmates) to the “ball-busting” Hillary Clinton, historians will tell you: women in power have long been punished for exhibiting qualities of assertiveness, because it veers from the “feminine” mold. And yet, isn’t it precisely those assertive qualities that will help women get ahead? If you wouldn’t call a dude these words, don’t say ‘em of a lady.

Please Avoid the ‘Crazy Woman’ Trope. And While We’re At It: She’s Not ‘Moody,’ ‘Hysterical,’ or ‘Emotional’ Either.

Female hysteria was once the catch-all diagnosis for a woman with problems, and it didn’t disappear entirely from the Diagnostic and Statistical Manual of mental disorders until 1980. But the trope of the crazy, emotional, moody, hysterical, PMS-ing, crazy woman — or worse, the crazy, emotional, hysterical romantic stalker — remains in full force. Crazy is the catch-all putdown for any woman you don’t like/makes you uncomfortable/doesn’t fit the mold. (Or as Tina Fey said in her book Bossypants, “the definition of ‘crazy’ in show business is a woman who keeps talking even after no one wants to f*ck her any more.”) The problem with being a woman is that it’s impossible to avoid this label. So what even is crazy? A woman who expresses opinions? A woman who speaks too loud, or out of turn? Am I crazy if I yell? Am I crazy if I like a guy? Am I crazy if I act like a leader? Whatever it is, it usually doesn’t refer to any kind of real life mental illness. So keep the crazy label in check.

Women! Not Girls! Except in the Case of Girls. Or ladies. Wait, Damn…

Right, it’s a confusing place out there for what to call a grown female person. My girlfriends are “girls,” sometimes I mention having a conversation with a “chick,” there’s a resurgence of “lady,” sometimes I even call girls (oh wait I just did it) “babes.” But if you are a professional writer or journalist or interviewer or anybody else speaking publicly about women and not talking about the HBO series and not ruminating on the use of the word – or, you know, are addressing a woman on the air – please try to call us women. My mom would be super happy, thx.

‘Blond,’ ‘Perky,’ And Other Cutesy Descriptors.

What not to call women in power in print: Petite. Ladylike. Blond. Blue-eyed. Perky. Or perhaps having a “soft, girlie voice,” as was a recent description-of-choice by NPR’s Morning Edition, in a piece about Sen. Kirsten Gillibrand’s legislation to change the way the military views sexual assault. If these adjectives don’t tell us something a subject beyond identifying her as a woman, it’s safe to assume they are sexist filler. Journalists, this one’s for you: Come up with something better.

Avoid Describing the Sound of My Feminine Voice. Also, the Tone of It.

Women naturally have higher-pitched voices than men. Do we need to point it out? There’s no male equivalent of “shrill” or “screechy.” And I don’t believe there’s one for “nasal-car honk” tone either. And while we’re at it, let’s avoid descriptors like “whiny,” “nagging” or “complaining” to refer to women. Unless of course you’d use them to refer to a man too.

Leave Looks Out Of It.

That means Hillary Clinton’s cleavage, her cankles, her haircuts, pants suits, or the color of her blouse — all irrelevant to whether she’s going to make a good president! I also don’t need to know about Huma Abedin’s “rich, glowing hair,” Elena Kagan’s “drab D.C. clothes” or that Janet Yellin wore the same outfit twice (she’s the motherf–king head of the Fed). Here’s what the Washington Post’s internal stylebook says about references to personal appearance in print: that they “should generally be omitted unless clearly relevant to the story.” In case that wasn’t clear, a few specifics. TV hosts: Probably a bad idea to comment on how hot a woman is on air. Interviewers: Let’s avoid asking badass ladies in various fields about their looks, diets or favorite fashion designers. (And for more on this topic, check out Lindy West’s great piece over at Jezebel on how to write about female politicians.)

A Note On Shoes.

Unless they spark a full-on feminist shoe movement, shoes are not relevant.

Two Women Running Against Each Other, Or Disagreeing, or Remotely in the Same Competitive Industry, Does Not Equal a ‘Catfight.’

Why are female politicians in a race, or women in an office, or friends, or sisters, are described as catty or bitchy, constantly on the verge of a catfight, while men are seen as worthy rivals? Perhaps Urban Dictionary explains our media obsession with “catfights” best: “the male fantasy of two women ripping each other’s clothes off.” Recent media “catfights” include Diane Sawyer and Katie Couric. Michelle Bachmann and Sarah Palin. Marissa Mayer and Sheryl Sandberg. None of which were actual catfights, but managed to inject sexual undertones and generally devalue these women’s accomplishments. Research has shown that the “catfight” stereotype actually carries over into the workplace — giving women a bad reputation and leading to long-term implications.

Please Stop Asking If Women Can ‘Have It All.’

When in doubt, read this column, from the public editor of the New York Times, published last month amid outrage over a magazine cover titled, “Can Wendy Davis Have It All?” “Despite its well-intentioned efforts,” the Times ombudsman wrote, “this piece managed to trip over a double standard with its detailed examination of Ms. Davis’s biography, including her role in raising her two daughters.” And while we’re at it, let’s stop asking how women manage to “do it all.” Tina Fey declared this “the rudest question you can ask a woman.” Because the answer is simple. She’s doing it the same way a dude would, except that he doesn’t have to answer questions about it.

Female comedian, female director, female journalist… journalists covering “women’s issues” (why not just “issues”)? These modifiers are the linguistic version of a parenthetical or insignificant aside — which is exactly how late night comedy host Chelsea Handler was referred to in a recent article in the New York Times. In a rebuttal, Huffington Post, Handler declared: “I don’t want to be singled-out and lauded merely because I am successful ‘for a woman … The success of any woman should never be qualified by her gender.” When we can remove the “female” part of these phrases — because it is assumed that a female can, um, be these things — then our work here will be done.

On Husbands and Marital Status or Being a Mom.

We’re talking about pointing out that a woman is “unmarried” or even that she’s a “mother of two.” As Allyson Jule, the author of “A Beginner’s Guide to Language and Gender,” puts it: “These representations of women trivialize their lives and place an extra level of personal judgment on them.”

Finally, When In Doubt, Take the Quiz!

Consider it the Bechdel Test for language.

STEP ONE: Reverse the gender of the subject of the article/paper/sentence.

STEP THREE: If it does, see the tips above.

(And to get an idea of the incredibly sexist things some female pioneers have been called, check out ‘Bossy Women:’ 16 Leaders Who’ve Overcome That Label and Much, Much Worse.) 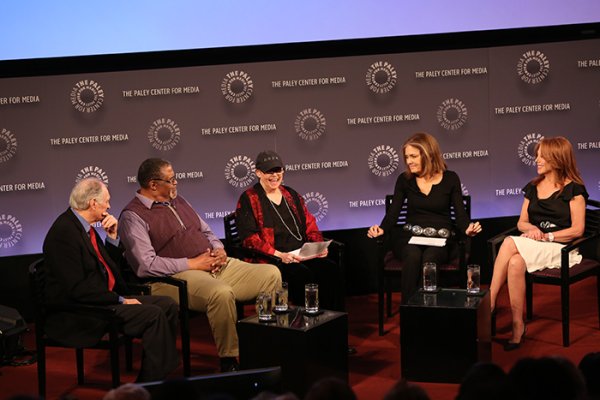 Free to Be... You and Me's 40th Birthday Bash
Next Up: Editor's Pick