This Is the Hottest Online Video Service You've Never Heard Of

How many gamers does it take to catch a Pokemon? 1.1 million, apparently. That’s how many people played the Game Boy classic Pokemon Red—together—on the video game streaming website Twitch.tv in February. As the game streamed online, people used a chat client to submit 122 million button inputs, often simultaneously, to control the movements of the main character as he pursued his quest of becoming a Pokemon master. It was an impractical but oddly hypnotic way to try to beat a video game. After two and a half weeks of wildly scrolling through menus, running in erratic circles, and occasionally defeating enemies, the gamers collectively toppled the Elite Four and saw the end credits roll. But the true victor of the endeavor was Twitch itself, which is quickly becoming one of the hottest entertainment properties on the Web.

Begun in 2011 as an offshoot of the live-streaming website Justin.tv, Twitch allows users to broadcast virtually any video game live online. Players can offer live color commentary or, as with Pokemon, let viewers help control the game through a chat window that runs next to the gameplay. The site now attracts 45 million unique viewers and 1 million broadcasters each month. In February it comprised 1.8 percent of total Internet traffic during peak hours, beating Hulu, Amazon and Facebook.

The idea that people would enjoy sitting back and watching video games, the most interactive of media formats, might seem counterintuitive. But Twitch CEO Emmett Shear says the halcyon days of gaming in the ‘80s and ‘90s were as much about watching as playing. “When you think about what it was like to play video games in the arcade, you put your quarter on the arcade machine and you waited your turn,” he says. “What did you do while you were waiting your turn? You watched the people who were up there playing.”

The popularity of arcades collapsed in the late ‘90s as people began playing competitively online instead of face-to-face. Communal gaming experiences became more rare. But as live streaming via the Interent became more common in the late 2000’s, gamers began using video sites to stream gameplay of PC titles. Shear, a cofounder of Justin.tv, watched an increasing number of StarCraft II streams popping up on the site saw the opportunity to spinoff this emerging usage into its own business. The company debuted Twitch.tv at the 2011 Electronic Entertainment Expo, the huge annual video game conference in Los Angeles.

In the ensuing two and a half years, Twitch has become the go-to source for live-streaming games. Players use it to watch and broadcast speedruns, a popular competitive format in which people complete games as quickly as possible. Matchups among professional gamers in competitive titles like League of Legends are regularly streamed on the service. And now, thanks to the Pokemon experiment, the emergent field of crowd-sourced gaming is becoming popular with other titles like Super Mario Bros. and Tetris.

In Twitch Plays Pokemon, users can input commands through a chat window to control the game's main character

Twitch may have finally figured out how to translate video games into lean-back entertainment, a goal that has eluded the television industry for years. Comcast launched the gaming-focused cable channel G4 in 2002, but it consistently suffered low ratings and cancelled the last of its programs related to video games in 2012. Shear says Twitch’s focus on actual gameplay instead of news and reviews gives it an edge over TV’s offerings. “G4 never actually had video games on it,” he says. “[Twitch] is the best players in the entire world showing off their skills at this game.”

The company won’t say whether its rapid growth has led to profits. Twitch sells both display ads and pre-roll video ads, as well as $4.99-per-month subscriptions for the most popular channels. The company splits the revenue from the ads and subscriptions evenly with broadcasters. Matthew DiPietro, vice president of marketing, says Twitch appeals to advertisers because it attracts millions of tech-savvy young males, a sought-after group that is sometimes hard to reach through traditional channels. “Gamers are a particularly savvy and particularly fickle bunch,” he says. “They tend to be cord cutters. They’re a very valuable demographic for brands but they’re also very hard to reach.” Brands such as Samsung, Unilever and Mountain Dew have advertised on Twitch, in addition to many video game companies.

Twitch is poised to grow even more in 2014 as it expands beyond its PC roots. The PlayStation 4 came equipped with the ability to live stream to Twitch’s website when it launched in November. Twenty percent of Twitch’s broadcasters now stream from the device. The Xbox One added the same functionality this week, just in time for the console’s first big exclusive, the Electronic Arts shooter Titanfall. With hardcore gamers in its pocket, the company is aiming for casual gamers next—last week the company released developer tools which could potentially let people live stream mobile games like Candy Crush Saga and Flappy Bird.

Now that Twitch has proven there’s a large appetite for live games, competitors are starting to swarm the sector. Ustream, a larger competitor that live-streams all kinds of content, can also broadcast from the PS4. YouTube, a hugely popular website for gaming footage, released developer tools last year to make live streaming games easier and recently broadened the number of people who can live stream content.

For now, though, Twitch is available on the most platforms to the widest audience. And it has a passionate user base—Twitch Plays Pokemon, the oddball experiment turned Internet phenomenon, wasn’t developed by Twitch staff but instead by a regular user of the site. “That’s actaully the most exciting thing to me about it,” Shear says. “We built a platform where it’s flexible enough and powerful enough that other people can come up with really cool new things that have never been seen before.” 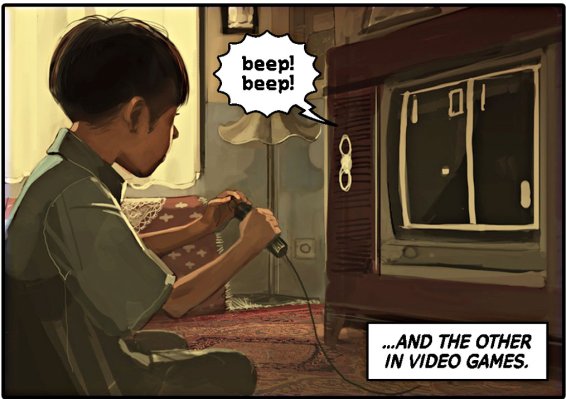 Tell (Real) Stories with Video Games
Next Up: Editor's Pick