President Barack Obama will announce Tuesday that he is acting unilaterally to raise the minimum wage for new federal contract workers, signaling ahead of his annual State of the Union address that he’ll work around congressional opposition wherever possible this year.

Obama will sign an executive order lifting the minimum wage only for workers under new federal contracts to $10.10 an hour, the White House said, up from the current federal minimum wage of $7.25 an hour. The order won’t apply to millions directly on the government payroll; that would require an act of Congress, which has been cool to raising the minimum wage since even before Obama made doing so a centerpiece of his State of the Union speech last year. The White House has repeatedly refused to take similar executive action to extend anti-discrimination provisions to LGBT employees of government contractors.

“A higher minimum wage for federal contract workers will provide good value for the federal government and hence good value for the taxpayer,” the administration said. “Boosting wages will lower turnover and increase morale, and will lead to higher productivity overall.Raising the minimum wage will make sure no family of four with a full-time worker has to raise their children in poverty.”

The executive order also signals the opening salvo in a midterm-election year fight in which Democrats are focusing on income inequality and pushing a minimum-wage increase for all workers, and in which Obama is promising a “year of action” using executive orders and other moves to work around Congress. Republicans have argued that raising the minimum wage will cause employers to cut back on hiring, ultimately hurting low-income workers. Recent polls have found that more than 60 percent of Americans favor raising the minimum wage. Republicans, who have mocked the idea of the White House’s “year of action,” reacted skeptically to Obama’s latest move.

“Well I suspect the president has the authority to raise the minimum wage for dealing with federal contracts,” House Speaker John Boehner said at a news conference Tuesday morning. “But let’s understand something. This affects not one current contract. It only affects future contracts with the federal government. And so I think the question is how many people, Mr. President, will this executive action actually help? I suspect the answer is somewhere close to zero.

“When it comes to the federal minimum wage, listen, I used to be an employer,” Boehner added. “When you raise the cost of something, you get less of it. And we know from increases in the minimum wage in the past that hundreds of thousands of low-income Americans have lost their jobs. And so the very people the president purports to help are the ones who are going to get hurt by this.”

The administration said that “raising the minimum wage will make sure no family of four with a full-time worker has to raise their children in poverty.”

-with reporting from Zeke J Miller and Alex Rogers 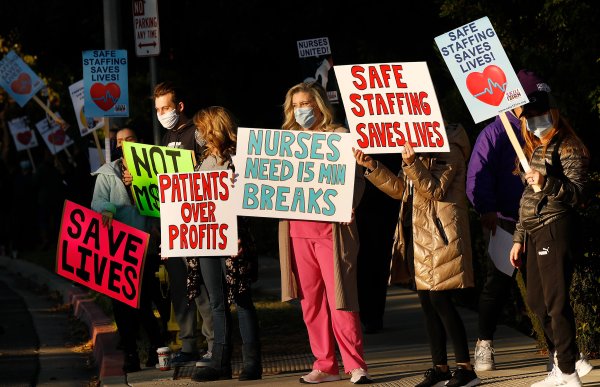 COVID-19 Has Fueled Workers' Advocacy
Next Up: Editor's Pick