The 'Cheapest' Country in the World

Vinny is in the middle of a whirlwind trip. He began in Caracas ten days ago, has already passed through New York, Chicago, Kansas City, Dallas, Indianapolis and Los Angeles and is about to board a flight from Miami to Milan and onto Madrid. The 28-year-old personal trainer will be there for around 36 hours before continuing his journey on to London, Johannesburg, Doha, Tokyo, Dallas, Lima and finally Caracas again in just over a week’s time. The entire trip — all 16 flights — cost him just $600.

“This is the holy grail,” Vinny says as he boards the flight to Milan. The journey will earn him some 100,000 air miles and help re-qualify him for American Airlines’ highest frequent-flier tier. When using money obtained on the black market, the cost of flights out of Venezuela can be up to ten times less than normal market prices. A return flight from Caracas to New York can effectively cost $150; to London, $300; and to Dubai, $500.

The reason: currency controls, brought in by Hugo Chávez in 2003, which severely limit the amount of foreign currency that Venezuelans are legally able to purchase from the government. Under the official exchange rate, one dollar buys 6.3 Bolívares, the local currency here named for Latin American independence hero Simón Bolívar. But the controls have created a black market on which greenbacks sell for more than 10 times as much. This week, authorities brought in a second exchange rate (essentially, a devaluation of just over 40 percent, though the government calls use of the d-word “enemy spin”) in an attempt to curb economic distortions. But economists are doubtful that the move will satiate the high demand for dollars.

The result is that, in socialist Venezuela, those with access to foreign currency can propel themselves into the one percent, flying around the world and living in five-star hotels, while locals earning in Bolívares battle one of the most expensive economies on the planet, struggling to find and afford basics such as cooking oil, chicken and toilet paper. Fed by inflation, the divide has grown rapidly in tandem with the expansion of the black market.

Those with dollars, or any hard currency, are able to take advantage of the thriving black market by buying local money either in shady street deals or in white-collar transactions with willing brokers by transferring their money between international bank accounts. “In this game, trust is the key,” says one illegal broker, sitting in an expensive Caracas hotel’s invite-only lounge. He says he earns several thousand dollars a month in fees and commissions, buying and selling “a couple of million” dollars every year. Clients will call him in order to obtain local money or to ask him to pay for flights and hotels directly in local currency, just as wealthy clients of invite-only charge cards, such as American Express’ famous Black Card, use its concierge service.

In stark contrast, the minimum wage here is equivalent to $519 a month at the official rate but around $50 at the black market rate. At Caracas’ airport, Linger Tiapa sells magazines and snacks. The 39-year-old earns $52 a month at the black market rate. “It’s madness,” she says. “The government has no idea how much we need to spend on food. I have to find other ways to make money — like selling my clothes.” A middle class professional may earn around four times Tiapa’s salary. These figures make Venezuela simultaneously one of the most expensive and one of the cheapest countries in the world: take-out noodles can cost $30 or $3 depending on whether you have access to the local currency or US dollars; a night at a five-star Marriott hotel costs $700 or $70. It is the same principle that allows Vinny, who has access to US dollars, to fly so cheaply.

Ricardo Cussano, who heads the Conseturismo tourism board here, estimates that 30% of airline seats are being taken up by foreigners. “People outside are buying a ticket into Venezuela and then when here, purchasing a ticket to their final destination using the black market,” he says. The currency controls are far from ideal for airlines. According to the International Air Transport Association (IATA), airlines are awaiting $3.3 billion which is locked up in local currency in Venezuela; the government, under pressure from airlines, has begun to exchange some of this for cash, fuel and bonds. IATA spokesman Jason Sinclair described the situation as “unacceptable and frankly unfair.” Owing to high demand, flights have become increasingly hard to come by in recent months.

Rafael Ramírez — head of Venezuela’s state oil company, Minister of Oil and Vice President of Economic Affairs — said this week that, in the future, airlines would begin to receive their money at the newly-announced second exchange rate, which could lower the differential between exchange rates that fuels Vinny’s cheap flights. The move will not affect the outstanding $3.3 billion. The new rate will be determined by weekly auctions and is expected to be initially around 11 Bolívares per dollar. The current official rate of 6.3 Bolívares to the dollar will be reserved only for state-run companies and certain vital sectors. “I’m not going to descend into a debate as to whether this is a devaluation or not,” said Ramírez.

With the news, the price of the dollar on the black market rose to 12.5 times the official rate, making common scams taking advantage of the differential between the exchange rates even more lucrative. Some business visitors here are paid expenses in US dollars at the official rate even though they obtain their local currency on the black market. One young European business consultant, who asked not to be named, was able to pay off his entire student loan after a month’s work in Venezuela. Those with foreign health insurance plans that pay out in foreign currency are able to make a more than ten-fold profit on claims. For example, a visit to the doctor can turn a profit of $115. This is because an appointment costs around 800 Bolívares, which is noted on the claim form. The insurance company then converts this at the official rate and pays out $127. But, if the patient had initially converted US dollars on the black market to pay for the appointment, the actual cost of the vist would have been around $13. Similarly, with such arbitrage, an MRI scan can net a profit of around $500. A week-long stay in the hospital can be even more lucrative, bringing in more than $10,000. This has turned a few foreigners here into hypochondriacs.

It is not only foreigners loaded with hard currency that can benefit. Locals can partake in an arbitrage process known as raspao, or the scrape: Venezuelans can claim a limited amount of foreign currency annually at the (now lower) official rate from the government. After jumping various bureaucratic hurdles, they are allocated the dollars on a credit card. The raspao involves flying out of Venezuela and essentially obtaining a cash advance on the money, bringing it back in and selling it on the black market. This “exchange rate magic,” says Angel Garcia Banchs, an economics professor at the Central University of Venezuela, “allows people to travel abroad for free.”

Alberto Ramos, a senior Latin America analyst at Goldman Sachs, is reminded of the Soviet Union. “Those that have the right connections and privileged access to hard currency at the official rate can do extremely well,” he says. Critics of the government say that it is the biggest beneficiary. In a stealth telephone recording leaked by critics here in May, a voice said to be of pro-government television presenter Mario Silva says that those in government are attempting to “steal as much as possible” before the Chávez regime “crumbles.”

Critics see the scams as inevitable and a result of tight controls. “A few opportunistic characters emerge and end up profiting from the disadvantaged position the general public is put into,” says Ramos. The idea behind the currency controls was to curb inflation and capital flight. Annual inflation at the end of 2013 stood at 56.2% and some $163 billion was deposited abroad in the third quarter of that year, according to Ramos.

As he lands “extremely tired and jetlagged” in Madrid, Vinny understands that his personal gain is at the expense of Venezuela as a whole. “It just so happens that I benefit with flights,” he says. “But,” he acknowledges, “the country continues to take a toll.” 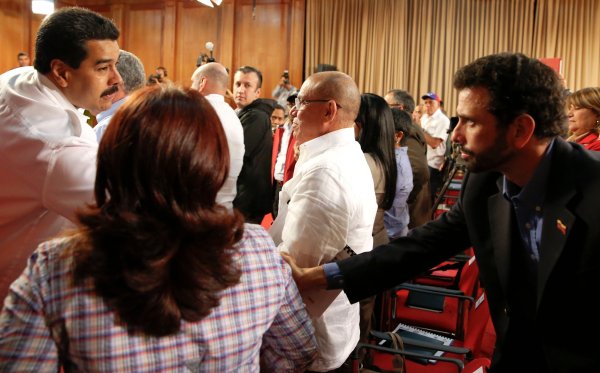