When Free to Be… You and Me aired on ABC 40 years ago, it was still common to refer to feminism as “women’s lib.” One of the many radical things about Marlo Thomas and friends’ book/album/TV special–then, and maybe to people rediscovering it today–is how thoroughly it believes that feminism is not just for women and girls. Boys and men should support equality not out of altruism but because there’s something in it for us: the freedom to be ourselves.

So when I first saw the special in my 1970s’ grade school, I heard it talking to me too. Being a boy didn’t mean you had to be one kind of boy. You could play baseball, or play with dolls, or like William in the song, with both. You could be a cop or a baker. You could be friends with boys or with girls. You could push a baby stroller and not be emasculated, because a man takes care of his kids. You could cry if you felt like it, not suck it in. New York Giant Rosey Grier said so (and, let us not forget, he did needlepoint too).

Maybe I shouldn’t be surprised that in 1974 those were the Free to Be messages primetime TV resisted most of all. At a 40th anniversary panel at New York’s Paley Center Tuesday night, Thomas said ABC executives wanted to cut “William’s Doll,” because “it would make every boy in America a sissy–and ‘sissy’ wasn’t the word they used.” They wanted to cut Grier’s iconic “It’s All Right to Cry”: same reason. And they didn’t want Thomas and Harry Belafonte’s duet “Parents Are People,” though not because Belafonte was pushing a baby carriage but because he was pushing it with Thomas, and “it looked like we were married.”

Seeing the panel, and watching the remastered Free to Be the Paley Center screened over the weekend, is a reminder of how much has changed and hasn’t over four decades. Americans generally accept the idea that women should be able to hold the same jobs as men. (Steinem referred to this as what non-feminists will call “The part I agree with” about feminism.) But they still get guilt-tripped when they become mothers, and they still don’t get paid equally. Men now want to be involved, hands-on dads, putting in quantity time and changing diapers (“as every good father / Should learn to do”). But they still don’t do an equal share of housework, and their bosses don’t feel they really need to see their kids as much as moms do. And as Letty Cottin Pogrebin, the Ms. editor who consulted on Free to Be, said at the panel, there’s now a vast choice of books that offer strong, equal role models for girls. (Thomas was inspired to make the project by an actual children’s book she found that said “Boys invent things / Girls use the things that boys invent.”) But kids’ toys today? Let me direct your attention to the pink Legos.

As for kids’ pop culture itself, the idea of boys and girls being friends and working as equal partners is built into the assumptions of Nick Jr, Disney, and PBS shows, and as Thomas said, you can see a little of feisty brunette princess / track star Atalanta in the strong-willed princesses of Brave and Frozen. But while it’s easy to look down on the homophobic, racist worries of the TV big-shots in 1974, could you imagine a broadcast network today airing a resolutely feminist kids’ show–developed by the freaking Ms. Foundation for Women— in primetime instead of The Bachelor?

So, yeah, the panel–Thomas, Grier, Alan Alda, producer Carole Hart, and Gloria Steinem, along with most of Free’s creative team–was nostalgic in a sweet way. Audience members brought copies of the original vinyl LP and mouthed along the words to the song clips–“When We Grow Up” with Michael Jackson and Roberta Flack, the sublimely ’70s “Sisters and Brothers” by the Voices of East Harlem.

But it was also a nostalgia for that post-’60s, Maude era when it felt like things could change completely and quickly–when little kids in my small-town Midwest school sat down in assemblies to watch feminist edutainment videos–only to see the actual change pan out as something much more complicated. Alda noted that he’s been writing a play about scientist Marie Curie, who was campaigned against for the Nobel Prize on the grounds that she was “ambitious.” Hillary Clinton has a shot at becoming president, but she still faces the same rap. The New York Times still memorializes women scientists with stories about their beef stroganoff. And male athletes are still treated as wusses if they complain about bullying.

The upside, if there is one, is that Free to Be is still relevant, and it’s still an awesome work of pop culture–playful, eccentric, good-hearted, and pulsing with optimism. I took my two sons to see it last weekend at the Paley Center. Some of it plays dated and slow now, in the context of the high-metabolism 2010s kid culture they’re used to. They don’t live in the gender-neutral afterworld envisioned by 1970s idealists; they have mostly male friends, who also have mostly male friends, none of whom I can ever recall picking up a doll.

On the other hand–and maybe this is my urban Brooklyn bubble talking–I’ve never heard them or any of their friends express the idea that boys aren’t supposed to cry. (Go to any kids’ chess tournament or soccer game and watch the waterworks.) And they loved “Ladies First”–in which a girly-girl’s insistence on always going first gets her eaten by tigers–and Mel Brooks voicing a newborn baby puppet who thinks he’s a girl and declares he wants to grow up to be “a cocktail waitress!”

As Thomas said, she made the show on the theory that “what is learned with laughter is learned well.” We’re still learning. But at least we’re also still laughing. 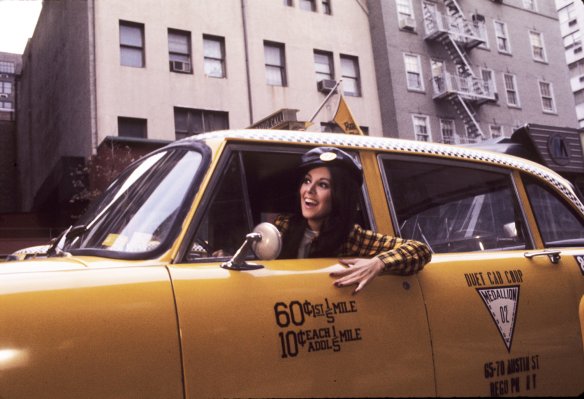 <i>Free to Be</i> 'Planted the Seeds of Gender Equality'
Next Up: Editor's Pick