A graphic from Tim Berners-Lee's 1989 proposal for what became the web, complete with blocky graphics and typo ("reefers" for "refers")
W3C
By Harry McCracken

On March 12, 1989, British computer scientist Tim Berners-Lee distributed a document to his colleagues at CERN, the European Organization for Nuclear Research, in Geneva. His unprepossessing title, “Information Management: A Proposal,” indicates that he wasn’t trying to change the world. He just knew that CERN had vast quantities of valuable information stored all over the place, and that it would be easier to find if it were all linked together in a way that made it accessible from any computer. So — returning to concepts he had started exploring in 1980 during an earlier tour of duty at CERN — he recommended creating a networked hypertext system to manage all that knowledge.

The idea floated out there for a while before it became reality, at CERN or anywhere else, but what Berners-Lee was proposing came to be known as the World Wide Web. That makes today, March 12, 2014, as good a day as any to celebrate the web’s 25th birthday.

Several other early dates in web history matter as much as this one does. On November 12, 1990, for instance, Berners-Lee and a colleague, Robert Cailliau, returned to the idea from the 1989 document with a meatier proposal that coined the name “WorldWideWeb.” By December 25, they had the WorldWideWeb software up and running at CERN in its most basic form. On August 6, 1991, people outside of CERN got access to the web as a public Internet service for the first time.

Even then, the web was a text-only service that didn’t bear that much resemblance to the one that became a phenomenon a few years later. Marc Andreessen and Eric Bina’s NCSA Mosaic, announced on January 23, 1993, made the web fully graphical; once that happened, it started to catch on, fast.

Still, a quarter-century’s worth of perspective helps make clear how remarkable Berners-Lee’s 1989 proposal was. He set out only to solve one pressing problem at one research institution; it wasn’t a work of scientific prophecy along the lines of Vannevar Bush’s “As We May Think,” the seminal 1945 Atlantic Monthly article that described the “memex,” a futuristic data-retrieval machine that sounds a lot like a PC connected to the Internet. But in outlining what CERN needed in an information-sharing system, Berners-Lee was both practical and prescient. He described an idea that has scaled up ever since, as very few 1980s technologies have done. (And fortunately for us, he continues to play a key role in shaping his creation’s future, as he did this week by calling for an online bill of rights.)

Here are some of the things that made “Information Management: A Proposal” so powerful:

Berners-Lee borrowed existing ideas. Rather than trying to convince anyone at CERN to support anything too radical, he recommended bringing together technologies and concepts his colleagues already knew and understood. For instance, as he mentions in his document, the concept of hypertext already existed; it had been named years before by Ted Nelson, whose wildly-ambitious-but-unfinished-even-in-2014 Project Xanadu presaged many aspects of the web. And the proposal’s opening infographic references Bill Atkinson’s brilliant Mac software HyperCard, whose “stacks” were akin to rudimentary websites that could be distributed on floppy disks.

He was realistic. Xanadu was supposed to implement super-sophisticated features such as intelligent links that would auto-adjust themselves if a document moved, and built-in accounting for royalties so that authors could make money off their hypertext creations. Berners-Lee, who was eager to propose something that one or two people could put together in a year or less, slashed out every detail that wasn’t absolutely necessary.

He made decentralization fundamental. “Most systems available today use a single database,” Berners-Lee wrote. They stored a lot of stuff, all in one place. He proposed something entirely different: a way to link up disparate documents and databases, no matter where they resided.

He aimed for universal compatibility. Though Berners-Lee coded the original WorldWideWeb software on a computer from NeXT — the company Steve Jobs started after being forced out of Apple in 1985 — he wanted the web to be available everywhere, on every sort of computer used at CERN, including Macs and VAX minicomputers.

He wanted to make sharing simple. It’s tempting now to think of the web as something that didn’t become social until this century, with the arrival of services such as Facebook, YouTube and Twitter. But from the start, Berners-Lee proposed a tool for painless, democratized collaboration among CERN’s staff of “several thousand people, many of them very creative, all working toward common goals.”

He looked forward. Berners-Lee said that all CERN needed at moment was a tool capable of distributing text documents formatted for a screen with 24 rows of 80 characters apiece. But he said graphics were a possible future area of expansion, and even mentioned speech and video — forms of media that barely existed in digital form in 1989.

He knew that everybody would eventually need something like the system he was proposing. “CERN meets now some problems which the rest of the world will have to face soon,” Berners-Lee wrote. “In 10 years, there may be many commercial solutions to the problems above, while today we need something to allow us to continue.”

I find that bit deeply touching: Berners-Lee looked at his proposal as a stopgap that might be supplanted by multiple systems designed by companies out to make a buck. Instead, well before the ten-year timeframe he mentions was up, it was obvious that proprietary services — such as AOL and CompuServe — would give way to the network Berners-Lee first conceptualized in 1989, and gave to the world rather than turning into a money-making enterprise.

It’s not hard to envision an era in which Facebook, the iPhone or Google search has been displaced by a newer, shinier upstart, just as they did to MySpace, the BlackBerry and AltaVista, respectively. But the web feels permanent. It’s already taken us places Berners-Lee couldn’t have predicted 25 years ago, and in one form or another, it’s going to make life better for future generations in ways that are unimaginable right now. 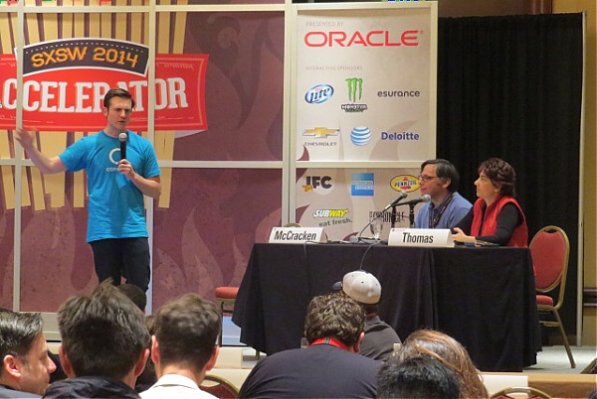 6 Things I Judged and Liked at This Year's SXSW Accelerator
Next Up: Editor's Pick