Former Republican lobbyist David Jolly will be laughing all the way to Washington after winning a special election on Tuesday to fill the congressional seat long occupied by Republican Representative Bill Young, his former boss who died in October.

Jolly’s victory ends one of the most expensive special elections in history: political parties and outside groups spent $9 million trying to win the evenly split district, which voted for President Obama in 2012, 50% to 49%. The victory gives Republicans at large momentum going into midterm elections to be held later this year.

But the race took on an added dimension as Democrats and Republicans alike labeled it a referendum on the President’s health care overhaul — and, apparently, Obamacare is really that unpopular.

“Democrats are in grave, grave danger. Tonight, [House minority leader] Nancy Pelosi’s most prized candidate in the entire country was brought down because of Obamacare, President Obama and the Democrats total mishandling of our economy,” said Daniel Scarpinato, a spokesman for the National Republican Congressional Committee, which works to elect Republicans to the House. “If a challenger with a $1.5 million cash advantage can’t win in a district President Obama won twice, where can Democrats win?”

Pelosi, though, said she still believes Sink’s message will prove true for Democrats in November. Sink was a test case for the Democrats’ 2014 women’s economic platform as the party seeks to turn out more female voters who trend Democratic. She also road tested their Obamacare messaging — Sink’s line at its core was “I support the Affordable Care Act but I also support major fixes.”

“From the beginning of this race, Democrats knew this would be an uphill battle — in a district represented by a Republican for the last 58 years, in a race where Republicans’ outside allies poured millions into a steady barrage of false attacks,” Pelosi said in a statement. “Though she came up short at the ballot box today, there is no doubt that Alex’s message and passion will continue to serve the best interests of her community.”

After Jolly’s victory, Democrats need to win 17 seats in November to take back the House. Jolly will have to run again this fall to win a full term. No word yet on whether Sink will seek a rematch.

An earlier version of this article misstated the ratio by which Sink outraised Jolly. It is 3 to 1, not 4 to 1. 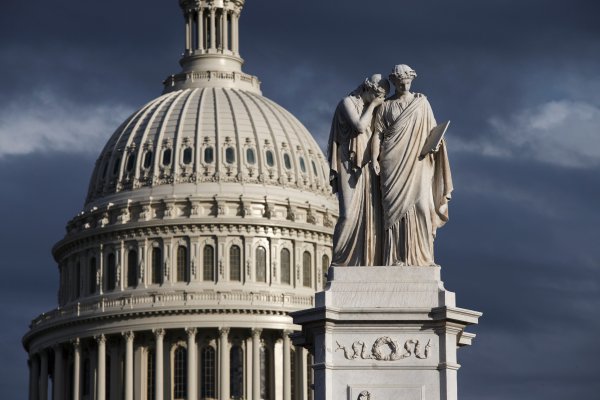 Money Can't Buy You Love, But It Can Buy Lawmakers
Next Up: Editor's Pick