When the Wilson family arrived in Colorado a few days ago, they already had a two-month supply of medicine for their two-year-old daughter Vivian. Brian and Meghan Wilson, along with their older daughter, have just joined a growing population of “medical refugees,” those who have uprooted their lives elsewhere so they can get medical marijuana in a state where it is abundant and legal—even though there is little science assuring them that marijuana could be the cure for conditions like Vivian’s severe epilepsy.

The Wilsons, originally from New Jersey, are the focus of Dr. Sanjay Gupta’s second documentary on medical marijuana, Weed 2: Cannabis Madness. He says the film is not “pro-marijuana.” But it would be easy to think otherwise after watching CNN’s hour-long program that debuted on March 11. “It’s the politics of pot, pitting policy against patients,” Gupta says in a voiceover at the outset of the show, a follow-up to a program on the same topic that ran last year. “Trapped in the middle: sick, qualified people who want medical marijuana but can’t get it.”

Gupta calls marijuana a plant “that can work wonders” and presents the plight of families who are using the drug to help ailing children to make his larger case: that legal restrictions on the drug are keeping needy patients from potentially lifesaving medicine. (CNN and Time Inc. are both owned by Time Warner.)

The Wilsons have been in the spotlight since having a high-profile dustup with Governor Chris Christie, when Brian demanded that he address medical marijuana laws in New Jersey at a diner drop-by. Vivian has a resistance to traditional medications, and after battling for months in their home state to get a strain said to help stop seizures, they eventually moved west. Meghan says that when they arrived in late February, Vivian was worse for a few days, banging her head and seeming dehydrated. She improved for a few days and now seems to be back to her old self, despite being administered doses of a promising strain called Charlotte’s Web. “It’s been a bit of a roller coaster so far,” Meghan tells TIME.

For Gupta, the “cannabis madness” is that the Wilsons and other families have to go to such great lengths to try the drug. For other experts, the madness is that the federal government has made researching the beneficial effects of marijuana so difficult, leaving doctors with a dearth of results on which to base medical opinions. “I don’t want to fall into the trap that doctors and patients have fallen into throughout all of medical history,” epilepsy expert Dr. Orrin Devinsky tells TIME. “People use treatments that seem like they work, and it’s very clear to everybody that they work, until someone finally does a randomized controlled trial. So many things that have received tremendous popular attention … just don’t have beneficial effects, and in some cases their harms clearly outweigh their benefits.”

Devinsky, who has treated Vivian, says that he certainly hopes marijuana will prove as beneficial as many believe. But he cautions that there is little literature on its use in treating epilepsy beyond old studies and trials using non-human animals. A big reason for that is that the federal government still lists marijuana as a Schedule I drug, which classifies it as highly addictive and having no redeeming medical value. And that makes getting approval to study its benefits both necessary and difficult. Those advocating to reform marijuana laws believe that the drug should be classified at a lower level, if not declassified completely.

One reason Gupta’s documentary is airing now, however, is that the federal government appears to be giving medical marijuana research a yellow light, just as it has gently eased its approach to the drug with banking and law enforcement. Devinsky is part of the first study of cannabis’ effects on epilepsy that has been approved by the Food and Drug Administration. He and a handful of U.S. doctors will be administering a drug called Epidiolex to young patients. Epidiolex is an extract that has extremely low levels of THC—the substance in marijuana that gets users high—and high levels of a substance called cannabidiol, known as CBD. (As does Charlotte’s Web, the strain Vivian is using.) Devinsky spent six months working with the FDA, the Drug Enforcement Agency and other federal departments before getting approval to begin the study this year, even though Epidiolex can’t get anyone high.

Dr. Bonni Goldstein, a pediatrician who now works as the medical director for a company that evaluates patients for medical marijuana recommendations in California, believes the hesitancy to allow studies is rooted in the misguided belief in “old propaganda” about the dangers of the drug. (She also consults for Ghost Group, a venture capital firm focused on the legal weed industry.) Goldstein is full of stories about what a dramatic difference she has seen in patients who have tried medical marijuana, how it has changed lives and given hope to young people who thought there was no medicine to deal with their pain. “It’s really sad that the medical community does not want to embrace it,” she says. “You cannot help but notice, you’re hearing the same results over and over again.”

Goldstein believes more doctors would herald the powers of marijuana if they had the same education she’s gotten through first-hand experience. Patients, she says, are often left in the dark nowadays too, trusting that they’re getting what is advertised at dispensaries—that a strain has a true ratio of CBD to THC, say—in an industry that is largely unregulated on those fronts. In Weed 2, the Wilsons desperately attempt to turn marijuana leaves into an oil they can administer to their child and admit that they really don’t know exactly what they’re giving her. Now that they’re in Colorado, and getting the advice of doctors, Meghan says they’re really still experimenting. “Generally speaking, people using marijuana, especially parents treating their kids with it, we’re kind of paving our own road,” she says.

Gupta and Devinsky, who wrote an op-ed on his doubts about medical marijuana for the New York Times, don’t always see eye to eye. “The science is pretty clear,” Gupta tells TIME, noting that his confidence comes partly from evidence about how the human system generally reacts to marijuana rather than experiments where it is used to treat specific ailments. “We don’t know the long-term effects … but this is why we want to study it.” He notes that the medicines currently on the market for treating conditions like epilepsy have unknown and potentially serious side effects, too. Though he was once on the other side of the debate, Gupta now says medical marijuana should be legalized on a federal level.

Devinsky says that as Vivian’s doctor, he neither advised the family to use medical marijuana, nor cautioned against it. And he understands why they chose to move to Colorado when nothing else seemed to work. “Do we have proof it works? Absolutely not. Do we have proof it’s safe? Absolutely not,” he says. “If it was my daughter and I lived in Colorado, and she had failed to respond to all the existing medications, there’s a good chance I would try it.”

Meghan says that despite seeing mixed results so far, she still has faith that the family made the right choice. “There’s a lot of fine-tuning, and we have to be very patient,” she says. “We’re in this for the long haul.” 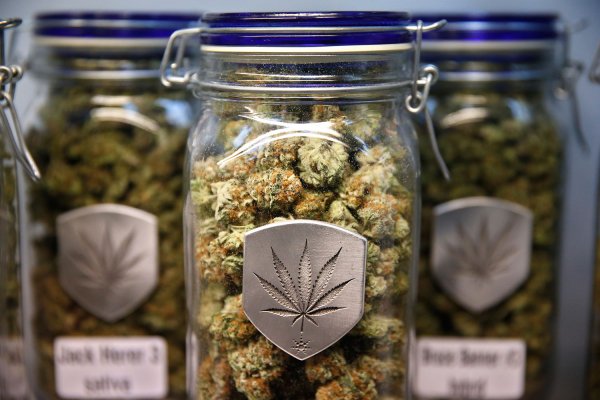 Pot Growers Are Snatching Up Warehouse Space in Denver
Next Up: Editor's Pick