The (Not Very) Quiet Campaign for Hillary Clinton

Far from being just another aide to Hillary and Bill Clinton, Craig Smith is something of an adopted son. He worked for the pair in Arkansas, was the very first hire for Bill’s 1992 presidential run, followed them to the White House and then advised both the 1996 and 2008 campaigns. But in recent months, Smith and his mentors haven’t been talking. “Look, I’ve known these people for over 30 years,” he says. “Being in a situation where I can’t talk to them is a little odd. But, you know, it is what it is.”

The reason for the distance is Smith’s current role as a senior adviser for Ready for Hillary, a super PAC that has been set up to organize the grassroots for a 2016 Clinton presidential effort should she run. Super PACs cannot under federal rules coordinate certain types of spending or fundraising with candidates. Smith has interpreted this broadly, cutting off all direct ties to the former First Couple. “Our goal is to build the Ferrari of grassroots operations,” Smith says. “All we need is a driver ready to hit the gas.”

It’s not wholly as hands-off as all that; the back-and-forth is just carefully choreographed. In recent weeks, Clinton has told friends she is grateful for the Ready for Hillary effort, follows its activities closely and believes it is building exactly the kind of foundation she never erected — but discovered she needed — in her race against Barack Obama in 2008. The ­super PAC, meanwhile, has been telegraphing messages to Clinton in plain sight. When people without obvious ties to the Clintons are hired for the group, they are often announced in press releases containing testimonials from someone in the Clintons’ orbit — a move intended to ensure that Hillary will be comfortable with the choice.

As far as Smith is concerned, all systems are go: in the next few months, the group plans to sign up supporters in every state. Should Clinton personally offer endorsements in midterm contests — and it would be unusual if she did not — Ready for Hillary plans to rush in with fundraising assistance and foot soldiers. In other races, Clinton fans will be urged to promote Democrats up and down the ballot, fostering goodwill and, just as important, gaining practical experience that can be reprised later if Clinton jumps in.

There is now talk among Ready officials about finishing 2014 with 5 million supporters and 2 million active volunteers, numbers that would likely dwarf the assets of all the GOP wannabes combined. If realized, that would be substantially more than the piddling grassroots effort that Clinton mounted against Obama six years ago. Could anyone, Democrat or Republican, catch the Clinton machine this time? “I don’t know,” Smith says. “I think it takes a long time to build a grassroots operation. These things don’t pop up overnight.”

Indeed, they do not, and there is little that is spontaneous about this one. Smith estimates that the entire Clinton effort — including all the current super PAC ­projects and an actual campaign — will cost a cool $1.7 billion in total. That back-of-the-envelope calculation is based on his observation that in each presidential campaign the victor ends up spending about 150% of what the winner spent four years before.

The other boost for Ready for Hillary has come from Obama’s political machine. Inside Obama world, the battle scars of the 2008 nomination fight have faded, and there is widespread excitement about a Clinton candidacy; her service in the Administration has made her the clear, if unofficial, legatee. “I have yet to meet anybody — grassroots, donor or elected official — who is not enthusiastically for her,” says one of Obama’s top strategists. “The loyalty thing has played a huge role in the difference between support and enthusiastic support.”

Obama’s advisers have had to reassure the President that the early embrace of Clinton by his far-flung team is a good thing. He has fretted to aides about the leadership role his campaign manager Jim Messina has taken on in another pro-Clinton super PAC, Priorities USA Action, and worried that the early organizing might distract from his effort to limit losses in the looming midterm election. Obama is also aware that the rush to Clinton could diminish his Vice President’s standing and hurt some feelings, whether Joe Biden runs or not.

Meanwhile, the current First Lady maintains a steadfast eye on her husband’s legacy — short term and long — say advisers who have discussed politics with her recently. Michelle Obama is determined that the party choose the strongest contender possible to keep the White House in Democratic hands after her husband departs, and aides say she has her ear close to the ground. Of course, no one expects a public endorsement anytime soon. But like practically everyone else around the President, Michelle has made it clear she believes Clinton looks like the best choice now. 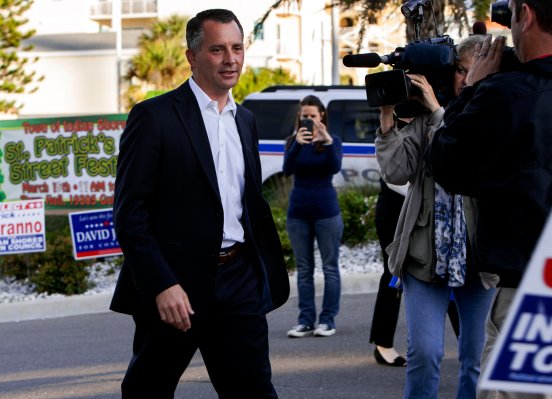 Jolly Wins Election, Laughs All the Way to Congress
Next Up: Editor's Pick