Brennan Calls CIA Hacking Charges "Beyond The Scope of Reason"

Central Intelligence Agency director John Brennan fought back Tuesday against serious accusations made by the Senate Intelligence Committee chairwoman, who alleged on the chamber floor earlier in the day that the agency may have violated federal and constitutional law in searching computers used by the committee.

Dianne Feinstein’s rare public rebuke of the agency—she said she came to the Senate floor “reluctantly”—came just hours before Brennan was scheduled to speak at an open press event at the Council of Foreign Relations. It is the latest in a growing fight over an unpublished report by her committee based on a multi-year review of millions of internal CIA documents regarding the agency’s now-defunct programs of rendition, detention, and interrogation, which critics say crossed the line into torture.

“Nothing could be further from the truth,” Brennan said of the illegal monitoring claim made by Feinstein. “We wouldn’t do that. That’s just beyond the scope of reason.”

“We are not in any way, shape, or form trying to thwart this report’s progression or release,” he added. “Far more than other institutions of government, the CIA wants to put the rendition, detention, and interrogation chapter of its history behind it.”

At issue is the “Panetta Review”—named after Leon E. Panetta, the former C.I.A. director, who ordered the agency to review its documents to better help it understand the volume of material it gave to the committee in 2009. The “Panetta Review” memos are reportedly critical of interrogation methods like waterboarding, which are described as providing little intelligence, according to the New York Times. After the committee raised questions about the Panetta Review with the CIA, Feinstein alleged, the agency surreptitiously searched the computers Senate staffers were using for the review to determine how the staffers had obtained copies of the Panetta documents.

Feinstein said that the committee staff did not hack the CIA computers for the memos, as had been reported, but that they were identified using the search tool provided by the CIA to find the documents, and that they “have no way to determine” who made the internal documents available. On the Senate floor, Feinstein said that 6.2 million pages were provided without any organizational structure—“a true document dump.”

Brennan said that the agency is a “far better organization” due to congressional oversight, but said that he “absolutely” disagrees with “some important points” in the committee’s report. “It’s up to them to decide if they want to put it out publicly or not,” he said. “I’m not going to stand in the way, however, I will protect sources and methods in terms of the tremendous investment the country has made” in order to keep the country safe, he added.

It would be unusual if any charges were brought against anyone at the CIA, and it remains unclear whether Feinstein’s allegations are true. Feinstein said Tuesday that she spoke publicly only after receiving neither the apology nor recognition from the CIA that the search of the staffers’ computers was “inappropriate.” In response to a question by NBC’s Andrea Mitchell, who moderated the CFR event, Brennan said he would not resign should the allegations prove true.

“I am confident that the authorities will review this appropriately,” said Brennan. “I would just encourage members of the Senate to take their time to make sure that they don’t overstate what they claim and what they probably believe to be the truth.”

“If I did something wrong, I will go to the President and explain to him exactly what I did and what the findings were,” he added. “He is the one who can ask me to stay or to go.” 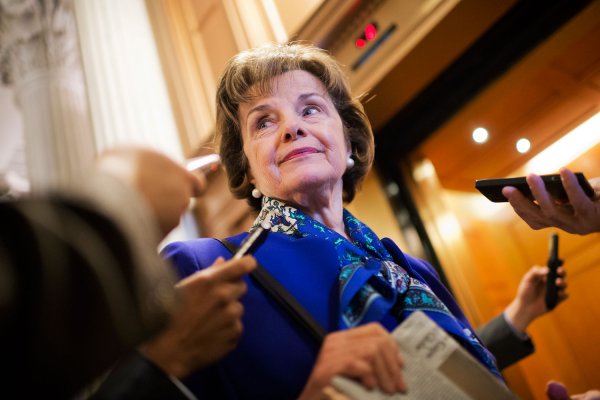 Senator: CIA Spied on Us
Next Up: Editor's Pick