Companies Advertise To Prove They Are Mom Enough

General Electric’s latest big ad is a whimsical take on the company’s projects, as narrated by an awe-filled child: “My mom makes airplane engines that can talk,” she says as planes fly by on feathered wings. “My mom makes trains that are friends with trees,” she tells us as that train plows through an enchanted landscape. “My mom,” she proudly states, “works at GE.”

The pitch: GE makes great products that are good for your family and exciting for the world. But more subtly: it’s a place that employs great women who inspire little girls. Not so long ago, the same ad probably would have shown us a little boy bragging about his dad’s job.

And that, on GE’s part, is intentional.

“We felt like, wow, we have a really interesting opportunity to kind of take a bit of an unexpected approach to the ad,” says GE’s global marketing director Linda Boff. “Instead of taking a little girl talking about her dad, we thought it would be accurate and refreshing to see her talking about her mom.”

Boff says GE has joined industry-wide efforts to promote women working in science and technology. Women engineers in the workforce increased from 185,000 in 2003 to 232,000 in 2011 according to the National Science Foundation. The number of women in engineering technology and IT roles at the professional and executive levels has increased by 20 percent over the past three years, Boff says.

The company has seen positive internal reactions to the ad, and plans to continue its run throughout the year, targeting “high-impact” moments like the Olympics. They’ve also made plans to show the ad in movie theaters this spring and have translated the spot into 17 languages and dialects for international runs.

The ad marks a marketing shift in attitudes toward working moms. Unlike the “Thank You, Mom” Procter & Gamble ads that also ran frequently on NBC this Olympic season, in which mothers scoop up tots falling in the snow who eventually grow into winter athletes, the mom in the GE ad is not shown in a nurturing role. In fact, she’s not shown at all—we only see the wonder she inspires in her daughter.

This absence is a move from more typical ads that express working moms’ anxiety about distance from their children. Take a recent Angie’s List commercial, which begins with a trope that’s been around as long as women have been in the workforce: “As a working mom of two young boys, life could be hectic,” says “Dawn R., member since 2010.” Luckily there’s Angie’s List to save her money and family time.

“The bar of creativity is just too low,” says Katherine Wintsch, founder and CEO of consulting firm The Mom Complex. A working mom in a TV ad will more often than not have “a power suit on and a briefcase, and she’s running out the door like a harried mess—it’s just very cliché,” Wintsch says.

Getty Images recently teamed up with Sheryl Sandberg’s Lean In foundation to push back against these clichés, replacing stagey, tired stock photography with warmer images depicting scenes like “Mother with baby in lap working on laptop at home”: she’s tattooed, the room looks like a real living space, and neither character looks frazzled or upset. It’s a far cry from the usual clip-art-like pictures of moms looking panicked as they juggle Blackberries and sandwiches. Topping a story with these photos may not scream “feminism,” but it does improve how women are seen throughout the media.

GE is not alone in latching onto the current trendiness of soft-core feminism—brands like CoverGirl and GoldieBlox have recently put out well-received, empowering spots. But unlike GE, those brands’ products are specifically for girls and women, so their logic is clear.

GE’s motivations are a bit more complicated. What does the company stand to gain by showcasing working mothers—and why involve daughters?

In large part, it’s a reflection of the changing workforce.

“Just in the past year or so,” says Kelley Skoloda, a partner at the marketing firm Ketchum, “you’ve heard a lot about how the economic recession has hit men more than women, and women are becoming breadwinners. I think women working and earning as much as or more than their male counterparts is clearly here to stay, and marketers are starting to see that.”

Tech companies like GE strive to show that what they make benefits families. Just think of Apple’s “Misunderstood” ad, in which a wallflower of a boy seems to ignore his family on his iPhone throughout the holiday, until he reveals he’s been taping them all along for a sweetly nostalgic home video. Technology has received a bad rap for pulling families apart, so Skoloda says it benefits tech companies to show ways in which it can pull them together, as it seems to in GE’s ad.

The companies show empathy, Wintsch says, in the hopes that the empathy will earn moms’ loyalty.

The same strategy is at play in a current ad by Firestone, aptly titled “Working Mom”: a mother packs her toolbox, chainsaw and ax into the bed of her pickup truck at dawn, then tenderly rouses her kids from sleep and carries them to the back seat. “For some people,” the narrator tells us as she drives off, “it doesn’t matter who works on their car. But for some, it couldn’t matter more.”

The Second Sex these ads are not. But they do mark a departure from tired motherly tropes. The working moms they show have more on their mind than frozen dinners and easy cleaning products. It’s a testament to our post-recession, Leaning-In society that feminism has rounded the bend—revolutionary to enterprising. 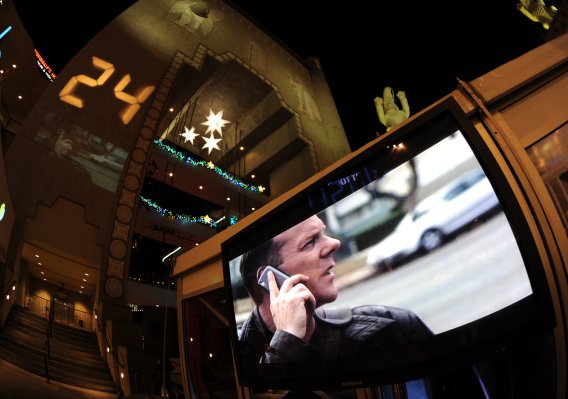 24 Is About to Become the Most Valuable Show on TV
Next Up: Editor's Pick