Watch This Drone Taser a Guy Until He Collapses

For the wary, carrying a taser (which is legal in 45 states) is the ultimate insurance against would-be attackers. What’s even better than a taser? Having your own taser drone floating behind you at all times (illegal in all 50 states).

At South By Southwest, the design firm Chaotic Moon launched the inappropriately named CUPID, which stands for “chaotic unmanned personal intercept drone.” It’s a six-rotor machine that’s capable of delivering 80,000 volts via a stun gun shot on a barbed-wire dart that sticks to a human target.

When Chaotic Moon intern Jackson Sheehan gets hit by the dart, he immediately falls to his knees, though his vital signs turn out just fine. The project is meant to “raise awareness of what [drones] can do technically,” according to Whurley, a co-founder of the company. “There’s a lot this can do in the public space, but also the personal safety space.”

After watching the video, it’s clear that drones are very effective at defense, but the project is also a reminder that the country has yet to regulate private use of drones. So unless you want to be chased down like a deer during hunting season, we should probably get on that. 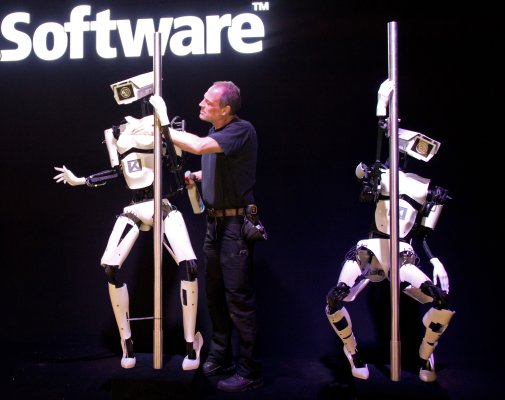 Give Humanity the Ability to Invent Robots and We'll Make Those Robots Pole Dance
Next Up: Editor's Pick