Hundred Years of Dry: How California's Drought Could Get Much, Much Worse

California is the driest it has been on record, but its geologic history indicates the drought could get far worse
David McNew / Getty Images
By Bryan Walsh

As he gave his State of the State speech yesterday, California Gov. Jerry Brown had reason to feel pretty good. The 75-year-old governor has helped rescue the state from fiscal insolvency and presided over the addition of 1 million new jobs since 2010. But as he spoke, Brown hit a darker note. Last week, amid the driest year for the state since record-keeping began in the 1840s, Brown declared a drought emergency for California, and in his speech he warned of harder times ahead:

Californians need to be ready, because if some scientists are right, this drought could be worse than anything the state has experienced in centuries. B. Lynn Ingram, a paleoclimatologist at the University of California, Berkeley, has looked at rings of old trees in the state, which helps scientists gauge precipitation levels going back hundreds of years. (Wide tree rings indicate years of substantial growth and therefore healthy rainfall, while narrow rings indicate years of little growth and very dry weather.) She believes that California hasn’t been this dry since 1580, around the time the English privateer Sir Francis Drake first visited the state’s coast:

Ingram is referring to paleoclimatic evidence that California, and much of the American Southwest, has a history of mega-droughts that could last for decades and even centuries. Scientists like Richard Seager of Columbia University’s Lamont-Dohery Earth Observatory have used tree-ring data to show that the Plains and the Southwest experienced multi-decadal droughts between 800 A.D. and 1500 A.D. Today dead tree stumps—carbon-dated to the Medieval period—can be seen in river valley bottoms in the Sierra Nevada mountains, and underwater in places like California’s Mono Lake, signs that these bodies of water were once completely dry. Other researchers have looked at the remains of bison bones found in archaeological sites, and have deduced that a millennium ago, the bison were far less numerous than they were several centuries later, when they blanketed the Plains—another sign of how arid the West once was. The indigenous Anasazi people of the Southwest built great cliff cities that can still be seen in places like Mesa Verde—yet their civilization collapsed, quite possibly because they couldn’t endure the mega-droughts.

(MORE: How the Drought of 2012 Will Make Your Food More Expensive)

In fact, those droughts lasted so long that it might be better to say that the Medieval West had a different climate than it has had during most of American history, one that was fundamentally more arid. And there’s no reason to assume that drought as we know it is the aberration. Ingram notes that the late 1930s to early 1950s—a time when much of the great water infrastructure of the West was built, including the Hoover Dam—may turn out to have been unusually wet and mild on a geologic time scale:

These mega-droughts aren’t predictions. They’re history, albeit from a time well before California was the land of Hollywood and Silicon Valley. And the thought that California and the rest of the modern West might have developed during what could turn out to be an unusually wet period is sobering. In 1930, a year before construction began on the Hoover Dam, just 5.6 million people lived in California. Today more than 38.2 million live in the largest state in the U.S., all of whom need water. California’s 80,500 farms and ranches produced crops and livestock worth $44.7 billion in 2012, but dry farming districts like the Central and Imperial Valleys would wither without irrigation. (Altogether, agriculture uses around 80% of the stare’s developed water supply.) More people and more crops have their straws in California’s water supply. Even in normal years, the state would be in trouble. If we see a return to the bone-dry climate of the Medieval period, it’s hard to see how the state could survive as it is now. And that’s not even taking the effects of climate change into account—the most recent Intergovernmental Panel on Climate Change (IPCC) report found that it was likely that warming would lead to even drier conditions in the American Southwest.

In his speech, Brown told Californians “it is imperative that we do everything possible to mitigate the effects of the drought.” The good news is that the sheer amount of water we waste—in farms, in industry, even in our homes—means there’s plenty of room for conservation. The bad news is that if California lives up to its climatological history, there may not be much water left to conserve. 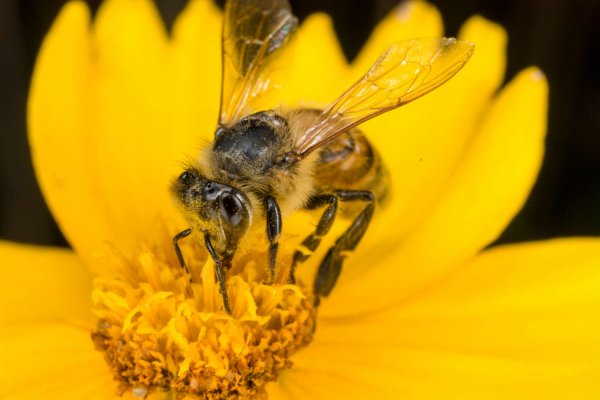 How a Plant Virus May Help Cause the Beepocalypse
Next Up: Editor's Pick