Members of Grandmothers Against Removals protesting against the overrepresentation of indigenous children in the child-protection system on the steps of the parliament house of New South Wales in Sydney on Feb. 13, 2014
Ian Lloyd Neubauer
By Ian Lloyd Neubauer / Sydney

In 2008, then Australian Prime Minister Kevin Rudd made history when he issued a formal apology to the “stolen generations” — Aboriginal and Torres Strait Island children forcefully removed from their families for placement in institutions and homes where they were put to work as laborers, farmhands and servants.

“The injustices of the past must never, never happen again,” Rudd said of the 19th century policy born out of the eugenics-based view that blacks were morally inferior and couldn’t properly care for their offspring. Once removed, children could be brought up “white” and assimilated into broad society so that in time there would be no more indigenous people left in Australia.

On that account, it failed. However, by the time forced removals were stamped out in the 1970s, the policy had extinguished the kinship connections, land titles, language, customs, spirituality and identity of an estimated 50,000 Aborigines and islanders. Trapped between two cultures but fitting into neither, members of the stolen generations suffer poorer health, worse housing, shorter life spans, higher unemployment and higher incarceration rates than other indigenous Australians.

But now, child-protection systems that err on the side of caution, coupled with the legacies of the stolen generations, are allegedly replicating the cruel dynamics of Australia’s colonial past. The situation is far from clear-cut, however, and many of those involved in child protection — both nonindigenous and indigenous staff — strenuously deny any such heavy-handedness exists today. Nevertheless, in the state of New South Wales (NSW) nearly 6,300, or 10% of indigenous children, are wards of the state. In comparison, only 1.6% of nonindigenous children in NSW live in out-of-home care.

“I cried on the day of the apology because my grandmother, who was taken to a Catholic mission when she was 5, didn’t get to hear it and because my grandson was taken that same year,” says Mary, an Aboriginal woman from the central coast of NSW, whose real name cannot be revealed because of laws banning the identification of wards of state. Adds her daughter: “They said sorry to Aboriginals for the stolen generations, but they are still doing it today.”

The court order authorizing the removal of the boy cited lack of hygiene, the threat of domestic violence, based on the father’s protracted criminal record, and neglect. Defined by the NSW Department of Family and Community Services (FaCS) as a failure to provide things needed for proper growth — a nutritious diet, dental care and supervision — accusations of neglect are present in 40% of indigenous-child removals, whereas sexual abuse and physical abuse are present in only 5% and 10% of cases respectively.

“Depending on the degree, neglect certainly is a cause for removal as it impacts on a child’s ability to attend school, to make friends, their health and general well-being,” says Raeleen McKenzie, a psychologist working in child protection in the state of Victoria for more than 25 years. “In NSW there have been several cases in the past where children who needed intervention weren’t removed and died. So when a child is severely at risk, something has to be done.”

Yet critics argue FaCS assessments of neglect are often made on spurious grounds that fail to take Aboriginal culture into consideration. “The classic example is the way Aboriginal children are raised not just by a nuclear family but collectively by grandparents, uncles and neighbors,” says Paddy Gibson, senior researcher at the University of Technology, Sydney. “Just because Aboriginal kids are on the streets at night doesn’t mean they aren’t being watched.”

Gibson says a lot of FaCS decisions are opinions based on hearsay or the assumption of neglect. “And once those decisions are made,” he adds, “FaCS is under no obligation to prove it in court because the standards of evidence that apply in criminal court do not apply in children’s court.” A severe lack of resources for families trying to get their children returned only compounds the issue. “Either they don’t have a lawyer or they get a public defender who doesn’t have time to properly prepare their case,” says Gibson.

Frank Hytten, CEO of the Secretariat of National Aboriginal and Islander Child Care, says the “decision to remove indigenous children is often made in the context of beliefs rather than facts.” Officials stick fast to rules rather than applying them in the context of the needs of particular children, he adds, citing, “an ideological context where the general population still believes they’re lazy bastards who don’t deserve any better.” The bottom line is “colonization is still having an effect on Aboriginals and disintegrating their families,” says Hytten.

There are also widespread allegations that FaCS is removing indigenous children without first explicitly warning parents that loss of custody is imminent unless conditions improved — allegations that contradict the department’s own charter and regulations.

Mary says her grandson was removed “without warning” and “out of the blue” six years previously by a group of 15 to 20 policemen. Earlier this month, a member of the stolen generations from northern NSW contacted TIME claiming a tactical-response squad raided his home at night and removed all eight of his grandchildren using excess force after his youngest grandchild succumbed to sudden infant death syndrome. “To see all of this reoccur, it really breaks your heart,” he said. Detective inspector Gavin Rattenbury confirms police assisted FaCS caseworkers removing the eight children, but denies excess force was employed.

“If children are removed without waning, you have to assume we found very alarming abuse that might actually endanger the life of a child,” Pru Goward, the NSW minister for family and community services, tells TIME. Of course, “It’s a terrible trauma for a parent to lose a child, even they have been neglectful,” she adds.

According to Wal Browne, a solicitor from Walgett in northwest NSW who works closely with the local Aboriginal community, speaking about a new stolen generation is an exaggeration. “Three or four years ago some pretty horrendous things happened. But the FaCS office here in Walgett have changed their processes a lot,” he says. “They’re not nearly as likely to disrupt families as they were before. I have also heard some good stories from [the town of] Mudgee where FaCS have been very easy to deal with, very switched on and handled some very difficult cases.”

Sally King, an indigenous FaCS caseworker based in Kempsey on the Mid North Coast region of NSW, is better placed than most to judge current trends. “My father was part of the stolen generation, and my grandmother’s brothers were taken away,” she says, “simply because they were Aboriginal.” Today, by contrast, she says her organization aims to protect children no matter their color, race or religion. “We as frontline staff are doing this by engaging families, putting in support services and doing everything we can to ensure families remain together,” adds King. “When that’s not possible, we take action to keep their children safe from harm.”

Goward agrees there are too many indigenous children being removed in the state, but “that does not mean we are wrongly removing children; there are people who say we do not remove enough Aboriginal children,” she says. “It means the conditions in which many Aboriginal families live are unacceptable,” referring to the tin shanties on the outskirts of towns like Lightning Ridge and Wilcannia. There, Aborigines live in Third World conditions without electricity or sanitation — hotbeds for alcoholism, petrol sniffing, depression and domestic violence.

“We don’t remove children lightly. We only remove them when they are living in homes where there is extreme violence, where there is drug and alcohol abuse,” says Goward, who is also the NSW minister for women. “If someone is drunk or stoned, what do you think are the chances of them getting up in the morning, washing their children, feeding them and getting them to school? I met a little boy in Wilcannia who could not form sentences — not because he had suffered a cognitive loss, but because no one had ever spoken to him in sentences. All he had ever heard was abuse and shouting.”

Goward highlights that in the three years preceding her center-right Liberal-National coalition win at the polls in 2011, the number of indigenous children in out-of-home care in NSW increased by an average of 495 annually. But in Goward’s first year in office, only 217 indigenous children were removed — half of whom have been placed in either kinship care or with other indigenous families. “We have the highest rate of conformance to Aboriginal placement principles in Australia,” she says. “That tells you we are trying very hard to make sure Aboriginal children stay in touch with their country, their background, their culture and history.”

Crucially, Australia has failed to alleviate the grinding poverty that is the root cause of the indigenous overrepresentation in child protection — not just in NSW but across every single state and territory in the country. Prime Minister Tony Abbott admitted that much while delivering this year’s Closing the Gap report on indigenous disadvantage to Parliament on Feb. 12. “We are not on track to achieve the more important and the more meaningful targets,” he said, pointing to statistics that show little to no improvements in indigenous health, education and unemployment.

To its credit, the current NSW government has made significant progress in reining in FaCS heavy-handedness. But that comes as small solace to successive generations of First Australians robbed of the company of their children. “My son needs to be with me,” says Mary’s daughter, who is now raising a healthy and happy 1-year-old girl and hopes her firstborn will be returned soon. “I am his mom. Only I know how to give him the love that he needs.” 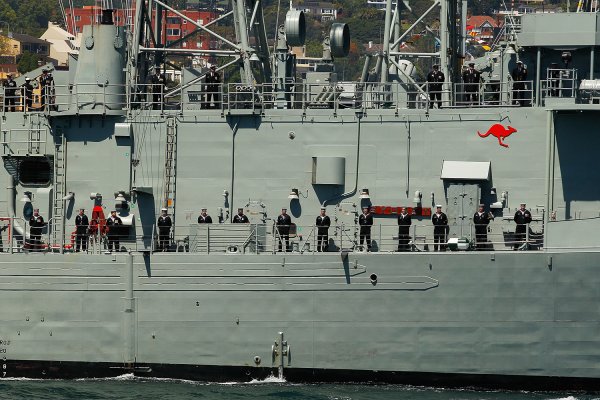