'Free to Be' Boys and Girls: 40 Years After the Failed Gender Revolution

This week marks the 40th anniversary of an event close to the hearts of gender activists everywhere. On March 11, 1974, ABC aired Marlo Thomas’ “Free to Be…You and Me” — a musical program celebrating gender-free children. Thomas and her fellow co-neutralists envisioned a world where the sex distinction would melt away. Instead of “males” and “females,” there would be mutually respectful, non-gendered human persons. The project resulted in a platinum LP, a best-selling book, and an Emmy. More than that, the idea of gender liberation entered the national zeitgeist. Parents everywhere began giving their daughters trucks and sons baby dolls. Like so many dream boats floating on the utopian sea, this one crashed and sank when it hit the rocks of reality.

In one “Free to Be” song, two babies discuss their life goals: the female wants to be a fireman; the male, a cocktail waitress. Another tells about a girl who liked to say, “Ladies First” — only to wind up being the first to be eaten by tigers. The songs drive home the idea that we are all androgynous beings unfairly constrained by social stereotypes. “William‘s Doll” is memorable. “A doll, said William, is what I need. To wash and clean and dress and feed.” In the end his kindly grandmother buys him the coveted toy.

A few months ago, I found myself in a place William would adore: the American Girl doll palace in New York City. But nearly all the children there were girls. “They know what girls love,” said a transfixed seven-year-old girl attached to my hand. We were standing in front of a doll salon, where you could make appointments for your doll to have her hair and nails done. The hundreds of little girls in that store showed a purposefulness and sense of well-being I had not witnessed since the summer before, when I visited the Baseball Hall of Fame in Cooperstown, New York. Only in Cooperstown it was little boys who were enthralled. Hundreds of them filled the shops where they carefully examined and evaluated an unfathomable number of little cards with photos and data about baseball heroes. Yes, I realize there are boys who would enjoy the American Girl doll store and girls whose dearest hope is to visit Baseball Town — but those are the exceptions. I am talking about the rule. And as a rule, the young Williams of this world do not want a doll.

“Don’t Dress Your Cat in an Apron,” another jaunty “Free to Be” song, tell us: “A person should do what he likes to. A person’s a person that way.” Well, OK, maybe sometimes. But, after 40 years of gender activism, boys and girls show few signs of liking to do the same things. From the earliest age, boys show a distinct preference for active outdoor play, with a strong predilection for games with body contact, conflict, and clearly defined winners and losers. Girls, too, enjoy raucous outdoor play, but they engage in it less. Girls, as a rule, are more drawn to imaginative theatrical games — playing house, playing school — as well as exchanging confidences with a best friend. Boys playing kickball together in the schoolyard are not only having a great deal of fun, they are forging friendships with other males in ways that are critical to their healthy socialization. Similarly, little girls who spend hours in deep conversation with other girls or playing theatrical games are happily and actively honing their social skills. What these children are doing is not only fun but developmentally sound.

The year 1974 was a long time ago. It was the Age of Aquarius, and Marlo Thomas and her friends can be forgiven for thinking gender neutrality to be a workable and desirable plan. But in a recent interview, Thomas, now 76, said she found nothing dated about “Free to Be.” Children, she said, “need to hear that … boys and girls are pretty much the same except for something in their underwear.” Except that they are not.

In 2009, David Geary, a University of Missouri psychologist, published the second edition of Male, Female: The Evolution of Human Sex Differences. This thorough, fair-minded, and comprehensive survey of the literature includes more than 50 pages of footnotes citing studies by neuroscientists, endocrinologists, geneticists, anthropologists, and psychologists showing a strong biological basis for many gender differences. And, as Geary recently told me, “One of the largest and most persistent differences between the sexes is children’s play preferences.” The female preference for nurturing play and the male propensity for rough-and-tumble hold cross-culturally and even cross-species. Researchers have found, for example, that female vervet monkeys play with dolls much more than their brothers, who prefer balls and toy cars. Nor can human reality be tossed aside. In all known societies, women tend to be the nurturers and men the warriors. Harvard psychologist Steven Pinker points to the absurdity of ascribing these universal differences to socialization: “It would be an amazing coincidence that in every society the coin flip that assigns each sex to one set of roles would land the same way.”

Of course, we can soften and shape these roles, and that has been, in every epoch, the work of civilization. But civilization won’t work against the grain of human nature, and our futile attempts to make it do so can only damage the children that are the subjects of the experiment. Though few would deny that parents and teachers should expose children to a wide range of toys and play activities, almost any parent will attest that most little girls don’t want to play with dump trucks and few boys show an interest in Hello Kitty tea sets. “Free to Be” purports to be an anthem to freedom; but to “liberate” children from their gender will require unrelenting adult policing, monitoring, correcting, and shaming. Enlightened opinion tells us not to do that with gender non-conforming children; but surely it is just as misguided to do it with kids who conform to the conventions of their sex.

The writer Andrew Sullivan is right when he describes the sex difference as “so obvious no one really doubted it until very recently, when the blank-slate left emerged, merging self-righteousness with empirical delusion.” That delusion was jumpstarted in 1974 with the advent of “Free To Be… You and Me.” Today, an army of gender scholars and activists is marching in support of the genderless ideal. But these warriors forget that ignoring differences between boys and girls can be just as damaging as creating differences where none exist. “Free to Be” is a cautionary example of how an idealistic social fantasy can turn into a blueprint for repression.

Christina Hoff Sommers is a resident scholar at the American Enterprise Institute. She is the author of several books, including The War Against Boys. Follow her @CHsommers. 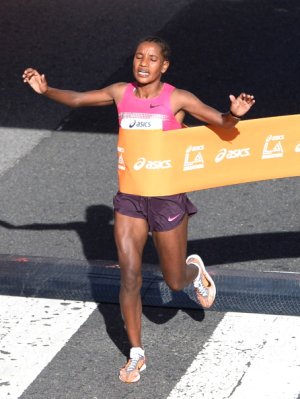 Woman Bests Men In an L.A. Marathon With One Caveat
Next Up: Editor's Pick