“I am making it known that I have put an end to my shared life with Valerie Trierweiler,” Hollande told Agence France-Presse.

Hollande’s office had earlier denied the claims of his separation from Trierweiler, the BBC reports. However, he never denied his affair with Gayet, which was publicized after the French gossip magazine Closer published photos of Hollande arriving at her apartment for nocturnal trysts. 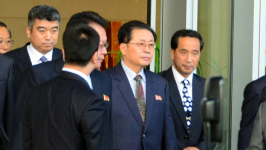