Billy Graham, considered by many the father of modern Christian evangelism, has died at the age of 99. Graham preached in 185 countries throughout the course of his storied six-decade career, reaching millions of people across the globe and earning the nickname “America’s Pastor.”

Below, you can watch five of Graham’s greatest sermons, from the spiritual revival that made him a household name to the last address he ever gave, on his 95th birthday in 2013.

The spiritual revival that launched Billy Graham into global fame was his 1949 Los Angeles crusade. More than 350,000 people attended over the course of the two-month long revival, held in a giant tent downtown known as the Canvas Cathedral. Graham was just 30 years old.

In 1952, Graham held a revival in Washington, D.C., on the steps of the Capitol Building. Vice President Alben Barkley helped to arrange the event, but President Harry Truman refused to come. During this meeting, Graham asked Congress to create a national day of prayer, and that’s how the annual tradition began.

Graham’s 1957 Greater New York Crusade drew more than two million people. The preacher sold out Madison Square Garden nearly every night from May to September, and more than 100,000 people attended the final night in Times Square. Martin Luther King Jr. joined him to lead the people in prayer.

Graham’s largest crusade was the Seoul, South Korea revival of 1973, held on the airstrip at Yoi-do Plaza. More than 3.2 million people attended over five days starting in late May, and an estimated 75,000 pledged themselves to follow Jesus Christ.

Graham gave his last message to America on his 95th birthday, in November 2013. In a message aired in thousands of churches, Graham said the United States is in great need of a spiritual awakening. “There have been times that I’ve wept as I’ve gone from city to city and I’ve seen how far people have wandered from God,” he said. 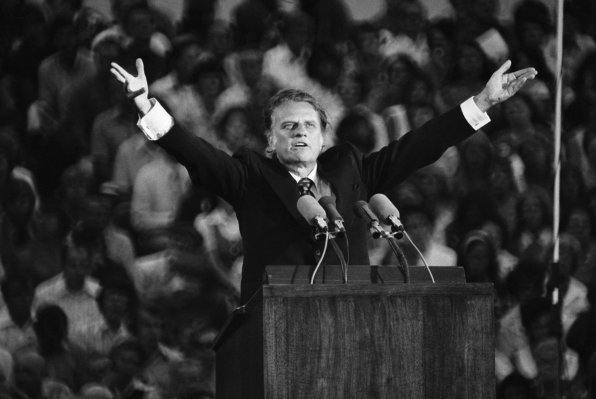 Billy Graham, Father of Modern Evangelism, Dies at 99
Next Up: Editor's Pick