NSA whistleblower Edward Snowden speaks via videoconference at the "Virtual Conversation With Edward Snowden" during the 2014 SXSW Music, Film + Interactive Festival at the Austin Convention Center on March 10, 2014 in Austin.
Michael Buckner—Getty Images for SXSW
By Denver Nicks

Former NSA contractor Edward Snowden said Monday that the United States government is “setting fire to the future of the Internet” with its massive domestic surveillance programs.

“When we think about what’s happened with the NSA in the last decade, the result has been an adversarial Internet, a global free fire zone,” Snowden, whose leaks last year sparked debate about surveillance, told the South by Southwest Interactive tech conference via video link from Russia, where he’s living under temporary asylum. “Nothing we ever asked for. Something we don’t want. Something we need to protect against.”

Snowden was joined by his American Civil Liberties Union attorney Ben Wizner and the ACLU’s chief technologist Christopher Soghoian for a conversation on digital privacy issues, a major theme of this year’s conference. WikiLeaks founder Julian Assange drew substantial crowds for his own address via video link on Saturday.

For much of Monday’s talk, Snowden hammered home an argument he and his supporters have been making since his leaks first pulled the curtain back on the NSA a year ago: that mass surveillance makes the Internet a more dangerous place. By systematically working to crack and weaken online security systems in order to harvest user data for surveillance, Snowden said NSA in effect undermines the trust and security upon which a well-functioning Internet depend.

“They’re setting fire to the future of the Internet,” Snowden said, addressing the tech savvy audience. “And the people that are in this room now—you guys are the firefighters.”

During an audience Q&A segment, the first question asked of Snowden came from Tim Berners-Lee, the computer scientist credited as the creator of the World Wide Web. Berners-Lee, who has been a vocal supporter of Snowden’s, asked what changes the leaker thought should be made to prevent abuse of government surveillance capacities.

“We’ve got a good starting point and that’s what we have to remember. We have an oversight model that could work,” Snowden said, stressing that the people ultimately tasked with overseeing the intelligence community—Congress—must be held to account. “We need a watchdog that watches Congress,” he said.

The decision to invite Snowden to speak at SXSW drew criticism from some quarters. Kansas Republican Rep. Mike Pompeo wrote to festival organizers asking them to cancel the event. Pompeo derided Snowden as a man “whose only apparent qualification is his willingness to steal from his own government and then flee to that beacon of First Amendment freedoms, the Russia of Vladimir Putin.” 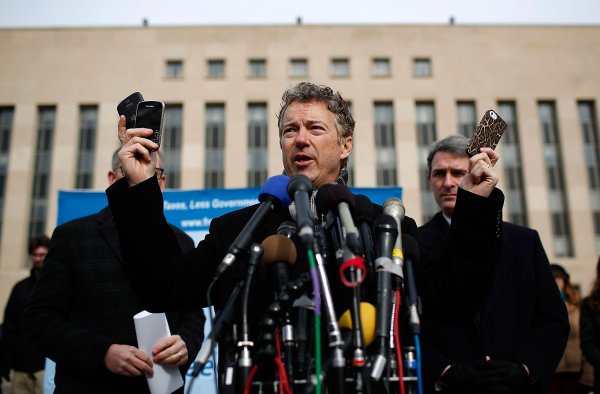