Angela Merkel and Vladimir Putin have more in common than most world leaders. They speak frequently, especially since the Ukraine crisis began to unfold. In an age of cookie-cutter politics, their brands stand out. They wield influence. They have staying power. They are astonishingly popular with broad swaths of their electorates. They literally speak each other’s languages. As a schoolgirl in East Germany, the future Chancellor twice won the Communist state’s top prize for Russian. As a KGB spy stationed in Dresden, the future Russian President learned to speak a fluent and earthy German.

They also understand how to push each other’s buttons. After one of their first meetings, in 2002, Merkel laconically told her aides she had survived the “KGB test,” meeting Putin’s icy gaze without flinching. At their bilateral meeting in Sochi in 2007, Putin allowed his black Labrador Koni to rest her head on Merkel’s knee, aware that the otherwise unflappable Merkel is frightened of dogs. And both premiers know, viscerally, what Soviet power meant.

The difference between them—and this gulf may be wider than any that separates their fellow world leaders—is that Merkel remembers that power, and its toxic manifestation through the repressive state apparatus of East Germany, with revulsion. Putin, once an instrument of Soviet power, regrets its passing.

Some voices in the West argue that Putin is misunderstood: his goal is not to build an empire but simply to secure Russian national interests. Merkel, by contrast, believes Putin aims to recreate something of the past that shaped both leaders. Her reluctance to wield hefty sanctions against Russia in defense of the Ukraine’s territorial integrity has therefore harvested criticism that Germany places its commercial interests before its duties as a world citizen.

Germany does depend on Russia for about a third of its oil and gas needs; it avidly exports its goods and services to Russia; German business chiefs are lobbying against any response to the current situation that might hurt their bottom lines. But the reality is that until Russian troops rolled into Crimea, Merkel’s two aspirations, of containing Russian ambitions and fostering German prosperity, appeared compatible and interlinked. “Part of the strategy towards Russia over the last years was to get closer, to create some degree of interaction, and that has economic consequences, so the cost of any break in the relationship increases,” says Daniela Schwarzer, the Berlin-based Europe program director of the German Marshall Fund of the United States.

Trade was only one element in this soft-power strategy. Germany has tried to bind Russia closer through diplomacy, and sees the Group of Eight leading industrialized countries not only as an important forum for discussion and decision-making but also as a mechanism for keeping Russia onside. As the West scrambled to formulate a response to Russia’s incursion into Crimea, Germany’s Foreign Minister Frank-Walter Steinmeier opposed a U.S. proposal to exclude Russia from the G8, but German officials privately believe that battle is already lost. Merkel herself believes the G8 cannot survive the crisis, according to one government source.

Publicly the rhetoric in Germany is hardening too. On March 9, Steinmeier gave an interview to the German broadcaster ZDF threatening Moscow with tough sanctions. Much though strategists still believe in keeping lines open between Germany and Russia, between Merkel and Putin, they also fear the consequences of schisms within Europe and between Europe and the U.S. And those calls between the German Chancellor and the Russian President are becoming chillier by the day. During their most recent conversation, on Sunday, Merkel told Putin the planned Crimea referendum on March 16 offends against Ukrainian and international law. Her spokesman Steffen Seibert said she “regretted, that no progress had yet been made on setting up an international contact group to find the political path to a solution of the Ukraine conflict. She pointed to the urgency in finally achieving substantial results.”

She didn’t blink when she looked into Putin’s eyes in 2002. Will she blink in today’s higher-stakes contest of wills? 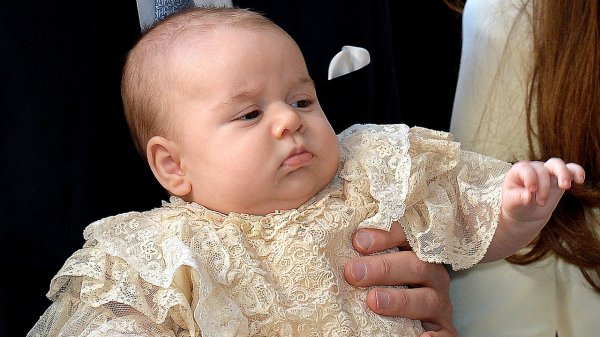 Prince George Gets A New Nanny
Next Up: Editor's Pick