A forensic police officer drops a marker next to blood at the site of what police say were clashes between anti-government protesters and supporters of Prime Minister Yingluck Shinawatra in Bangkok January 26, 2014
Athit Perawongmetha / Reuters
By David Stout

Blood was split in the streets of Bangkok once again on Sunday. With disputed general elections set to commence in a week’s time, antigovernment demonstrators loyal to the People’s Democratic Reform Committee (PDRC) clashed with supporters of Prime Minster’s Yingluck Shinawatra’s embattled administration leaving at least one PDRC protest leader dead and another 11 demonstrators injured.

“The violence represents a continuing ratcheting up of the tit-for-tat that could become symptomatic of a more pronounced move towards the potential for civil war in this country,” Paul Chambers, research director of political science at Chiang Mai University, told TIME.

The latest round of violence erupted on Sunday as PDRC demonstrators surrounded polling stations in Bangkok and towns located in opposition enclaves in the country’s south, preventing hundreds of thousands of voters from casting early ballots on Sunday.

Pictures of would-be voters being verbally abused, and in one case strangled, by protesters went viral on social networking sites, calcifying an ever-widening political divide that has continually deepened in the eight years since a military coup unseated the popularly elected Thaskin Shinawatra.

Following Sunday’s unrest, analysts warned that unless serious talks commence between Thailand’s warring parties, large-scale violence could erupt as Thais head to the polls for elections that are still scheduled for next Sunday.

“The new Bangkok reality is that a week away from the election, confrontation is growing, dialogue between the two sides is non-existent, and the situation is dancing on the edge of an abyss of serious violence,” Brad Adams, director of Human Rights Watch’s Asia Division, told TIME via email on Monday.

Despite the imposition of emergency rule last week, police appeared hesitant to restrain the rowdy demonstrators who took to the capital’s streets to intimidate potential voters from casting their ballots. Law enforcement officials, who are largely believed to support Yingluck, continue to grapple with their tenuous relations with the military, who are regarded as hardline royalists and furtive backers of the antigovernment protests.

PDRC demonstrators have been accused of trying to goad the country’s historically coup-prone armed forces to intervene in the current quagmire, which would amount to a massive blow to Thailand’s tenuous democratic development.

Late on Friday, the country’s Constitutional Court ruled that the Election Commission had the power to postpone elections if it secured Yingluck’s agreement. However, questions remain over whether the government and the commission would be able to negotiate a new timetable for general elections.

The opposition Democratic Party has already boycotted the ballot box and called for the implementation of vague political reforms before citizens are allowed to return to the polls. In the event that elections go ahead, Yingluck’s Pheu Thai Party is certain of victory, and would thus prove that it has the mandate of the people. A postponement of the polls in order to prevent worsening violence would most likely play in favor of the opposition’s “war of attrition” against Yingluck, according to Chambers.

On Monday, in an interview published in the Bangkok Post, PDRC leader Suthep Thaugsuban stepped up his offensive against the government by unleashing xenophobic vitriol. He suggested that former Prime Minister Thaksin Shinwatra, headed to Cambodia this week, was planning to “give direct commands” to “foreign armed men.” Suthep added: “I am glad the military are alert. Those who are patriots will not let any party use armed foreign forces to kill Thai people.”

Thais have historically distrusted neighboring Cambodia, which is viewed as a traditional enemy of the Kingdom and been accused of encroaching on Thai territory by claiming the Preah Vihear Temple that resides along the two countries’ shared border. The opposition Democrat Party has long espoused accusations that Thaskin and his proxy parties were selling the country out to Cambodia and were able to buttress their arguments when the former PM briefly served as economic adviser to Khmer strongman Hun Sen in 2009. 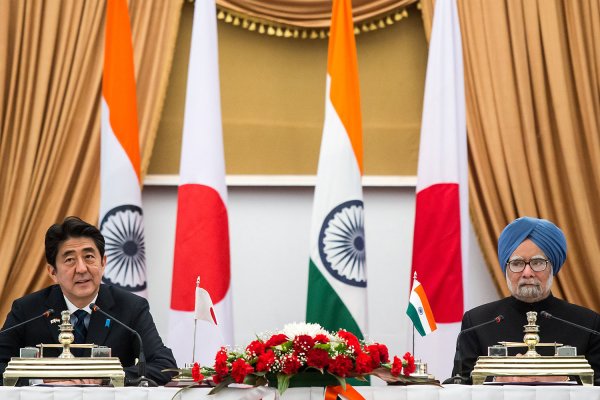 Japan and India Bolster Trade and Defense Ties
Next Up: Editor's Pick