A hundred days. That’s how long it took Xiao Meili to walk from Beijing, in the arid north, to the humid, central city of Changsha. Since September, the 24-year-old has been trekking south and west across the Chinese heartland, along rumbling highways, around construction sites, down dusty streets. She stops along the way to send letters to local officials. Her plea: China must change the way it handles sex abuse.

That request is bolder than it might seem. In China, as elsewhere, it is difficult to talk about sexualized violence, particularly against kids — it’s awkward, for one, and nobody wants to think they or their children are at risk. Over the last year, a string of high-profile incidents have started to change that. In one case, a 62-year-old primary school teacher was charged with sexually assaulting seven girls. His actions came to light when six of his victims developed genital warts. In another, 11 villagers were convicted of sexually abusing an 11-year-old girl “left behind” by migrant parents.

All too often, though, the issue goes unaddressed. Fear and stigma keep survivors and their families from coming forward, and those that do speak up are often shamed, not supported. Though the country last year vowed to crack down, laws remain weak. “In China, we blame victims, not abusers,” says Xiao Meili over tea and sunflower seeds in Changsha, the capital city of Hunan province, in south-central China. “That’s what we’re trying to change.”

A 2,000-km walk from Beijing to Guangzhou is not a bad way to capture attention. The sight of a young, female backpacker is relatively rare on China’s freeways, so people stop to ask questions and offer rides (which she declines). “They ask, ‘Why would you travel on foot? It would be so much easier to drive!'” she says. “Some say, ‘You’re crazy,’ but many express support.”

In a video about her journey, Xiao Meili (who uses her nickname for her activism) explains that walking is a way to reclaim a space — the street — where girls and women are sometimes at risk. It’s an idea that resonated online, where her writing, videos and drawings have earned a steady following on a popular Chinese microblog. Some of her readers offer money for accommodation, or a place to crash en route. Others, like Jia Wen, a 23-year-old art student, and Yuan Hang, a 24-year-old filmmaker, picked up sticks and joined her on the road. “Artists use form to change reality,” says Jia. “I want to see if we can use feminism to do the same thing.”

Xiao Meili and her friends are, in some ways, unexpected activists. Born in Sichuan province in 1989, Xiao Meili is part of a generation Chinese call post-’80s. Among older folks, the conventional wisdom is that these (mostly) only children of China’s economic boom are spoiled, apolitical bunch, more interested in designer fripperies than in social movements.

Raised by doting, aspirational parents many do indeed feel burdened by the pressure to succeed in a world where success is defined as a good education, a lucrative job, an apartment, marriage (to someone of the opposite sex), then a kid. For most families, cross-country protest walks are not part of the deal.

That, of course, is part of the appeal. Growing up, Xiao Meili cared little for politics. She was too busy studying. At university in Beijing, she started to read more, including feminist writing from the U.S. and Taiwan. Spending a semester in Taiwan gave her a glimpse of a “more equal” society. “China is more authoritarian and patriarchal, and this inequality leads to abuse,” she says.

In Beijing, where she lives when not on the road, Xiao Meili connected with feminists who are active, in different ways, in their communities. The ruling Chinese Communist Party sees collective action as a threat to social stability and often shuts down group demonstrations. Yet there is room for creative resistance. Xiao Meili starred in a Chinese adaptation of The Vagina Monologues, and on Valentine’s Day 2012, she dressed up in a blood-drenched gown to protest domestic violence.

When it comes to her family, she’s more reserved. “My parents don’t know I’m here. If I told them, they would try to oppose me,” she says. Besides, “they wouldn’t understand what I am doing here.” Jia’s parents wanted her to take the civil-service exam and get a steady job. “I don’t want that way of life,” she says. “I want to be freer.”

Being on the road offers that sense of freedom, though most days unfold in much the same way. Xiao Meili and her supporters wake up around 8 a.m. and start walking around 9 a.m. When they reach a new town or city, they stop by the post office to send letters asking local officials to improve sexual education, screen teachers and better investigate abuse claims.

And so it was on Day 101. On the cool, smoggy morning of Jan. 17, Xiao Meili, Yuan and Jia gathered around 9:15 a.m. to resume their journey south. For the next few weeks, as they make their way through Hunan province, they’ll be joined by three fresh recruits, all students, who read about the project online and joined up. First stop: the post office.

After mailing some letters, they set out. They walk slowly toward the edge of the city, where high-rise buildings are rapidly sprouting. Momentarily lost at the edge of a half-demolished street, they pause to consult their phones. “That way,” someone gestures, pointing the way through the mud. They hope to reach Guangzhou by spring.

— With reporting by Gu Yongqiang / Changsha 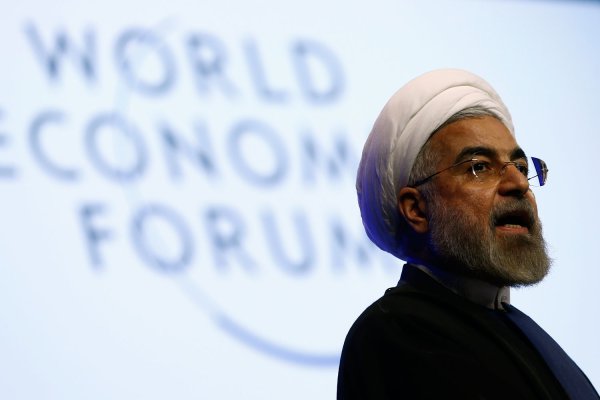 No, Iran's Rouhani Doesn't Tweet
Next Up: Editor's Pick