It has been a week of lost innocence for China. On March 1, a brutal massacre by machete- and dagger-wielding assailants claimed 29 lives in the southwestern Chinese city of Kunming, bringing the specter of terror to a nation unused to such horrifying episodes. The Chinese government has identified the attackers as separatists from the northwestern region of Xinjiang who were intent on joining a global jihadi movement. Then a week later, tragedy descended again. Malaysia Airlines Flight 370 destined for Beijing from Kuala Lumpur disappeared without a trace in the early hours of March 8. Of the 227 passengers, 154 were listed as coming from mainland China or Taiwan, with 38 Malaysians making up the second largest national contingent. (The dozen members of the flight crew were also Malaysian.)

Malaysia is a popular holiday destination for Chinese, particularly during the wintry, smoggy season in China. Late last year, Malaysia’s tourist authority predicted 2 million Chinese would visit in 2014. Among the Chinese believed to have boarded the flight are many holiday seekers and 29 members of an artist delegation from Sichuan province who were taking part in an exhibit in Kuala Lumpur. Others on the plane manifest included a group of 20 Malaysian and Chinese employees of a Texas semiconductor firm. Several expatriates living in Beijing are believed to have been on the flight as well, including students at the French school and a Canadian couple. Four Americans including an infant were also thought to have been on board.

With the plane still missing, the focus remains on search-and-rescue operations that are centered in waters off Vietnam. But flight experts, who are working with a frightening paucity of information, have concentrated on possible explanations of what went wrong: a catastrophic mechanical failure of the airplane or pilot error — like what happened to Air France Flight 447 in 2009 over the Atlantic Ocean, killing all 228 on the jetliner — or some kind of malign human intervention. “I would say right now that the probability of terrorism is low, but it should not be discounted,” says Rohan Gunaratna, head of the International Center for Political Violence and Terrorism Research at Nanyang Technological University in Singapore. “The investigation needs to be carried out with all possibilities considered: an act of sabotage, crime or terrorism, as well as mechanical failure.” Malaysian officials say they are not discounting any theory, including terrorism.

Despite this age of high-tech communications and surveillance, few details have emerged about what led MH370 to simply disappear from the sky. The aircraft was a Boeing 777, which has a workhorse reputation and a strong safety record. But some of the few pieces of information that have emerged are troubling. At least two of the passengers listed on the plane’s manifest, it turns out, were not actually on the flight. Local governments have confirmed that an Italian and Austrian, whose names were on the passenger list released by Malaysia Airlines, had their passports stolen in Thailand over the past two years. International law-enforcement agencies have been called in to help, including the FBI.

Whether or not the passports turn out to have had anything to do with the flight disaster, security expert Gunaratna says MH370’s fate highlights the need for governments to better coordinate in sharing information on stolen or lost passports. Interpol maintains a database on such passports, and the service is free. Around 40 million passports have been logged in the system. But registration with the service by local governments and usage of the database by immigration authorities are spotty. Only a “handful” of governments dutifully check in, according to Interpol, which estimates that last year more than a billion flights were taken by people whose passports were not screened against the database. Altered passports can be used for everything from drug running and illegal immigration to, potentially, terrorism. “This is a situation we had hoped never to see,” said Interpol Secretary General Ronald K. Noble in a statement. “For years Interpol has asked why should countries wait for a tragedy to put prudent security measures in place at borders and boarding gates.”

In its statement, Interpol confirmed that both the Austrian and Italian passports had been entered into their registry, one in 2012 and the other in 2013. Yet Malaysian immigration authorities did not discover the deception because they never checked the database. In fact, Interpol reports that no country’s authorities had ever checked the registry for these two passports. “Aviation is the most sensitive security domain of all, and there’s clearly been a glaring flaw in the security system because no one should be able to board a flight on someone else’s passport,” says Gunaratna. “Everything must be done to ensure there is no security breach; everything must be done to prevent any incident.”

Regional security analysts credit the Malaysian government’s commitment to counterterrorism, with efforts redoubled as Malaysian nationals were previously implicated in a series of terrorist attacks in Southeast Asia. At the same time, Malaysia is a regional air hub that deals with a large number of transit passengers. Two bombmaking masterminds linked to the Bali bombings and a string of hotel and embassy attacks in the Indonesian capital, Jakarta, were Malaysian. Both are deceased.

Two security experts, one American, say that they had heard no intelligence chatter about a possible terrorist attack involving airplanes in East Asia. That, of course, does not mean that such an incident could not occur. But there has been no sustained, consistent pattern of Asian terrorist groups targeting regional airlines.

None of this speculation can ease the sorrow of the families of the 239 passengers and crew of MH370. Chinese who just a week ago took to social media to pour out their grief for the Kunming attack, found themselves mourning anew. A week of horror continues. 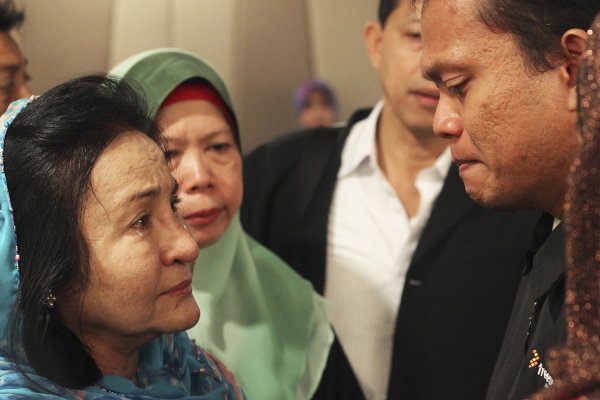