Can Veronica Mars Please Fan Funders and Newcomers at the Same Time?

At the heart of it, most movies have three basic aims:

The much-discussed Veronica Mars movie, in theaters March 14, complicates matters by adding a fourth option: Make The Fans Happy. While that’s hardly a new concept, especially in the modern movie era of franchise management and constant revivals of existing ideas and characters, the case could be made that it’s never really been a core aim for a movie before.

Instead it’s been a value add, something that certainly doesn’t hurt — who better to act as unpaid viral marketers than the core fanbase, especially in the early days of production, after all — but could (and, traditionally, will) be sacrificed in favor of appealing to the masses if the two options are in opposition (See, for example, Star Trek rebooting instead of fulfilling hardcore fans’ dreams and going with a follow-up to Star Trek: Nemesis or Man of Steel’s manslaughter finale, which led to much uproar at time of release).

Disregarding the wishes of the hardcore fans isn’t really an option for Veronica Mars, however; they’re literally the ones responsible for the film being made thanks to the Kickstarter that funded production. It’s the rare case when saying “we couldn’t have done this without the fans” is not just lip service and good PR, but the literal truth. Because of that, some level of fan service — not this kind of fan service, thankfully — is almost certainly forthcoming.

This is where Veronica Mars runs into potential trouble, for a couple of different reasons. Firstly, and most obviously, there’s the simple question of just how much fan service the movie should provide — and whether or not that’s going to hurt the movie for newcomers.

It’s already been revealed via promotional material, trailers and Kickstarter updates that almost every major character that survived the three-season-long television show (along with some minor ones, as well) will make an appearance of some kind in the movie, for example. For fans, this is a selling point: just like the high school reunion that serves as a McGuffin in the movie itself, they get the chance to catch up with what all those familiar faces have been up to over the last decade, with all of the potential for schadenfruede that brings with it.

For those who didn’t spend an hour each week in Neptune, CA, of course, having quite so many characters show up and play roles of various levels of importance throughout the whole thing could make the movie appear too busy, or even outright confusing. For the movie to succeed on a level beyond nostalgia, it has to be more than the punchline to old jokes that half the audience has never heard before — but will those who put the money up for the movie in the first place settle for that?

That’s the second problem: The fan appeal of the Veronica Mars movie wasn’t simply the chance to see the characters again, but the chance of wish-fulfillment in the way those characters have developed both individually and in relation to each other. The love triangle between Veronica, Piz and perennial bad boy Logan was not only the engine of the last season of the show — Piz taking over the role of “alternate love interest” from the pining, flat Duncan, as fans of the show doubtlessly recall — but of much of the promotion for the movie, as well. Will Veronica and Logan get back together? Should they?

Just asking that question identifies the trouble: Not everyone agrees on the answer. In fact, if you polled the Mars faithful for their ideal “ten years later” scenarios for the majority of the cast, you’d doubtlessly get a number of different, likely contradictory, answers. That saying about being able to please all of the people some of the time, or some of the people all of time is about to be lived by the Veronica Mars crew. Funding the Kickstarter and offering the idea of a reunion movie? That was the “all the people, some of the time” part. The movie itself? Now we get to some of the people — well, you know the rest.

Reunions, as most people know by now, are problematic at best; anyone who’s lived through a favorite band reuniting can attest to that. The distance between limitless potential and concrete reality can prove difficult for many to come to terms with, and leave the result almost more disappointing than the alternative of it never having happened. As it stands, the Veronica Mars movie might end up both being good and making money — but if it does so without fulfilling the expectations of those who not only wanted it the most but paid to make it happen, can it really be considered a success? 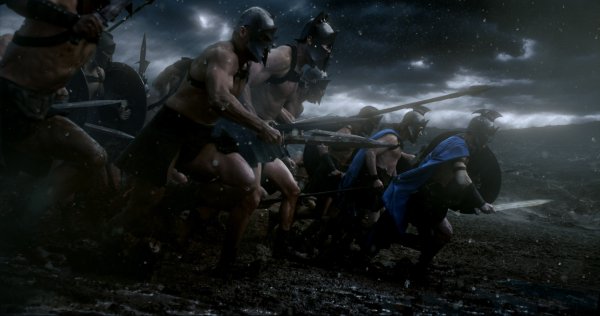 Zack Snyder and the West Should Stop Killing Ancient Persians
Next Up: Editor's Pick