9 Things That Mess With Your Hormones

Admit it: any time you feel off or out of whack and have no idea why, you probably chalk it up to hormones, right? The crazy thing is, you’re probably right. These chemical messengers buzzing around inside you pretty much rule your entire system, influencing your appetite, weight, sex drive, cycle, and more. But hormonal weirdness isn’t just a random occurrence over which you have no control. Certain behaviors can cause them to surge or sink—and do a number on your body in the process. Check out these nine habits that can screw them up and alter your mental and physical health.

Eating foods with too much added sugar is directly linked to weight gain—and excess pounds can lead your body to become resistant to insulin, the hormone that moves sugar into your bloodstream so your cells can get the energy they need, says Holly Phillips, M.D., a women’s health specialist in New York City and medical correspondent for CBS News. The result: a precursor to diabetes called metabolic syndrome or even full-blown type 2 diabetes.

Stressing Out Late at Night

Normally, levels of the stress hormone cortisol drop at nighttime, which helps you wind down and sleep. But becoming anxious or tense in the p.m. means your cortisol levels keep surging, so you’re too wired to catch Zzz’s, says Phillips. Make sure one of these seven things that are secretly stressing you out aren’t putting you on edge, and be sure to try these anxiety-relieving tips.

It’s a vicious cycle: Lack of sleep raises cortisol levels, and cortisol cranks up your blood sugar…which then plunges, making you stressed and craving junk food, says Phillips. Start scoring more snooze time, and your cortisol levels will even out.

Or Just One Night of Sleep Deprivation

When you sleep, levels of a hunger-related hormone called leptin surge, signaling to your body that you don’t need to eat. Toss and turn all night, and your body won’t produce the right amount of leptin—so you’ll feel extra hungry the next day and be more prone to weight gain.

Cortisol is the culprit again here: Caffeine signals to your body to boost production of cortisol, which can make you feel anxious and definitely not in a sleep-well mindset. Limit yourself to no more than two regular-size cups of joe a day, preferably before 3 or 4 p.m. Find out more about how caffeine affects your body.

Your Spotty Attendance at the Gym

Without regular exercise, your body won’t produce and release the optimal amount of endorphins, says Phillips. You know endorphins: They’re the feel-good chemicals in the brain that make you feel positive and alert. They also keep your immune system functioning well and increase levels of sex hormones so you score a libido lift. The more you move (cardio, Pilates, hiking, any kind of activity), the more endorphins your body will produce.

A plunge in body-fat levels due to either a super low-calorie weight-loss regimen or intense exercise sessions lowers estrogen levels, halting your cycle until your body fat returns to a healthy level, says Phillips. Scary stuff. Watch out for these six signs your diet is too extreme to make sure you’re not going overboard.

You know how a heart-pumping workout can make you temporarily forget about where to go for dinner? It has to do with the way aerobic exercise prompts a drop in levels of a hormone called ghrelin, which suppresses appetite, studies show.

Easing PMS With a Sweet Treat

Besides leaving you wired, sugar also does a number on brain chemicals that are already thrown for a loop during your PMS week. If your premenstrual symptoms leave you cranky and moody, sugar will just make you feel like more of a basket case, says Phillips.

This article was written by Esther Crain and originally appeared on WomensHealthMag.com. 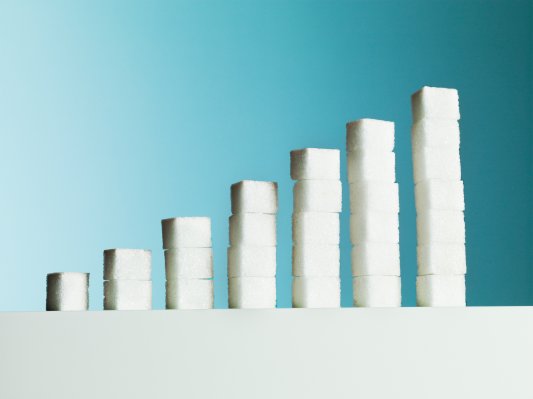 8 Surprising Foods Packed With Sugar
Next Up: Editor's Pick