Aaron Senne #17 — one of the plaintiffs in the lawsuit — and Greg Folgia #10 of the Missouri Tigers celebrate during a game on Apr. 17, 2009, in Manhattan, Kans.
Peter G. Aiken—Getty Images
By Lily Rothman

Baseball’s spring training is underway, so most of the sport’s young hopefuls are spending their time thinking of making the big leagues. But a group of former minor leaguers have something else entirely on their minds: the fact that they are getting paid a pittance. Upping the stakes from a three-plaintiff suit filed in February, a group of 19 former MiLB (Minor League Baseball) players and one current player last week filed an amended complaint in U.S. District Court against Major League Baseball, over what they say are violations of federal and state wage and hour laws.

“The Defendants have preyed upon minor leaguers, who are powerless to combat the collusive power of the MLB cartel,” the filing states. By their count, most minor leaguers earn between around $3,000 and $7,500 a year — plus $0 for training. The plaintiffs are seeking back pay for the times they claim their wages did not meet legal standards, as well as an injunction to assure that the defendants (the teams for which the plaintiffs played, baseball commissioner Bud Selig and the MLB as an entity) comply with labor law moving forward.

“Obviously current players are reluctant to join this kind of thing because they’re chasing their dreams and they don’t want to upset the status quo, but there’s been a tremendous amount of support,” says Garrett Broshuis, a former minor leaguer and current lawyer who was instrumental in organizing the case. (To wit: he reports that Matt Lawson, the only plaintiff still under contract, was already thinking of retiring, partly due to low pay.) Broshuis says that the situation for minor-league players is nothing new, but the ever-worsening plight of those players in light of inflation and tough economic times — as well as his own employment with a law firm with experience in this sort of case — led the group to take this step. This is the first lawsuit of its kind, Broshuis says.

The suit states that MLB is expected to make $9 billion in 2014 but that all minor-league players are subject to a uniform contract and that first-year players make a mere $1,100 a month for more than 40 hours of work a week during the season. That number goes against the common assumption that professional athletes are well-paid, and current players wouldn’t want to risk jeopardizing their careers by calling attention to their shoddy wages. Trying to be a baseball player is an inherently risky career choice; you’re not going to make a fortune while chasing a rich major-league contract. (The story of baseball’s pay laws is a complicated one. I wrote about it, and Garrett Broshuis’ quest to change things, for Slate in 2012.) The uplifting stories about players being called up to the big leagues, after years of sweating out the small paychecks and cheap motels of the bush leagues, are central to baseball lore. But Broshuis says the sport’s pay structure can be legal without messing with that history.

A spokesperson for Major League Baseball tells TIME that the organization does not comment on pending legal matters, but now the defendants have some time to respond to the case and Broshuis says they will probably file a motion to dismiss. If the case is not dismissed and awarded the certification that would let it move forward as a class action, he’s optimistic.

John Minan, a law professor at the University of San Diego and author of The Little White Book of Baseball Law, says the plaintiffs have “a reasonably good chance” of meeting the bar for a class-action suit. (The only potential snag, he says, is caused by the recent amendment to the filing: not every plaintiff falls into the single category of “former minor leaguer” now that there’s a player under contract involved.) Getting class certification doesn’t close off MLB’s potential defenses. Minan says there are wage-law exemptions for seasonal workers and creative professionals, both of which are groups into which the MLB could argue the MiLBers fall — but it might, Minan thinks, make things turn in the plaintiffs’ favor.

“It seems to me that [the defendants] are incentivized to settle at some point,” Minan says. “The minor-league players make some pretty strong arguments. It does seem like there is a fair amount of profit, if you will, in Major League Baseball. I would think that at the end of the day this is the kind of case that ought to be settled.”

For baseball, the suit may be the most crucial curveball of the season. 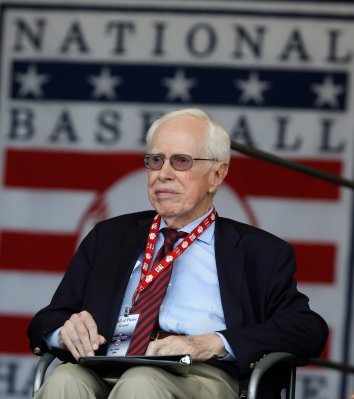 Doctor Behind ‘Tommy John’ Surgery Dies
Next Up: Editor's Pick