Late on Feb. 23, the caretaker of the South Delhi apartment occupied by Siddharth Varadarajan, a journalist, and Varadarajan’s wife, Nandini Sundar, a sociologist, was on his way back from nearby shops when he was accosted by a group of four men. They wanted to know if he worked for Varadarajan. When he answered in the affirmative, they began assaulting him, pulling him by his belt, kicking him in the stomach and punching him in the face. The men left the caretaker with a message: Tell your boss to watch what he says on television. They also mouthed vague threats connected to Sundar’s attempts to challenge alleged human rights abuses in the central Indian state of Chhattisgarh. They did not identify themselves, nor, Varadarajan told TIME, did they indicate who sent them.

It’s impossible, from what we know, to assign blame. India is weeks away from national polls and accounts of the evening assault outside Varadarajan’s apartment have highlighted his reputation as a critic of Narendra Modi, the opposition Bharatiya Janata Party’s Prime Ministerial candidate and self-described Hindu nationalist. Since 2001, Modi has been the Chief Minister of the western Indian state of Gujarat, where rioting along religious lines in 2002 led to the death of least 1,000 people, most of them Muslims. Varadarajan has written about the riots at length. He has been critical of Modi. But he has also been critical of the BJP’s chief political foe, the Congress.

Whatever the affiliations of the caretaker’s assailants, the events of Feb. 23 feel different from the assault on Wendy Doniger’s book The Hindus: An Alternative History—withdrawn by Penguin India in the face of a lawsuit by a small Hindu outfit—or the numerous other attacks on free expression in India in recent times. The physical violence—and the implied threat of more to come if Varadarajan doesn’t change his tune (though to what exactly was not made clear)—seems to mark out this particular attempt to pummel free speech. But here’s the truly depressing part: they share the same, illiberal context.

Consider, for instance, the choices facing the electorate as India gears up for what will be the largest democratic ballot in human history. If, as opinion polls suggest, Modi were to become Prime Minister, liberals in the country fear that voices that deviate from the BJP’s Hindu-nationalist hymn sheet might be silenced. And it true’s that, during his tenure in Gujarat, state authorities banned at least two books and one play. Among them was Great Soul: Mahatma Gandhi and His Struggle with India, Joseph Lelyveld’s book on the father of the nation, banned, it’s widely thought, because of reports suggesting that it portrayed Gandhi as bisexual. (The author insisted otherwise.) “The abnormal analysis about Mahatma Gandhi made by Joseph Lelyveld has hurt the feelings of not only Gujaratis but of everyone in India who possess modesty and wisdom,” Modi wrote on his blog in 2011, insisting that “our anger and rebuke are natural.” The book hadn’t even been released in India the time.

But let’s say the pre-election surveys have it wrong; that the BJP isn’t in the ascendant; and that, come polling day, the incumbent Congress-led coalition isn’t booted out of office. Were this to happen, the Congress would likely name Rahul Gandhi—the son, grandson and great-grandson of former Prime Ministers—as the nation’s chief executive. In a recent speech, he said his party wasn’t in the business of “subverting democratic institutions.” No: it sought solutions to the nation’s problems via “peaceful, democratic and constitutional means.” A banner that popped up when you clicked through to the party’s website earlier this month pushed a related message: “Don’t let others threaten our freedom of speech and individual liberty. Vote Congress.” Which sounds encouraging, until you consider the historical evidence.

The proscription of free speech has a depressingly long history in independent India but perhaps the best-known instance was the decision in 1988 by India’s Finance Ministry to ban The Satanic Verses by Salman Rushdie. Fearful of offending the country’s Muslims, the government of Rahul’s father, Rajiv Gandhi, moved against the book well before Iran’s theocratic leadership bared its fangs—and 25 years on, The Satanic Verses is still not legally available in India. More recently, in 2010, lawyers for Rahul’s mother and the Congress President, Sonia Gandhi, threatened legal action over a Spanish author’s fictionalized account of her life. And in January, a defamation case filed by a former Civil Aviation Minister in the Congress-led government resulted in a settlement that saw Bloomsbury India pull copies of a book about the country’s struggling state-owned airline.

There are other examples, involving other political parties, other states and private individuals. They don’t always agree; in fact, they’re often strident in their opposition to one another’s views. But, sadly, they seem united in their belief that the way to deal with differing, critical or otherwise uncomfortable views is by attempting to muzzle those who have the temerity to voice them. 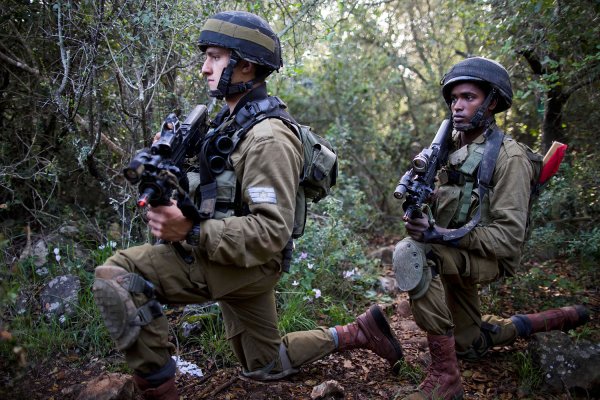 Number of Arab Christian Recruits in Israeli Army Jumps
Next Up: Editor's Pick