Miley Cyrus and Katy Perry Feud Over Kiss: "God Knows Where That Tongue Has Been!"

When Miley Cyrus and Katy Perry shared a brief kiss at Cyrus’ Bangerz tour show at the Staples Center in Los Angeles on Feb. 22, everyone basically shrugged and carried on with their lives. The pop stars, however, seem unwilling to do the same.

On Wednesday, Perry appeared on a morning news program in Sydney and revealed the kiss turned into a little more than she had bargained for: “I just walked up to her to give her a friendly girly kiss. You know as us girls do. And then she like tried to move her head and go deeper and I pulled away. God knows where that tongue has been!”

That could have been the end of it, but Cyrus wasn’t inclined to let her good name be besmirched without throwing back a jab of her own. The next day, Cyrus took to Twitter and delivered an uppercut: “Girl if ur worried abt where tongues have been good thing ur ex boo is ur EX BOO cause we ALL know where THAT [tongue emoji] been.”

Girl if ur worried abt where tongues have been good thing ur ex boo is ur EX BOO cause we ALL know where THAT 👅 been pic.twitter.com/IO6KwRzw2y

It’s impossible to say with 100 percent certainty, but it’s a safe bet the Cyrus was referring to Perry’s former flame John Mayer, who has also dated Jessica Simpson, Taylor Swift, Jennifer Aniston and, possibly, quite a few others. Perry and Mayer reportedly split last month.

Perry has yet to respond, but this spat could have some legs—if Cyrus’ tweet doesn’t prove to be a knockout blow. 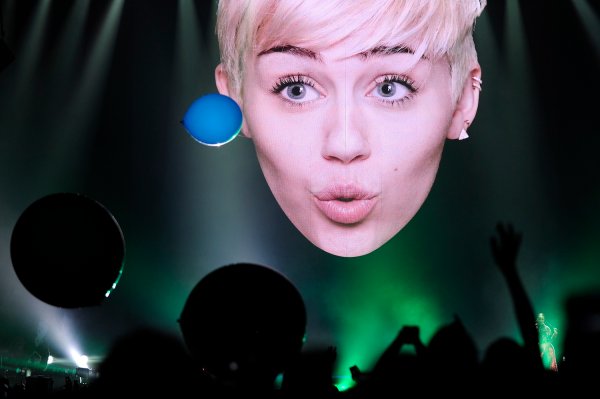