Ultraman, the popular Japanese superhero, has crossed the Malaysian government’s red line. The country’s Home Affairs Ministry has banned a Malay-language edition of an Ultraman comic book for containing “elements that can undermine public security and societal morals,” according to the Associated Press.

Malaysia media outlets, which first reported the ban on Thursday, had speculated that the move was spurred by the apparent use of the word Allah in the comic. A court ruling late last year banned non-Muslims in the country from using the term, even though the word is simply Arabic for God and Malaysian Christians have long used the word in that sense. (The Catholic Church is seeking to appeal the ruling.)

A page from Ultraman, The Ultra Power, the now banned comic book, was posted on Twitter, showing the use of the word Allah.

“He is considered, and respected as, ‘Allah’ or the Elder to all Ultra heroes,” reads the translation published by the Malaysian media outlets.

A government representative confirmed the ban. In a statement on Friday, the Home Affairs Ministry said that because “Ultraman is idolized by many children,” equating the lead character, Ultraman King, with Allah would especially “confuse Muslim children and damage their faith.”

Malaysian netizens have taken to social media to mock the government’s heavy-handed response.

“They got nothing to do at KDN [the Home Affairs Ministry] … sigh!!! Ultraman [is] also ban[ned] … What next … Ultimate stupidity,” tweeted Jackie Wong.

The Ultraman ban is the latest example of growing hard-line religious conservatism under the country’s United Malays National Organization–led government. Earlier this year, authorities in Selangor raided a church and seized more than 300 Bibles that officials claimed referred to God as Allah in the Malay language.

“Banning books is a serious matter and the ban on Ultraman clearly reveals the rights-abusing tendencies of this ministry, its hidden decisionmaking, and its total lack of accountability to the Malaysian public,” Phil Robertson, deputy Asia director at Human Rights Watch, tells TIME.

“If Prime Minister Najib [Razak] wants to play hero in this show, he should start by rescuing Ultraman and then demand some real transparency and accountability from the Home Affairs censors.”

The widely popular Ultraman franchise, which depicts a superhuman who fights monsters, first began as a television series in Japan in the mid-1960s and has gained a massive pan-Asian following over the decades with the story serialized across myriad platforms including comic books and films. 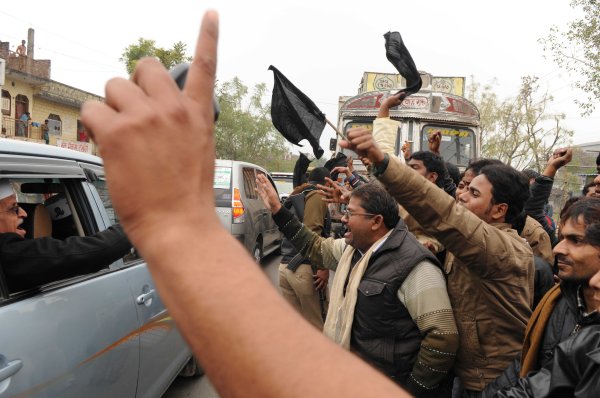 India's Newest Political Party Takes the Fight to the Gandhi Heartland
Next Up: Editor's Pick