A murdress Vice President is attempting a coup. A terrorist entered US soil and is presumably plotting destruction, in between attending Executive Branch galas. The White House Chief of Staff’s husband is hell-bent on exposing political corruption in a way that would make Deep Throat look prudish. But this week’s Scandal began with a far more dramatic storyline: A love triangle aka what show-runner Shonda Rhimes does best.

“I am not a hen and my house is not yours”

Fitz “I don’t believe in using my indoor voice” Grant is really mad that Olivia, his mistress, has a fake boyfriend to keep up appearances, and he doesn’t care who knows it. As Olitz angrily put on their clothes (probably still warm from recently being ripped off each others bodies), Fitz shouts that Jake’s re-entrance into Olivia’s life is akin to a fox entering his hen house. [Note: Jake, along with anyone else in a two mile radius can hear his dismay.]

But however many times Olivia falls back into Fitz’s grabbing arms, she is not weak. She is not a hen. Her house is her own. “I am not a prize at the state fair, you can’t win me,” Olivia says. “My whole life is not about you. I have goals. I have dreams. I do this for me, Jake by my side is for me,” so that she can have a career outside of public scrutiny. Dumbfounded, Fitz apologizes. But Olivia doesn’t want to be touched. She takes a breath and walks into the hall to meet her fake boyfriend who’s also her ex-boyfriend … because why make this less emotionally complicated?

Olivia’s hen house might not belong to Fitz, but Jake has staked a claim to at least her kitchen appliances. “Stock your damn fridge,” he says firmly, after being called to Olivia’s apartment only to be falsely accused of siccing Quinn on her father (we’ll get there). Jake continues, “If I’m going to be your fake boyfriend all day, I’m going to come home at the end of it and drink real beer and eat real food. Wine is not beer and popcorn is most definitely not real food.”

While I’m ideologically opposed to the idea that wine and Orville Redenbacher aren’t two staple food groups, Jake gained points for demanding some form of acknowledgment in this strange arrangement. He will support Olivia (a woman he clearly still has feelings for) as she pursues the president and her career, but he demands a level of respect.

And it apparently has a winning effect on Olivia. When Jake is watching videos from within the Oval Office — it turns out B613 has a secret service spy who reports to the organization’s leader (which means Papa Pope must have had access to videos of Fitz and his daughter getting it on… gross) — he hears Fitz ask if Olivia has feelings for Jake. “Honestly,” Olivia says, “I don’t know.”

Mellie’s humanity is showing. And it’s about time.

It’s rare to see Mellie depicted as having a soul. Unfortunately much of her humanity is tied to tragic circumstances: Getting raped (and possibly impregnated) by Fitz’ father and, as we learned this week, trying to take her life by overdosing on Oxycontin. In flashbacks, we saw the dissolving of Mellie and Fitz’ relationship and the beginning of her and Andrew’s. Andrew overheard Fitz yelling at her for her coldness and recoiling at her touch and soonafter found her passed out after taking a whole bottle of Oxy. Andrew saves Mellie without calling paramedics or informing Fitz, but when he tries to talk with her about what happened, Mellie’s first reaction is to recoil. Used to dealing with Fitz, she seethes that she expects he wants recognition for being a good guy. Andrew surprises her by saying that he doesn’t want to be thanked but rather to know why. And Mellie tells him what she won’t reveal to her husband, that she was raped. Andrew keeps her secret, confesses his love, but forces no action.

Back in present day, obviously rumors of drug abuse in the governor’s mansion are running rampant. Andrew is quick to take the blame to protect Mellie, he says he had a back injury and needed pain meds quickly. As Olivia runs around trying to kill the story, she discovers that the meds were actually for Mellie and decides to have a heart-to-heart with the first lady about the emotional dangers of hiding love for powerful men. In true Mellie fashion, she slams Olivia: “When I had the chance to cheat I kept my knees together and said no. We are not the same.”

But the restrained Mellie of the governor’s mansion is no more. Finding Andrew staring at a portrait of Jackie Kennedy, Mellie coyly tells him, “We do not touch the First Ladies,” before revealing that the story has been killed. “What would happen if I kissed you right now?” Andrew asks. Well Andrew, “we” do not kiss First Ladies, they kiss you. Mellie goes in for a short but steamy kiss under the watchful, but we hope approving, painted eyes of First Ladies past.

We find James still leaking and still freaking out that Cyrus is going to find out that he’s leaking and, ya know, kill him. In other news, James thinks the name Publius is dumb, too. “I never said it out loud.”

What’s with the other Gladiators? Storylines have been sparse but:

– Abby tells David that she loves him. She then puts her money where her mouth is by saving his life at the end of the episode by stuffing him in the trunk of a car on his way to leak information about Cyrus to a reporter. (Charlie was on his tail and would have murdered him). David loves Abby, too. Hooray.

-Harrison is sleeping with Adnan Sharif. While he missed parts of her (boobs?), others not so much. Adnan reveals that Harrison was involved in something shady called Clearwater — he’s committed crimes other than insider training. We also learn that Adnan has a strange connection with Cyrus and is working in cahoots with Mama Pope (who is also back in the US). This can’t be good.

-Huck brings Olivia coffee. Three times. Olivia doesn’t like coffee (should have gone with a pinot!) but Huck explains, “It’s a gesture. It means I’m sorry about Quinn. People get people coffee when they’re sorry. I could get you tea instead.” Although, Huck also points out that really his Quinn torture was his fault because she knows what he’s like and gave him too long of a leash.

– Unfortunately, Quinn had the biggest storyline in the episode. She beats Charlie to gathering information on Papa Pope (who’s working with Sally’s right-hand-man Leo) even though she was explicitly instructed not to get involved. Thus, she gained street cred with the organization and Jake. Her success is slightly surprising considering that she couldn’t even stalk Rowan without getting caught by Olivia, who Quinn threatens to shoot if she won’t get out of the car and try to bring her “home.”

Question of the night:

Mellie to Fitz: “What does it feel like to be so hot for someone so turned on by them that you would put everything you ever worked for at risk? Does it feel good? Is it an amazing high? Or is it so intense that it hurts and feels like a fire in your belly?” 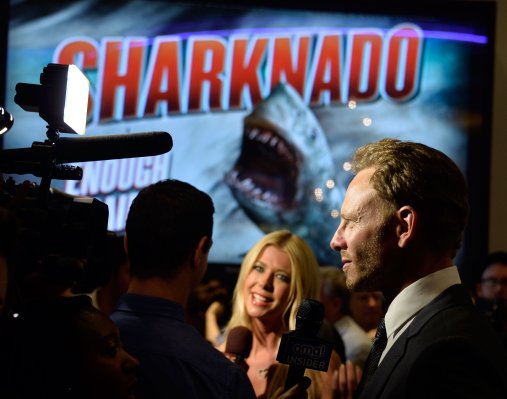 Sharknado 2 Is Coming in July
Next Up: Editor's Pick