People displaced by violence attempt to create a semblance of daily life in a sprawling camp at M'Poko International Airport in Bangui on Jan. 2, 2014.
Rebecca Blackwell—AP
By Andrew Katz

Months of widespread violence has pushed tens of thousands of Muslims out of the Central African Republic and led to a “cleansing” in its western region, a United Nations official said Thursday as the Security Council mulled a proposal to send 12,000 additional peacekeepers into the spiraling conflict.

The mineral-rich, landlocked country has been in a constant state of upheaval since last March, when the predominantly Muslim rebel coalition Séléka toppled the government. In December, two days of carnage in the capital city of Bangui left almost 1,000 people dead and paved the way for the largely Christian militias called anti-balaka to exact a revenge that has included mass looting and public executions.

(MORE: The Muslims of the Central African Republic Face a Deadly Purge)

“Tens of thousands of them have left the country, the second refugee outflow of the current crisis, and most of those remaining are under permanent threat,” said Antonio Guterres, U.N. High Commissioner for Refugees, Reuters reports. “The demon of religious cleansing must be stopped—now.”

Valerie Amos, the U.N.’s humanitarian chief, said more than 650,000 people remain internally displaced and that 300,000 others have fled to neighboring countries like Chad and Cameroon. At least 2,000 people have been killed since December.

Two thousand French troops and 6,000 peacekeepers from the African Union are currently on the ground; 1,000 more from the European Union will also be deployed. The force being considered by the Security Council was recently recommended by Secretary-General Ban Ki-moon and, if approved, would not ship out within six months. 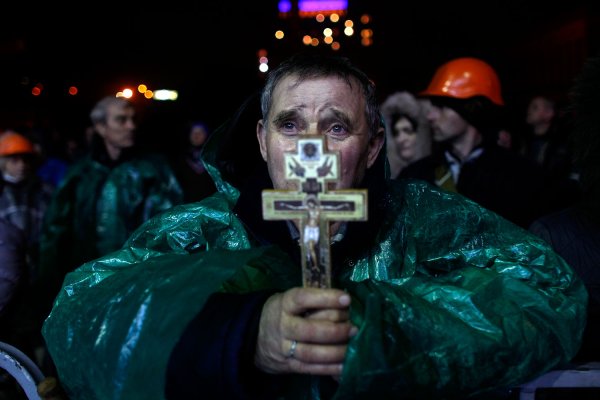 Putin Says Ukraine's Revolutionaries Are Anti-Semites
Next Up: Editor's Pick