A comparison of two raw Pancam photographs from sols 3528 and 3540 of Opportunity's mission (a sol is a Martian day). Notice the "jelly doughnut"-sized rock in the center of the photograph to the right. Minor adjustments for brightness and contrast.
NASA / JPL-CALTECH
By Denver Nicks

Scientists analyzing images from the Mars Opportunity Rover are flummoxed after a rock mysteriously appeared in the rover’s field of vision last week.

Some hypothesize the rock may have landed there after being flung skyward by a meteor that landed nearby, but the leading theory blames the rover itself for overturning a nearby rock with a quick, jittery wheel maneuver.

“You think of Mars as being a very static place and I don’t think there’s a smoking hole nearby so it’s not a bit of crater ejecta, I think it’s something that we did,” Squyres said. “We flung it.” 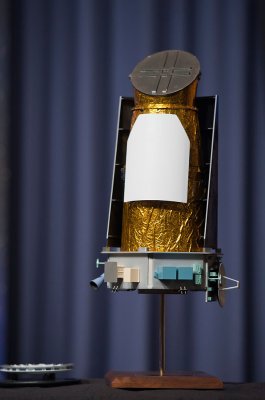 There Are Second Acts After All—Even for Spacecraft
Next Up: Editor's Pick