Here’s how Michelle Nunn is running for Senate in Georgia: she name-drops George Bush, both father and son, quotes former Defense Secretary Bob Gates and talks about tackling the federal debt to “secure the future for future generations.” She also uses the V word a lot. “I worked very closely with the Bush family because we had a shared commitment to … making a difference to communities across this country, so those are the values that I carry with me to this Senate race,” she says. “I combine them with some family values.”

You’ve probably guessed by now that Nunn is a Democrat, running for office in a year that is shaping up to be uglier than normal for the President’s party. The Republicans need to pick up six seats to retake the Senate and can likely count on three–in South Dakota, Montana and West Virginia–already. That leaves Democrats praying for at least six wins in eight states, unless they get lucky somewhere they haven’t won in a long time. Somewhere like Georgia.

It’s a measure of the Democrats’ current problems that they have turned to someone who has never before run for office to save their bacon in the Peach State. The candidate’s claim to fame, of course, is that she is the daughter of Sam Nunn, the Democrat who represented Georgia in Washington for 24 straight years, from 1973 to 1997. Nor does it hurt her chances that she has been working tirelessly for more than a decade for a charitable foundation dear to the heart of America’s only other beloved political patriarch: George Herbert Walker Bush.

Her final qualification? Her competition. She is facing an almost comical field of Republican challengers who have been doing everything they can to commit political fratricide. In one recent ad, Republican businessman David Perdue depicts his seven GOP rivals as a bunch of babies in diapers crying on the floor.

But to win, Nunn must first expand her party’s reach. In recent statewide races, Democrats have lagged behind Republicans by huge margins–as many as 250,000 to 300,000 votes. That means that Nunn has eight months to find, woo and win over several hundred thousand people.

Watching Nunn, 47, campaign at a lunch in Valdosta recently, it’s clear she has the political gene. She ensures that everyone has a bite of the appetizer before speaking, remembers each name and saves all business cards and children’s crayon drawings, offering quick reminders to aides to follow up. She lights up when someone makes a good argument about policy. And even if she doesn’t seem to relish the game as other politicians do, she knows how it is played.

She grew up mostly in Washington; her father was elected to the Senate when she was 5½. She returned to Georgia in 1989 after graduating from the University of Virginia and became the sole full-time employee of Hands On Atlanta, a nonprofit that recruited young professionals to spend one day a month volunteering for a variety of causes. Nunn then took over a larger nonprofit that in 2007 merged with Points of Light, a foundation inspired by George H.W. Bush. Nunn served as CEO of the joint organization, which marshaled more than 4 million volunteers worldwide in 2012. The foundation moved its headquarters from Washington to Atlanta to accommodate Nunn, who lives there with her husband and two children.

As Nunn’s profile grew, Democrats tried repeatedly to recruit her as a candidate. She always declined, and there wasn’t much incentive for her to do otherwise. After her father’s retirement, Georgia voters tilted increasingly, unrelentingly, red. Which meant the odds of a win by a Democrat, even one with a sainted last name (and really good connections in Kennebunkport), lengthened with each passing year.

Until recently. A decade ago, 70% of Georgia voters were white. In 2012, that number fell to 61%. More than 1.5 million people have moved to Georgia since 2004, and of those, 38% are African American and 28% are Hispanic. Georgia is now nearly 45% minority. There are more than 450,000 unregistered black voters in the state, according to the 2010 Census. So when party elders came calling this time, the former high school basketball star finally decided to take the shot. “It was a big decision for someone with a 9-year-old and an 11-year-old,” she tells TIME. “I believed I could make a difference.” Backed by Emily’s List, national Democratic groups and grassroots organizations she has helped supply with volunteers for decades, Nunn wants to sign up at least 10,000 volunteers to work in her campaign, while outside groups are working to register more than 100,000 voters.

That may make it easier to pick off Republicans like John Gates, a 62-year-old veteran in Army khakis, who sees in the daughter enough of the father to take a chance. “I voted for Sam Nunn but not for a Democrat since,” he says, reflecting the patterns that have been clear across the state. “I came to see if she had his grit,” he continues. “And gosh darn, she did. I’m going to be voting for her. Heck, I’m going to be volunteering for her.”

Nunn’s relationship with Obama is trickier. She supports Obamacare, but she wants to delay the individual mandate, create a new tier of more-affordable insurance plans and expand the tax credits available to small businesses. She wants the President to approve the Keystone XL pipeline, opposed by environmental groups, that would run from Canada to the Gulf Coast. And part of her “Five ways to fix Washington” platform requires members to pass a budget every year or forgo their paychecks. When I point out that it was Senate Democrats who failed to pass a budget four out of the past five years, Nunn says she has no problem taking on Democratic leaders. “There’s blame on both sides,” she says.

Besides, if there was ever a time and place where Republicans seem unready to seize the day, it is this year in Georgia. Three of the candidates vying to face Nunn favor impeaching Obama. Representative Paul Broun, a physician, has lambasted evolutionary theory as “lies from the pit of hell” and once sponsored a contest to give one of his supporters a free AR-15 semiautomatic rifle. Representative Phil Gingrey, another physician, has defended failed 2012 Missouri Senate candidate Todd Akin’s controversial comments that women have a natural defense against pregnancy in cases of “legitimate rape.” Representative Jack Kingston suggested that lower-income middle schoolers should sweep the floor to earn school lunches. A recent Public Policy poll found Nunn narrowly ahead of, or even with, all comers. Republicans claim not to be worried. “Michelle Nunn is soaring with the far left wing of the Democratic Party,” said Michael McNeely, vice chair of the Georgia Republican Party.

But so far Nunn doesn’t sound like someone with her feet off the ground. “The contrast is clear and will continue to be evident and grow,” she says. “I believe that ultimately Georgians are looking for more pragmatism.” In 2014, Democrats may have a great deal more than just Michelle Nunn riding on that faith. 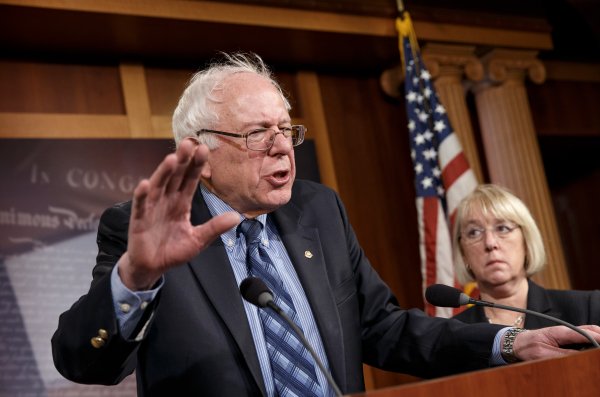 Bernie Sanders: I'd Be a Better President Than Hillary
Next Up: Editor's Pick