Lars von Trier calls his new movie Nymphomaniac. In print advertisements for the two-part project and sometimes in editorial publications willing to play along, a pair of parentheses substitutes typographically for the o in the word. This winky flourish gives the title an emoticonically dirty look. In some posters, individual photographs of the actors starring in the Danish filmmaker’s relentlessly graphic film–including Charlotte Gainsbourg, Stellan Skarsgard, Uma Thurman, Shia LaBeouf, Jamie Bell, Christian Slater and Willem Dafoe–purport to show each player in sexual ecstasy, making what slangsters these days like to call an O-face.

Nymphomaniac: Volume I will be released theatrically in the U.S. on March 21, with Volume II following on April 4. The marketing is some kind of brilliant, but don’t be misled: there are plenty of simulated orgasms but precious little ecstasy in this tortured, obsessive study of female sexuality and its discontents, interpreted by a man without a (). A man who suffers from crippling bouts of depression and a litany of phobias. An artist who returns again and again in his work to female characters who are martyrs (Breaking the Waves, Dancer in the Dark) or monsters (Antichrist). An artist for whom the imprecise, flash-point term misogynist misses what is fascinating–and frustrating–about his self-punishing, intermittently revelatory art: these women, abused and abusive, are Lars von Trier, or at least manifestations of his struggles.

For a soul tormented by fears, he is an exceedingly fearless pusher of artistic boundaries. (He’s one of the founding brothers of the radical cinematic aesthetic movement Dogme 95.) He also has the support of an artistic team that loves him–why else would Gainsbourg, his bruised-looking muse, put herself through the wringer to star in all three projects in the director’s so-called Depression Trilogy: Antichrist (2009), Melancholia (2011) and now this? Von Trier is an impish, provocative, self-destructive, artistically brilliant mess. To believe in him is to be interested in accompanying him wherever his agonized spirit wanders next. But man, right now this Dane is dancing in his own repellent dark.

Still, it’s not surprising that Nymphomaniac is receiving early admiration–from female and male critics both, it should be said. The movie is out there. Von Trier structures his story in flashback, as Gainsbourg, playing a battered Scheherazade, recounts her raw life as a self-diagnosed nymphomaniac–don’t call her a sex addict; that’s too slut-shaming, suggesting a need of rehab–to an enthralled Stellan Skarsgard. He plays a virginal older bachelor who finds her beaten up and bedraggled in a rain-soaked alley. He takes her in, nurses her with cups of tea and murmurs of there, there, you’re not a bad girl, no you’re not, tell me more. He also supplies digressive information about fly-fishing and Jews, among other droll topics.

In the first part, a girl named Joe (played by British newcomer Stacy Martin) discovers her body, her allure and her outsize sexual appetites. (Let lexicographers parse the traditionally male spelling of her name.) In the second part, Joe (now played by Gainsbourg) becomes increasingly desperate in her insatiable hunger. There is no happiness here. The movie’s concluding act suggests there is no hope either.

Meanwhile, in yet another promotional image for the movie, a bespectacled von Trier himself gazes–clothed–at the viewer with his mouth taped shut. The pose is a reference, for the enjoyment of Larsian historians, to the time in 2011 when he was briefly declared persona non grata at the Cannes Film Festival. The hilariously dramatic banishment–just another clown act at that annual international cinema circus–followed exceedingly stupid comments the director made in supposed sympathy with Adolf Hitler during a press conference following the first screening of Melancholia.

This Larsian–as some of his admirers are known–was at that press conference. And the lasting pity is that the hoo-hah was incited, to be sure, by von Trier himself, a shy and fearful man thrust in front of a microphone in a room full of yapping reporters. But it was fanned, gleefully and with mischief, by lazy journalists eager to manufacture “serious” outrage from a couple of dumb, tone-deaf comments tossed off by a professional provocateur. And the glaring uproar temporarily eclipsed the movie being premiered. Which, this Larsian thinks, is a masterpiece.

In one of those stunning bursts of expressive clarity and dramatic eloquence that separate great artists from your average depressives, von Trier explores mirrored images that express human suffering with deep tenderness. Melancholia refers to a sadness of the soul and also to the name of a rogue planet on a trajectory to collide with the Earth, obliterating all life. Dimness and brightness are metaphorical and literal in this profound movie. As von Trier appears to be struggling with prolonged blackness in Nymphomaniac, this Larsian follows him still, wishing for him a lamp to find his way back again to more light. 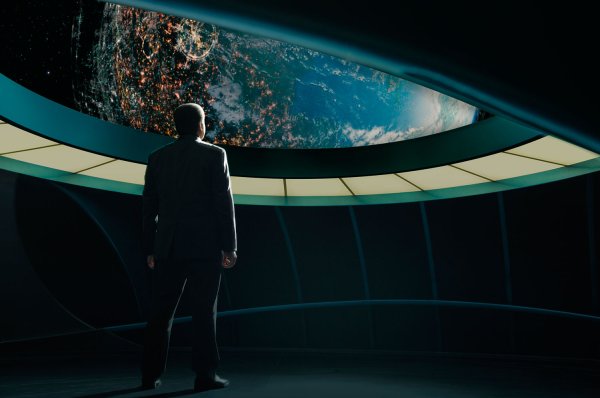 Fox's Cosmos Takes Sides for Science
Next Up: Editor's Pick