It's Official: Wildlife Traffickers Will Incur the Wrath of Allah

A female orangutan gets into a cage after being rescued in Pasuruan, East Java, on July 10, 2012.
Sigit Pamungkas—Reuters
By Charlie Campbell

Noah had his ark. St. Francis bestowed blessings. And now religious leaders in Indonesia have unleashed their spiritual arsenal to protect our furry and four-legged friends — with a fatwa.

The Indonesian Council of Ulama, the top theological body in world’s largest Muslim nation, has decreed that illegal wildlife trafficking is haram, or forbidden by God. According to the terms of the 15-page document, Indonesia’s 200 million Muslims must “actively participate in the efforts to protect endangered species, including conflict resolution between humans and wildlife in the region.”

“This fatwa is issued to give an explanation, as well as guidance, to all Muslims in Indonesia on the sharia law perspective on issues related to animal conservation,” said Hayu Prabowo, chair of the Council of Ulama’s environment and natural resources body.

To non-Muslims, the term fatwa is commonly associated with calls to slay blasphemers, after Iranian Supreme Leader Ayatollah Khomeini in 1989 infamously demanded the execution of British Satanic Verses author Salman Rushdie. In truth, though, a fatwa is simply an interpretation of Islamic law by a qualified authority.

The vast majority are benign, and cover such everyday quandaries as how to obverse the daily five calls to prayer if stuck on a long-haul flight. Earlier this year, the United Arab Emirates’ top religious body issued a fatwa forbidding Muslims from participating in a space mission to Mars.

This latest fatwa is a telling indictment of wanton ecological degradation in the world’s fourth most populous nation. Vast swaths of Indonesia have been clearered for timber as well as rubber and palm oil plantations, decimating the habitats of critically endangered species such as the Sumatran tiger, pigmy elephants, orangutans, Java rhinos, amongst many others.

In addition, there is a booming illicit trade in protected animals. According to the Wildlife Conservation Society, the Indonesian archipelago boasts the highest number of internationally threatened mammals and birds, largely due to uncontrolled hunting. Tons of turtles and pangolins (a scaly anteater) are exported on a weekly basis, and around 1.5 million wild-caught birds are sold in a single Java market each year.

The Council of Ulama got involved following a Sept. 2013 field trip to Sumatra organized by Jakarta’s Universitas Nasional, WWF-Indonesia, and the U.K.-based Alliance of Religions and Conservation. Appalled by what they witnessed, Muslim leaders decided divine intervention was required.

And so, although not legally binding, Indonesian wildlife traffickers must now negotiate more than just earthly justice. “People can escape government regulation,” adds Hayu. “But they cannot escape the word of god.”

Most Popular on TIME
1
Moderna's Coronavirus Vaccine Looks Promising In Its First Tests
2
The One Must-See Peacock Original Show
3
Coronavirus Map: See How COVID-19 Has Spread 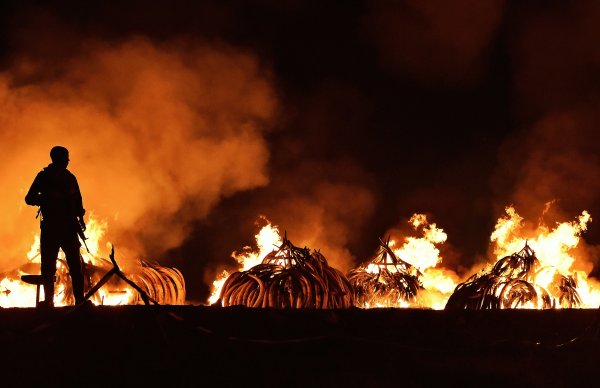