At West Point on Wednesday, President Barack Obama took his latest stab at defining a foreign policy vision he has spelled out many times before. His speech was less a grand intellectual exercise than a political gambit — meant to stanch a recent torrent of criticism about his foreign policy woes.

So far, it doesn’t seem to be working, at least not among the foreign policy elites whose opinions shape broader attitudes.

Take the stink eye Obama drew from the New York Times‘s left-leaning editorial page, for example, which said the address “did not match the hype, was largely uninspiring, lacked strategic sweep and is unlikely to quiet his detractors, on the right or the left.” The Times focused on a non-ideological gripe: that Obama’s specific agenda remains vague, and said he “provided little new insight into how he plans to lead in the next two years.” But the paper also swiped him from the political left, calling his defense of continued partnership with Egypt’s repressive military regime “disturbing,” and his claim to support more transparency for counter terror operations like drone strikes and NSA surveillance “ludicrous.”

Also unimpressed was the centrist Bloomberg View, which calls Obama’s speech “unlikely to tamp down criticism of his conduct of foreign policy as weak, indecisive and unconvincing,” particularly given, as others complained, “the mushiness of the initiatives he proposes.”

More predictable were harsh editorials from the Washington Post and the Wall Street Journal, both longtime Obama foreign policy critics. A Post editorial complained that Obama offered mere words when new policies are needed, lamenting that his reticence to use force puts him “at odds with every U.S. president since World War II.” The Journal groused (along with many others) that Obama set up a false rhetorical choice between wanton military adventurism and pure isolationism—and it snarked at omissions in the speech, from the failed Middle East peace process to ongoing chemical attacks in Syria.

The spitballs have come from abroad as well. The London-based Financial Times said the speech “has done little to dispel the suspicion that priorities are shaped more by U.S. politics than facts on the ground.” Chemi Shalev, an editor for the left-leaning Israeli daily Haaretz, called the speech “lackluster” and said it “failed to live up to the hype that he would proclaim American training and arms for anti-Assad rebels.” (Obama said only that he would work with Congress to “ramp up” support for moderate Syrian rebels.)

American columnists and opinion leaders weren’t much friendlier. Richard Haas, chairman of the Council on Foreign Relations, said it “was more clear what [the speech] was against, than what it was actually for.” Foreign Policy‘s David Rothkopf trashed the address as “a dribbler into the glove of the first baseman. It provided neither reassurance to allies nor anything remotely like a foreign-policy vision.” Kathleen Hicks of the Center for Strategic and International Studies lamented that Obama “failed to tie [his] strategic frame to the underlying funding and hard choices necessary to make it possible.”

Not everyone hated the speech: While conceding that it was “not exciting,” TIME’s own Joe Klein praised Obama for sticking to his guns—offering his critics words but not a policy shift. The Post‘s David Ignatius thinks the president “articulated the right structure for U.S. foreign policy going forward,” though he frets about leaving Afghanistan too quickly. Terrorism expert Peter Bergen heard a sensible antidote to Bush-era militarism.

Still unclear is the reaction of the audience Obama cares about most of all: the public. It’s not uncommon for elites to pan a presidential speech that kills in the heartland. With Obama’s foreign policy approval ratings underwater as Democrats head into a daunting midterm election, the White House must be rooting hard for another case of insider-outsider disconnect. At the moment, however, Obama’s grand address is in danger of a failing grade. 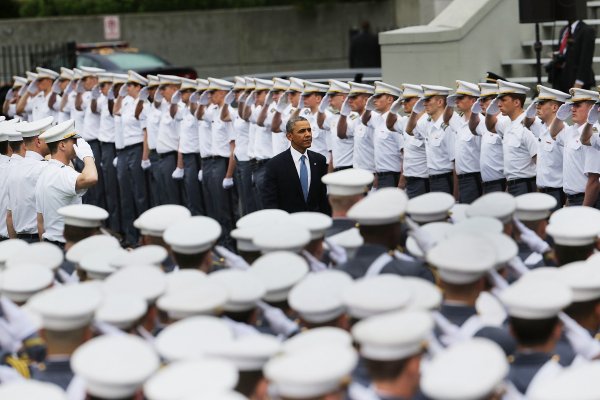 Obama Sticks to His Guns
Next Up: Editor's Pick