Thai military officers arrest a protester as tensions rise during anti coup protests in Bangkok on May 28, 2014
Paula Bronstein—Getty Images
By Charlie Campbell

Many prominent activists and politicians were released by Thailand’s ruling military on Wednesday, but a brief Facebook blackout had opponents of last Thursday’s coup convinced that the junta was embarking on even more draconian censorship.

On Wednesday, the junta claimed to have released 124 people, but 76 politicians, intellectuals and activists remain in extrajudicial detention. An additional 53 individuals summoned by the military have not reported as ordered, said a spokesperson.

One of those released was Thida Thavornseth, the former chairwoman of United Front for Democracy Against Dictatorship (UDD), the main Red Shirt organization. She remains under house arrest and was warned not to leave the country or participate in political activities.

“[The military] will be in trouble if they stay in control for a long time,” she tells TIME. “Not from UDD members, but middle-class people and intellectuals cannot have their freedom taken away. They should have a roadmap and pave the way for new elections.”

Also on Wednesday, Facebook went down for around 40 minutes, prompting outrage across the social-networking-obsessed Southeast Asian nation and eliciting this wry tweet from political commentator and journalist Saksith Saiyasombut.

Dear selfie-taking, Suthep-cheering, pro-#ThaiCoup supporters: THIS is what you get! No Facebook and Instagram for you! #Thailand

Although the army initially denied that it had ordered the blockage, Surachai Srisaracam, permanent secretary of the Information and Communications Technology Ministry, told Reuters, “We have blocked Facebook temporarily, and tomorrow we will call a meeting with other social media, like Twitter and Instagram, to ask for cooperation from them.”

On May 22, Thai army chief General Prayuth Chan-ocha seized power in the country’s 12th military coup d’état since the end of absolute monarchy in 1932. Key politicians, academics and activists have been arbitrarily detained, television channels taken off air and a nightly curfew imposed, although the latter may soon be lifted in key tourist zones.

Former Education Minister Chaturon Chaisaeng is one of those still detained, and is due to be tried in military court later this week for his criticism of the coup.

“The military trial of a civilian without a lawyer, or means to prepare a defense, is really no trial at all but a travesty of justice,” said Brad Adams, Asia director at Human Rights Watch. “The Thai junta should immediately end its arrests of peaceful critics and revoke its order allowing the trial of civilians before military courts.”

Many others remain in hiding. “I had to leave my home as some of my friends were arrested, and I didn’t feel safe,” one activist, who asked to remain anonymous, says by phone from a safe house in the northern city of Chiang Mai. “I feel horrible, I don’t know what will happen.”

General Prayuth received royal backing for his coup on Monday, but refused to answer questions regarding a timetable for elections. Reconciliation centers have been set up around the country, and debts owed to rice farmers from a calamitous pledging scheme, run by the now deposed government of Prime Minister Yingluck Shinawatra, are being paid.

Nevertheless, the national economy continues to suffer. GDP shrank 2.1% in the first quarter of 2014, and factory output tumbled 3.9% in April from the previous year, marking over a year of consecutive monthly declines. The crucial tourist industry makes up 10% of GDP, but footfall is slated to plummet up to 40%. Experts say a recession is likely.

Scores of high-ranking police with alleged links to the beleaguered Shinawatra clan have meanwhile been removed from office. While the military top brass is perceived as favoring the political establishment, the police force is considered a pro-Shinawatra institution.

Both pro- and antimilitary demonstrations continue in Bangkok, though numbers are dwindling. At the Victory Monument, security officials were jeered, plastic water bottles hurled and anticoup slogans spray-painted on an army Humvee.

“We want the military to step down, this is not freedom,” says Theerac Arrom, a 20-year-old philosophy student at Bangkok’s Mahidol University. “People must be able to criticize, analyze and understand their government. But my country just lies sleeping.” 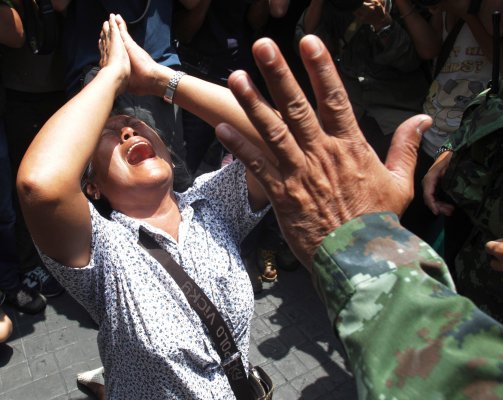