A Legal and Moral Basis for Reparations

As recently as 2009, the U.S. Senate passed a resolution belatedly apologizing for this country’s oppression of African Americans: “The Congress (A) acknowledges the fundamental injustice, cruelty, brutality, and inhumanity of slavery and Jim Crow laws; (B) apologizes to African-Americans on behalf of the people of the United States, for the wrongs committed against them and their ancestors who suffered under slavery and Jim Crow laws.”

Sadly, these mostly white senators added a disclaimer explicitly barring African Americans from seeking reparations for the role of the government in this officially recognized oppression. Reparations is an issue that arises sporadically because of the three-plus centuries of slavery and Jim Crow on which this country is founded, and one that Ta-Nehisi Coates revives in this month’s Atlantic Monthly.

One rationale for reparations lies in the reality of the stolen labor and millions of African Americans enslaved until 1865, legally segregated from the 1870s to the 1960s, and who face much discrimination today. This theft of labor and lives was carried out for centuries by whites as individuals and by local, state and federal institutions backed by law.

A legal basis for reparations could rest in the concept of unjust enrichment, an idea traditionally associated with relationships between individuals. Unjust enrichment involves circumstances that “give rise to the obligation of restitution, that is, the receiving and retention of property, money, or benefits which in justice and equity belong to another,” according to Ballentine’s Law Dictionary. One can extend the idea of restitution for unjust enrichment to the conditions of large-scale group oppression.

Implicit in the idea of unjust enrichment is the counterpart idea of unjust impoverishment, the condition of those suffering at the hands of those unfairly enriched. From the 1700s to the mid-1800s, white families and communities were enriched directly, or by means of economic multiplier effects, by slave plantations and related economic enterprises. Economist James Marketti once estimated that the labor stolen from enslaved African Americans from 1790 to 1860 was worth in the range of $2.1 to $4.7 trillion (in 1983 dollars), after taking into account lost interest.

Those who have attacked the idea of owing back wages to African Americans, arguing those are too-distant debts, ignore the huge damages done to African Americans during the century of near-slavery during Jim Crow segregation. Millions alive today suffered severe losses under Jim Crow and can actually name who did much of that discrimination and unjust impoverishing. The current worth of all black labor stolen by whites through the means of slavery, Jim Crow, and discrimination (plus interest) is estimated by some economists in the range of $6 to $24 trillion. And this figure doesn’t include compensation for great physical and mental suffering and millions of untimely deaths.

Most whites whose families have lived in the U.S. for generations benefit from significant racial advantages their ancestors gained under slavery, Jim Crow or post-1968 discrimination. An examination of generational histories of white families and families of color by sociologist Jennifer Mueller found huge differences in the acquisition and transfer of economic assets: compared to families of color, white families had “more than six times as many transfers of monetary assets across generations.”

Large-scale homestead acts operating from the 1860s and federal housing and veterans programs after World War II also mean that many white families have benefited and secured significant assets from “white affirmative action.” The Homestead Act of 1862 provided 246 million acres of productive land, and wealth, for 1.5 million families over seven decades. Depending on calculations for things like marriage and childbearing, social scientist Trina Williams estimates that 20 to 93 million Americans, overwhelmingly white, are current beneficiaries of this one asset-generating program. In Mueller’s family histories, whites reported five times as many instances of garnering such government-derived assets over multiple generations than did families of color. Not surprisingly, the 2010 Survey of Consumer Finances found huge racial differentials in family wealth. White families’ median wealth is about eight times that of black families, and this gap has grown in recent decades.

Most whites consider reparations for damages suffered by African Americans to be too radical, but white politicians, judges and ordinary citizens have accepted the principle of reparations for certain past damages. U.S. courts have required corporations to compensate deformed children of mothers who took drugs during pregnancies without knowing of harmful side effects. That those decisionmakers were long gone didn’t let the corporations off the hook. Significantly, the U.S. government has actively pressured the German government since World War II to make large-scale reparations to victims of the Holocaust, although those making the reparations were not part of Nazi governments.

The moral principle here is similar to that asserted in arguments for reparations for contemporary African Americans, whose socioeconomic conditions reflect damage done by past and present generations of whites. Additionally, federal appellate Justice John Minor Wisdom has argued that the anti-slavery amendments to the U.S. Constitution set a constitutional principle for government remedial action: “When a present discriminatory effect upon blacks as a class can be linked with a discriminatory practice against blacks as a race under the slavery system, the present effect may be eradicated under the auspices of the thirteenth amendment.”

Contemporary reparations might take several forms. One would be the gradual transfer of compensating wealth from unjustly enriched white communities to unjustly impoverished black communities, a government transfer linked to explicit restorative goals. The National Coalition of Blacks for Reparations in America has sought $400 million for both individual compensation and asset-generating programs enabling impoverished black communities to prosper. Substantial reparations would include providing well-funded government programs, over generations, at local and state levels for upgrading education, job training, housing and incomes for African Americans – as individuals, families and communities.

Many argue there is no money for such moral and constitutional action. Yet, the U.S. government found more than a trillion dollars to bail out private institutions in the Great Recession—and trillions for recent irresponsible military actions. A U.S. government that was heavily involved in sustaining slavery and Jim Crow, and is implicated in contemporary discrimination, can find the substantial amounts needed to meet this country’s moral and restorative obligations to long-oppressed African Americans. 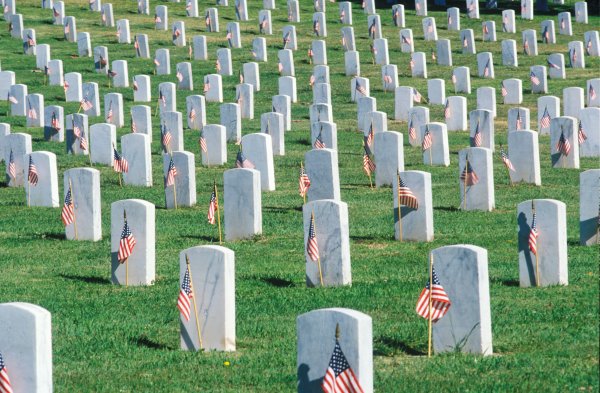 Memorial Day Should Be About Forgetting
Next Up: Editor's Pick