The Muslims of the Central African Republic Face a Deadly Purge

Chadian civilians climb on a military chadian truck to go back to Chad on Jan. 15, 2014, in the PK12 district of Bangui.
Eric Feferberg—AFP/Getty Images
By Andrew Katz

The anti-balaka have outgrown their name. These militias in the Central African Republic, once united under a moniker meaning “anti-machete” in the local Sango language, are exacting their own vicious revenge upon the mainly Muslim rebels who overthrew the government last March and waged months of terror against the Christian population. They are now accused of atrocities far worse than what first prompted them to take up arms.

An Amnesty International report on Feb. 12 said attacks on Muslims in January by anti-balaka militias, made up of Christians and animists, had amounted to “ethnic cleansing.” Fatou Bensouda, chief prosecutor at the International Criminal Court at The Hague, has already opened a preliminary investigation into crimes against humanity, saying some “victims appeared to have been deliberately targeted on religious grounds.” A top U.N. official issued similar warnings during a recent visit to the ravaged capital, Bangui, telling reporters: “There is an ethnic-religious cleansing taking place. It must be stopped.”

The campaign of looting and murder in recent weeks has led to an alarming demographic crisis in the Central African Republic. About 1 million of its 4.6 million people have been displaced and at least 2,000 have been killed. Muslims account for 15 percent of the population, or about 690,000 people; Médecins Sans Frontières said in a conference call with reporters on Feb. 18 that at least 80,000 had already left.

Entire neighborhoods in Bangui and towns in the northwest have emptied as a mass exodus pours into neighboring countries Cameroon and Chad. Aid groups fear the fleeing of Muslim traders and cattle herders, who are crucial to the country’s food production and distribution, may spark a famine.

The scene today vastly differs from last year. “If you drove across the country in November, you would have been impressed by the power of the Séléka,” says Joanne Mariner, a senior crisis adviser with Amnesty in Bangui, referring to the impact of the rebels’ offensive that began in late 2012. “Now if you drive across the country, you find anti-balaka everywhere. They are the people who are in control of the roads and the majority of the towns.”

William Lacy Swing, director-general of the International Organization for Migration and a young U.S. envoy to Bangui in the mid-1970s, was “shocked” by the scenes there during a trip in early February. “The Central African Republic that I knew at the time, this element now of inter-religious conflict was absent,” he told TIME, “and now it is at the heart of some of the problems.”

How political payback turned into a sectarian purge isn’t entirely understood. Experts gesture to spillover from conflicts throughout the region as well as the legacy of decades of poor governance in the former French colony.

But the country has no such precedent of religious strife. Louisa Lombard, a post-doctoral fellow and Central Africa expert at the University of California-Berkeley, said a main cause was the systemic marginalization of Muslims that ramped up after former President François Bozizé won power in 2003. Muslims, many of whom live in the isolated and underdeveloped northeast, were largely neglected and treated like “foreigners.”

This dispossession eventually led to Séléka’s formation. The rebels, supported by Chadian and Sudanese fighters, overran the state’s decayed army in late 2012 and quickly gained control of much of the country. Bozizé appointed a prime minister from the opposition and signed several peace deals with Séléka in Libreville, Gabon, the following January. But when he failed to honor the agreements, Séléka toppled his government and installed Michel Djotodia as the country’s first Muslim president.

The rebels favored Muslim civilians and bands of fighters terrorized Christian communities; mistrust grew as Muslims were viewed as complicit in Séléka’s rampages. Djotodia dissolved Séléka in September but the rebels continued their attacks, prompting the formation of the anti-balaka squads and an uptick in tit-for-tat violence. In early December, two days of carnage left hundreds dead.

Amadou Sy, a senior fellow at the Brookings Institution’s Africa Growth Initiative, said the immediate arrival of French and African Union peacekeepers was a turning point. Anti-balaka saw the wind changing and went underground. By early January, with Séléka in retreat and Djotodia forced out by regional powers, anti-balaka had reemerged with uncontrollable fury. After weeks of killing, Lombard said, “whatever social fabric that was once there has been torn to shreds.”

The turnaround led interim President Catherine Samba-Panza to declare war on anti-balaka and France to commit more troops. Even after the security situation is resolved, easing the humanitarian crisis and maintaining global attention on this ignored nation will be difficult. As thousands more Muslims look to flee their own country, it may already be too late. 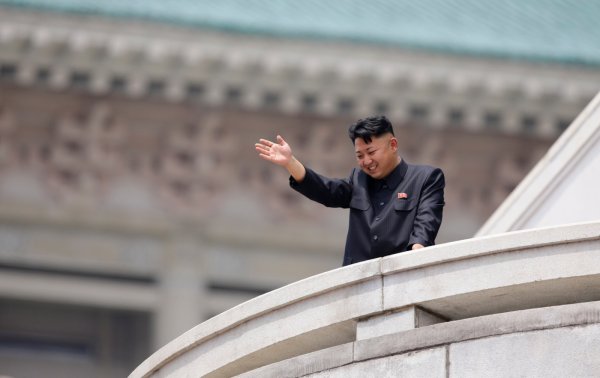 Move Over Iran! It's North Korea Americans Now Hate Most
Next Up: Editor's Pick